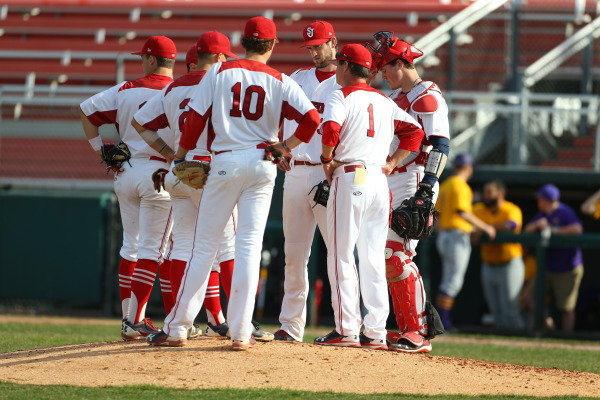 Off to their best start since 1981 and reaching as high as the No. 4 ranking in the country, the highest since the conclusion of the 1968 College World Series, the St. John’s baseball team (23-5, 1-2) saw two of its players earn Big East honors last week.

Shortstop Jesse Berardi was a catalyst for the Red Storm’s 3-0 week, which included two wins against Hofstra and one with Wagner. Berardi, a junior from Commack, N.Y., went 6-10 at the plate with four RBIs and four runs scored during the stretch in which he was awarded Big East Player of the Week. In addition to increasing his batting average to .420, Berardi hit his third home run of the season and recorded his tenth multi-hit game the series-opener against Hofstra.

As of last Sunday’s series-ending game against Hofstra, the junior ranked fourth in the nation in on-base percentage (.544), 13th in batting average and 26th in RBIs per game (1.22).

Sean Mooney, who recorded his third victory in as many outings in the game against Hofstra, was named Big East Player of the Week after claiming two Big East Pitcher of the Week Awards in March.

The freshman from Marmora, N.J. gave up one run in seven innings against the Pride, striking out seven and walking one batter on 87 pitches (68 strikes). On the season, Mooney ranks first in the country in WHIP (0.64) and 1211th in ERA (0.96). He has struck out 39 and walked five in 37.2 innings of pitching.

As of April 9th, he was only one of two freshman in Division I baseball (T.J. Sikkema of Missouri) to place in the top 25 in both categories.

Although inclement weather has altered several series, St. John’s has remained hot. The original three-game set with Hofstra was reduced to two, with one game in Queens canceled due to an anticipated storm. Last Tuesday’s contest with Saint Peter’s was also canceled.

In Wednesday’s game against Columbia, the Red Storm dropped their first home contest of the season, 7-4.

Three days later, the team traveled to Nebraska for a weekend series against Big East rival Creighton, one that the Bluejays won two games to one. St. John’s lone win was a narrow one, 3-2 in 14 innings, giving Joe Kelly his first win of the season.

The pair of weekend losses dropped the Johnnies to No. 12 in the country. They rebounded Tuesday with a 9-3 victory at home over Albany

The team will continue Big East play with a three game series in Indiana against the Butler Bulldogs starting on Thursday.