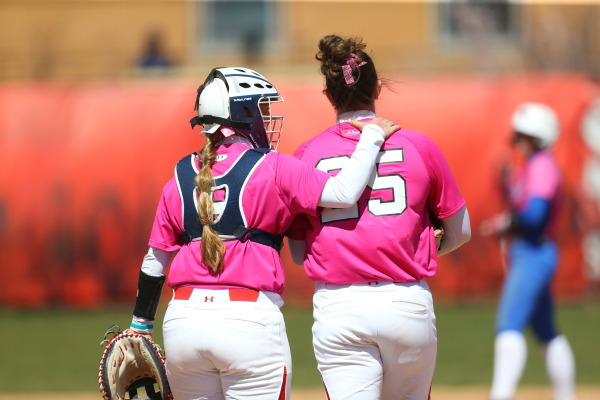 Baseball’s Comeback Falls Short
Despite out-hitting their opponent 10 hits to six, the Red Storm fell to the Columbia Lions in the first home loss of the season with a final score of 7-4.

This game marks the 23rd of 24 chances that the Red Storm has outhit their opponent this season. St. John’s (21-3) began tallying runs in the bottom of the fifth, while holding Columbia scoreless over the last seven frames.

Columbia scored six of their seven runs in the first inning and their seventh in the top of the second. Michael Donadio, Jesse Berardi, Josh Shaw, and Jamie Galazin all had two hits each for the Red Storm.

St. John’s surrendered no runs, no walks, and just two hits over the game’s last 24 outs.
Tennis Teams Roll to Easy Victories
The women’s tennis team (14-3) remains undefeated in Big East play after a win over the Providence Friars, 6-1, at the Providence Tennis Courts on Friday.

This marks the fourth straight victory for the Johnnies. Lauren Leo, head coach, has now won 14 matches in each of her first two seasons.

The St. John’s men’s tennis team (10-4) swept its opponent, Villanova, 7-0 in the regular season finale on Friday at the National Tennis Center in Flushing Meadows.

This pushed the Johnnies to their fourth consecutive year of double-digit wins in their dual-match regular season.

For the Big East matches, the Red Storm won three of five matches with two shutouts, which were Georgetown and the match Friday against Villanova.
Softball Drops Doubleheader
The St. John’s softball team lost its first two Big East games of the season against DePaul on Saturday to the Blue Demons: 10-3 and 10-7 respectively.

The games, played at Red Storm Field, were on the NFCA StrikeOut Cancer Day. The softball team currently holds an 18-12 overall record and a 6-2 Big East record.

In the first game, freshman Gretchen Bowie and juniors Krystal Puga and Lauren Zick led the Red Storm in game one, each with three hits.

The loss in game one snapped the Red Storm’s six game winning streak. In game two SJU had seven runs on 11 hits, but it was not enough to secure the game that featured four lead changes.

The Red Storm will continue play with a three-game set against Butler this weekend.
Lacrosse Stumbles at Marquette
The St. John’s lacrosse team, holding a 1-10 record with a Big East record of 0-2, lost to Marquette on Saturday at the Valley Fields in Milwaukee, Wis..

The Johnnies fell, 17-9, to the Golden Eagles despite a season-high four goals from freshman Joe Madsen. Pat Smyth led the Red Storm defense with four ground balls and caused one turnover.

Tim Kiel and Brian Gaffney each caused a turnover. Daniel Costa played 55:52 in goal, saving nine of the 24 shots that he faced.

Freshman Brian Quick also saw time in goal, making one save in his five minutes on the field.

A tough matchup awaits the Red Storm on Saturday. They will take on Denver at home in another conference matchup. The fourth-ranked Pioneers won the 2015 NCAA lacrosse championship and made an appearance in the NCAA Tournament last season.

The Red Storm will honor their seniors against Denver with a pregame ceremony before trying to snap their six-game losing streak.