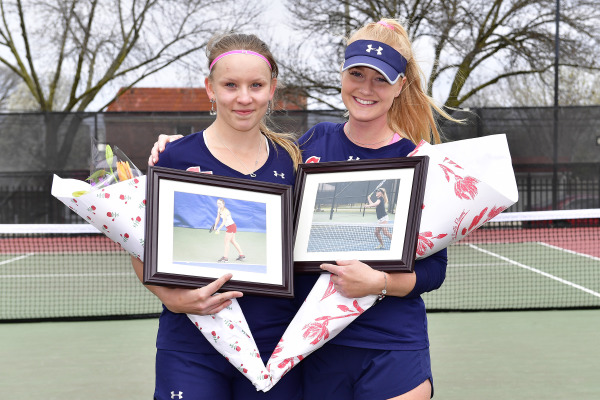 It was a rare losing streak for the Johnnies, but they made it a quick one after defeating Albany 9-3. Michael Donadio lead the way for St. John’s, going 4-5 with three RBI’s.

Things got started early, as the Red Storm scored four runs in the second inning. They would add two more in the fourth, capped off by John Valente’s first home run of the season in the fifth inning.

Albany answered with two home runs in the sixth, but St. John’s continued to add to their lead, and finished with nine after Jesse Berardi hit a sacrifice fly to center. The Red storm improved to 23-5.

This week, the Red Storm will take on Fairleigh Dickinson in a three-game series at home. The matchup between the two teams will begin on April 21 and runs through Sunday afternoon. It is their last non-conference series of the season, although they play individual games against non-Big East foes three more times this season.
Women’s Tennis Senior Day a Huge Success
The St. John’s women’s tennis team ended the season on a high note Saturday afternoon, beating Fordham 5-2 on Senior Day.

Seniors Anna Morozova, and Stephanie Elgegren were honored before the game for their contributions to the program.

The Red Storm only mustered four hits all afternoon, but one of them was a home run by freshman Marissa Rizzi. It was her first of the season.

The Johnnies didn’t go down easy, and loaded the bases in the bottom of the seventh, down only two runs.

However, Iona pitcher Marnie Skinner ended the game with a strikeout, and St. John’s fell to 19-13 on the season.

As of April 18, St. John’s has multiple players in the top 10 of several statistical categories in the Big East, including Gretchen Bowie and Savannah Warren placing second and third in RBI, respectively.

McKenzie Murray, Madison Morris and Tori Free are all on the leaderboard for ERA. Murray leads the team with a 2.78  ERA.

The Red Storm faces off against New York City rival LIU Brooklyn on April 19, and follow that contest up with a key Big East series against Villanova at home that could put St. John’s further ahead in the conference.
Lacrosse’s Struggles Continue on Senior Day
It was Senior Day for St. John’s lacrosse, as seniors Dante Addona, Brian Gaffney, Nick Heller, Jack McClellan, Jackson O’Leary, Scott Scannell and Kyle Skramko were honored in a pre-game ceremony with family, friends and administrators before a game with the Denver Pioneers.

The Johnnies closed out their last game in Queens with an 18-12 loss, highlighted by the Red Storm’s leading scorers, Heller and freshman Joe Madsen, combining for nine points and eight goals.

Madsen scored on every shot he took, scoring five goals on five shots, and adding to his total of 18 goals on the season.

Madsen gave the Red Storm their only lead of the day by making it 2-1 at the 3:43 mark.

However, the Pioneers scored four times in the last two minutes of the first quarter, and never looked back, dropping the Johnnies to 1-11 on the season.

The Red Storm face another tough opponent this Saturday, when they travel to Pennsylvania to take on Villanova, who has won three of their last four games. Their season finale is April 29 against Georgetown.