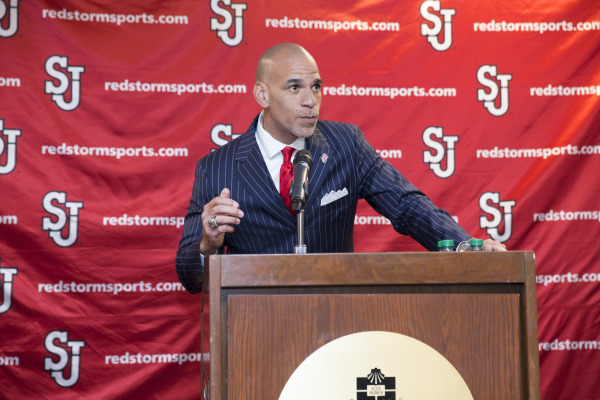 The bitterness of November’s autumn and the darkness of its mornings followed Anton Goff as he walked from his car to his office next to Taffner Fieldhouse. He’d only been in Queens for a handful of weeks, still adjusting to the 105-arce campus 116 miles away from his old job at the University of Hartford.

For his first three weeks, Goff walked by Carnesecca Arena and through a hallway with trophies and awards encased by glass, by himself in the silence of the predawn hours.

To the right of his office door is a large red plate, his name and “Director of Athletics” appearing in white letters. Every day for those three weeks, an unknown figure stared at him through the vacancy of his workspace, its face hard to make out until he flipped on the light switch. The only visible evidence a blue, red and brown sweater covering its torso.

It was a cardboard cutout of Lou Carnesecca, the former St. John’s men’s basketball coach who led the team during the glory days of the Big East of the 1980s.

“It would startle me every morning,” Goff said. “I would always forget it was there. And I was like, ‘Look, man. I’ve got to get this cutout out of my office.’”

Eventually, Goff had the cutout removed. “It’s in some other guy’s office,” he joked. The sweater, however, is now framed opposite of the red banner that Goff just had installed in the office.

“Embrace excellence in everything you do,” it says above a shot of Madison Square Garden. “We are New York’s team. We are St. John’s.”

Now in his fifth month at St. John’s, Goff keeps Lou’s sweater as a reminder of the greatness that preceded him, and the legacy he looks to build as the sixth athletic director in school history.

Hired just over a month before Christmas, the Pittsburgh, Penn. native developed a love for Big East basketball. His mother was the assistant athletic director and head track and field coach at the University of Pittsburgh, who competed in the Big East until 2013.

“I grew up during the days of the old Big East of the 80s,” Goff said. “When Chris Mullin and was playing against Patrick Ewing at Georgetown and playing against Jerome Lane and all those guys over at Pittsburgh.

I grew up a Big East guy, and always fond of St. John’s, and everybody in the Big East. And when the opportunity came up, I really looked at it and said, ‘hey man, you know what? New York City, St. John’s University, match made in heaven.’”

The decision to come to Queens was an easy one for Goff. After spending two-and-a-half years at Hartford as their athletic director, where he oversaw and conducted significant improvements in both athletics and academics, Goff quickly jumped on the opportunity to assume the role that had been vacant since Chris Monasch resigned in May 2015.

“I felt like I could fit in well here, and I felt like I could bring some leadership qualities and my passion to get St. John’s where it wants to be and where it needs to be,” Goff said of the interviewing process. “I had long conversations with a lot of people on campus, and then finally came down here three or four times, in the city as well as close to campus and met with all the board members. Met with administrators, coaches, and it seemed like it was a good fit, and they offered me a position and I jumped on it.”

Having a firsthand experience with collegiate athletics through his mother, Alfreeda-who also served as the Horizon League’s senior associate commissioner and chief championships administrator for 17 years-and wife Wendy, Goff has always had a passion for student-athletes and the programs for which they play since he was young.

“I tell people all the time that I wasn’t born to be an athletic director, but I was raised to be one,” Goff said. “I literally grew up in athletic offices. By the time I think I was 12, I knew everything that happened behind the scenes of an athletic department at the college level.”

Now in his third athletic director position, Goff has already developed plans for St. John’s and its student-athletes. His diligent work behind closed doors and away from campus stands out through his connections with those who he believes will help take the school to a level never seen before.

“I’ve been in the city probably three or four times a week meeting with what we call captains of the industry,” he said. “People that are CFOs and CEOs of different corporations and businesses within the city. Just trying to make that connection, because I think we’re on the precipice of being really, really good. So I want these types of individuals to buy into what we’re trying to do as we improve this brand.”

That brand has more to do than with recognition and trophies. The “embrace excellence” banner in his office is his motto, the calling-card for St. John’s athletics and what it means to a city longing for success.

Goff, whose emphasis on fundraising goes back to his days as AD at Division II Bowie State University in Maryland, plans to connect New York and St. John’s in various ways. The first is through basketball and Carnesecca Arena, which Goff would like to either renovate or develop entirely from scratch.

“That’s one of the priorities that we’re looking at,” Goff said of the 5,600-seat complex. “And whether that’s to do something to renovate the arena, or build something new, we’re just trying to go through it all, to self-study right now.

For now, Goff is focusing on many of the other sports, including the school’s top-15 ranked baseball team and other successful programs, including women’s soccer finishing 11-4-5 and softball, who currently sits atop the conference.

In terms of popularity, basketball always draws the biggest crowds. The other sports, however, struggle to get fan support at games, an issue Goff has already addressed and talked about with various groups on campus.

“I actually met with the RedZone, our student fans, and talked about pushing out information about games on campus,” he said. “It’s tough sometimes, students have a 1000 things to do. But at the end of the day, we want students to support students. Just as when students are putting plays on or having lectures, we need to support them. It has to be a two-way relationship.”

Another area of concentration for Goff is academics. Having played wide receiver at Bowling Green University from 1986-1989, Goff understands the demands put on student-athletes. Upon starting his career at Kent State as an academic counselor in 1995, Goff soon helped to increase the academic success rate at Bowie State among student-athletes.

From 1998-2001 at the University of Maryland, he served as assistant director for academic support and created an academic program for the men’s basketball team. And although he acknowledged that St. John’s does not fall into the category of academic struggles or scandals, he spoke of the culture he wants to continue in his new position.

“We have a student-athlete development and academic support unit that does great work here,” Goff said. “They report to the provost’s office. It’s already set up. Our student-athletes are achieving at a high level. I have a saying, ‘four for 40.’ The four years you spend at St. John’s University are going to affect the next 40 years of a student-athlete’s life.”

For Goff, the success of St. John’s athletics extends beyond the courts and fields in which it represents. A former life skills coordinator, Goff sees St. John’s succeeding in aspects of living that have greater benefits than wins and titles.

At his introductory press conference on November 14, Goff stood at his podium and powerfully addressed the audience. “We’re going to win,” he exclaimed. “We’re going to win the right way. This isn’t just about returning to the glory days of the 80s when St. John’s was on top.”

For him, it’s about taking St. John’s to its full potential, the pinnacle of greatness.

The right way, as he explains, boils down to following the rules and not taking any shortcuts. To not have banners taken down when he leaves and Coach Mullin retires from coaching basketball.

“We have to build a program that’s lasting, not a team,” Goff said. “Not a flash in the pan where, ‘hey, we won a bunch of games,’ and the whole thing falls apart.”

Goff’s words speak to St. John’s as a whole, not just the athletic department. For 18 months, the school searched for a voice that would bring its values of academics and service and its athletic prominence into unified fruition. Five months later, everything Goff and the university talked about has been followed and put into action.

When his time at St. John’s comes to an end, Goff hopes to leave one hundredth of the legacy left by Coach Carnesecca, the man who Goff says has him in awe every time they see each other. More than that, Goff wants to establish a program that competes, one that finishes atop the conference and plays in Sweet 16s and championship games on a daily basis. That legacy, he believes, will stand forever.

“I want [fans] to think of excellence,” Goff said. “I want them to think St. John’s personifies excellence in everything we do. Whether it’s in the classroom. Whether it’s on the fields, the courts, or whether it’s contributing to community service.”

With one last thought before the buzzer sounded on the afternoon interview, Goff sat up in his chair and unfolded his hands, the red SJU pin on his blazer’s left lapel more prominent now than it was previously. His last message was one of hope, one of anticipation for what’s to come in the future at St. John’s.

“Whatever we accomplish is going to be a university and community accomplishment,” he said.