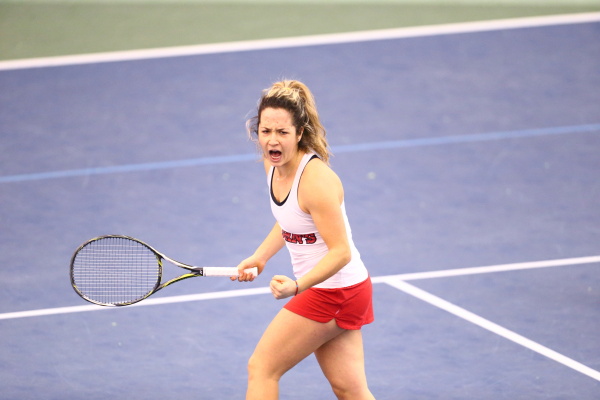 The story reads like a picture-perfect fairytale. The daughter of an ex-tennis player grows up with a racket in her hand, becomes a coveted talent, and helps her school break records.

Upon first glance, it looks too easy for St. John’s freshman Jessica Livianu. Her mother, Bagdana Romanksy-Livianu, played professional tennis, turning her daughter onto the sport at a young age.

After rising through the junior circuit and becoming a five-star college prospect, the younger Livianu committed to St. John’s and has led the team to their first appearance in the Big East Tournament as the top seed in program history.

Livianu, however, is more than just a made-for-Hollywood story. The Brooklyn, N.Y. native, currently ranked 65th in the latest Oracle/ITA Division I singles rankings, uses her success as a platform to grow as a person and as an athlete.

“I’ve learned so much [from being on the team], and I’ve grown as a person immensely,” Livianu said. “I realized that I was putting unnecessary pressure on myself [at the beginning of the semester]…I focus more on my game as a whole for me to grow.”

She came into an enviable position when she arrived in Queens in August. The women’s tennis team won 14 games last year and has leaders in now-seniors Anna Morozova and Stephanie Elgegren. Livianu immediately established herself as the premier player on the roster, making it to the ITA Northeast Regional finals.

Despite her loss, Livianu became the de facto leader on the court, where she says adaptability is key.

“I think the strongest part of my game is that I can modulate,” she said. “At one point I can be extremely aggressive and get to the net or close the point quickly, and at another point I can be a defensive player and just run down the shots that I need to run down.”

Her only two losses in singles play this spring were to ranked opponents, and she won 19 consecutive doubles matches with Morozova to finish the year.

Her success translated into marks in the win column for the Red Storm, who won 16 matches this season, the most since 1989-1990. Head Coach Lauren Leo, who Livianu has known since she was a child, also set the record for most wins through the first two seasons at the helm.

Records were made to be broken, and Livianu says that she loves the pressure that comes with them, but she doesn’t always think big picture.

“Billie Jean King once said, ‘Pressure is privilege,’” she said. “The more pressure I have, the more grateful I am for what I’ve accomplished. ”

In fact, Livianu prefers to attack things one step at a time. Her busy schedule forces her to be efficient with her time, and she says that the only way to effectively use all of the hours in the day is to go at each task with 100 percent of her focus.

The only thing on her mind right now, though, is the conference tournament in Cayce, S.C. that starts Friday. This week, Livianu said that she is calmer than she has ever been before a match.

Part of that may be due to the Red Storm’s dominance over the Big East this year. The women’s tennis team went 6-0 in-conference this year the first time that they went undefeated against those opponents since the spring of 2014.

“When we get ready for a big conference match, we say ‘Okay, we have to step it up,’’ Livianu said. “It’s the preparation that’s the most important thing.”

This weekend will be the ultimate test for the Red Storm. They could play a total of three matches in three days if they continue to win.

They have never won a Big East championship, but Livianu may be just the spark they needed to break get over the hump and earn some historic hardware.

Sure, Livianu may have been on the path to stardom since childhood. Mentally, though, she takes nothing for granted, even if she recognizes how phenomenal she’s been in only one year of college.

“I can’t take all the credit for all of the success I’ve had this semester and last semester,” Livianu said. “Everyone has been there to support me… I saw a great saying that I love to share. It says, “If your dreams don’t scare you, they’re not big enough.’”