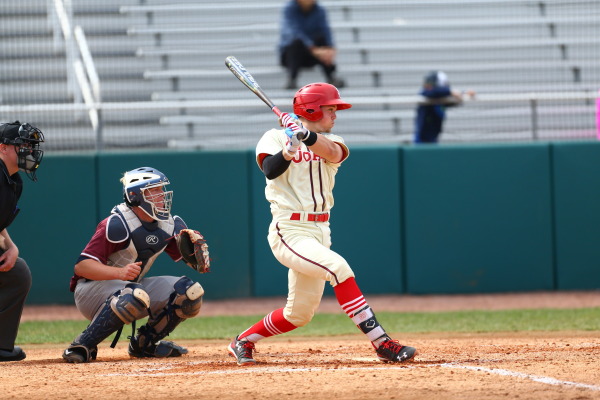 St. John’s Softball goes 1-2 on the weekend vs. Villanova
The softball team began a double-header on Saturday with a tough 2-0 loss. Tori Free pitched a strong game but hits were hard to come by on the offensive side and they were unable to score a run. Free gave up two runs on four hits in seven.

The Johnnies bounced back however with an emphatic victory, 10-0. Sophomore Madison Morris shut Villanova out in six innings, allowing only two hits. Lauren Zick had a big offensive performance, going 3 for 4 with three RBI’s and two runs. Christina Melendez hit a three-run homer to end the game.

The Red Storm will play again when they face off against Farleigh Dickinson on April  26 in New Jersey.
St. John’s Lacrosse falls to Villanova
The lacrosse team took on the Villanova Wildcats in Pennsylvania this weekend but couldn’t come up with the win, falling 18-3 to the 9th ranked offense in the country. Colin Duffy, Jason DeBenedictis and Joe Madsen all netted goals throughout the game, with freshman Madsen grabbing his team-leading 19th goal of the season.

Goalie Daniel Costa played the entire game and saved 12 of 30 shots on goal. Villanova’s Jack Curran became the school’s record holder for most goals scored in a single season, getting eight on Saturday, good for a total of 42 on the season.

The team will get back into action this Saturday, heading to Washington, D.C. to take on Georgetown.
St. John’s Baseball grabs two wins vs. Farleigh Dickinson
The baseball team prepared to take on Farleigh Dickinson for a three game series this weekend, but Friday’s game was cancelled due to bad weather ruining playing conditions.

The Johnnies scored a run in every inning but the second and seventh.

Their biggest inning was the third, in which they drove in three off a fielder’s choice and a two-RBI single. Jesse Berardi got three RBI’s and a run off of a hit. Catcher Troy Dixon drove in two as well, going 2 for 3.

On Sunday, they faced off once again and both teams put on an offensive showcase. St. John’s came out with the win, 15-8.

Junior Anthony Brocato had a big game, hitting two homeruns and drove in four Dixon and John Valente also both drove in three RBI’s, with Dixon earning two runs to go along with them and Valente earning one.

This sweep brings the 13th-ranked Red Storm to 29-5 on the season.