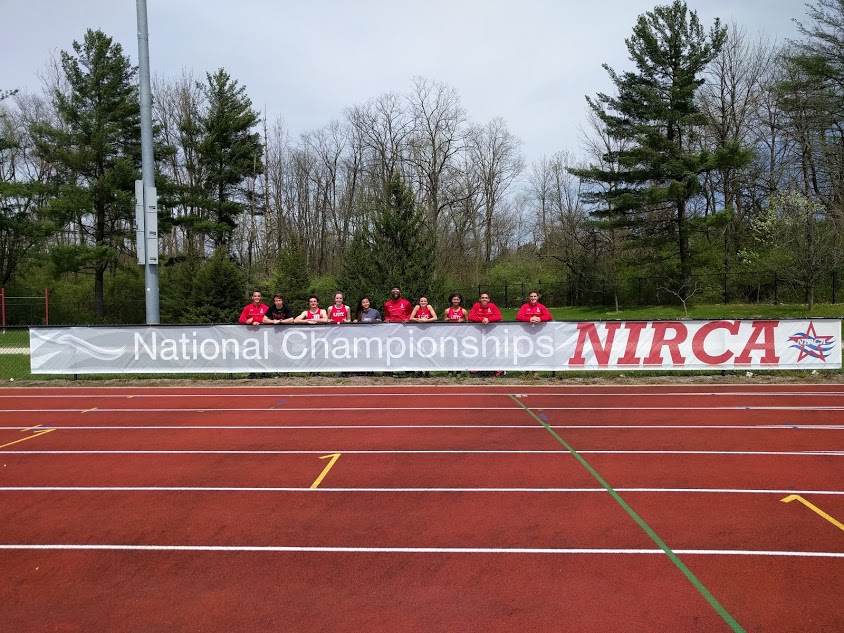 This school year hasn’t been the most successful for St. John’s athletics. To date, only the fencing team can claim national success at the Division I level; the men’s team finished sixth at the NCAA Championships and they had two individual National Champions.

Beneath the glossy shine of a Division I label, where teams have to fundraise for transportation and students organize game schedules, is where the Red Storm found its footing. The St. John’s Track Club, in disarray just a few years ago, reached heights that no official sport could.

“We’ve been training since January,” said John Fullam, President of the Track Club. “The goal for many of us on the team has been to make it to Nationals and do well. We didn’t want to just go to Nationals and not do our best.”

The men’s club team finished 10th overall at the National Intercollegiate Running Club Association Track & Field National Championship Meet on April 8 and 9 in Bloomington, Ind., and the women finished 12th. Between the two, seven of the nine St. John’s competitors received All-American designation, meaning they finished ninth or better in their event, and they broke nine team records in the process.

To top it all off, junior Mike Zeno came back to Queens as an individual National Champion in both the high jump and the triple jump. Zeno was named the Field Event MVP for scoring the most points in the field portion of the event.

It was a meteoric rise to the top of the leaderboards for the club that could barely schedule a meet just two years ago. It took an intense retooling of some of the club’s rules and values to build the club back to where Fullam has it now.

“Before September, we didn’t have an Executive Board,” Fullam said. “Everything we do is student-run. There are a lot of long nights. We put in a lot of work every week just to keep it going.”

A large part of the track club taking themselves seriously is a trifold financial base that still leaves them in the lurch at times. Even though they are not an NCAA intercollegiate program, they still receive funding from the athletic department, which Fullam said is vital to the club’s most basic needs.

“We literally cannot survive without [the athletic department],” he said.

Sometimes, though, their budget isn’t enough, and they have to fundraise to cover the rest of their costs. Fullam said that their most recent fundraiser, a raffle loaded with over 20 prizes, raised $2,000, which was just enough to cover the van they rented to make the 14 hour trip to Nationals.

In a world where collegiate athletics are at their most visible and most profitable, it seems unfathomable that a team would have to gather their own funding. It’s even more obscure to have team members take money out of their own pocket, but that’s exactly what the track club has to do. Their $25-per-semester fee is in its second year and, according to Fullam, secures any remaining financial capital that the club needs.

“[The fee] probably does turn off a few people, but at the same time it makes people actually commit to the club,” Fullam said. “We don’t want people to just show up once and wander away. It pays for team dinners and other fun events, so you’re definitely getting your money’s worth.”

Fullam said that he has spent many long nights with his executive board this year, trying to complete the team’s turnaround from mess to success. The club also runs cross country events in the fall as well, averaging eight competitions per semester instead of the three that they would schedule per year under the old regime.

A lot of their success this year, he said, came from their volunteer coach and St. John’s alumnus Eric Schrick. Having an authority figure that can run their daily practices, Fullam said, brings the track club to a level that he never thought possible.

“Hopefully we can pay him something [in the future] because he deserves it,” Fullam said. “He coaches us like we’re a real college team.”

Student support, he said, would help the team continue to perform at a Division I level. While they may not become an official sport anytime soon, Fullam said that the best they can hope for is continued success at the club level.

“We are happy to have the club team, which is open to everybody,” he said. “If by chance the men’s team is reinstated in the future, I think the club team will continue to exist…I think Track Club is going to get more competitive and win Nationals year after year.”