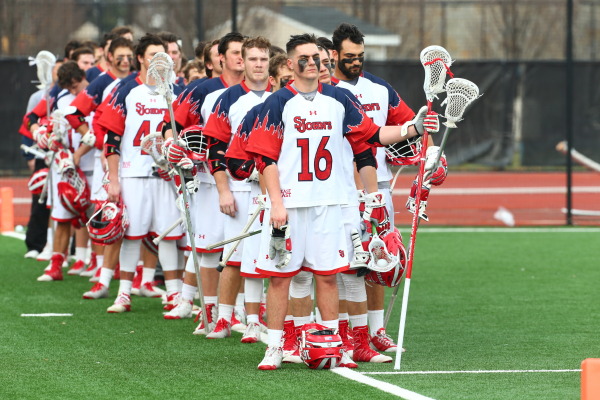 The St. John's University lacrosse team will welcome a new assistant coach to the field this spring (Photo Courtesy/Athletic Commmunications).

Success in sport can be elusive. It starts with a winning culture, established by a coaching staff that can lead with the experience of past triumphs in mind.

Men’s lacrosse head coach Jason Miller has seen his fair share of success leading the Red Storm program, compiling 28 wins from 2011-14. Yet, the good times haven’t been rollin’ at DaSilva Memorial Field in recent memory. Six contests have gone the Johnnies’ way since that 2014 season, and Coach Miller recognizes that the winds of change must blow in order for St. John’s to return to its winning ways.

“We haven’t been that successful the last couple years, [so] it’s gotta start with our culture and how we go about our business,” Miller told the Torch this week, “I absolutely believe that it’s gotta come top-down, from myself and the coaches.”

Sometimes, the best way to incite such a shift can come from a dosage of fresh perspective. Enter: Brendan Gibson.

Miller welcomed Gibson, a former Yale standout attackman, onto his coaching staff as an assistant earlier this month. The Chaminade graduate and Army veteran brings natural leadership and an aura of confidence with him to St. John’s, traits that have not gone unnoticed by his new employers.

“He’s been involved from day one…he’s got a lot to say and a lot to bring to the table and we benefit as a staff from that,” Miller remarked, mentioning the “crop of young guys at the attack position” that will benefit from having such an accomplished goal-scorer impaling wisdom every practice.

“Even I benefit from his input,” Miller said with a smile.

And such valuable input comes from an accomplished career, both at Yale and beyond. Gibson was named captain of the Bulldogs in his senior year, a prestigious honor only bestowed upon one player per Yale team. The 95 goals he scored in his college years are tied for sixth on the school’s all time list, and his 141 total points are good for tenth place in the record books.

He then courageously served our country from 2013-16, earning the Army Commendation Medal for his efforts as an all-source intelligence analyst. Upon returning home, he went back to his lacrosse roots and assisted the Chaminade freshman lacrosse team last season, before taking on his new role at St. John’s on September 1st.

Such impressive credentials has earned Gibson praise in high places. Around the time of the hire, Coach Miller spoke on the phone with Yale’s lead man, Coach Andy Shay.

“The point that Andy made to me was that he was one of the guys out front in changing the culture [at Yale],” Miller later recounted.

The conversation was music to the ears of a head coach looking to bring that winning culture back to Queens. So much time remains until the dead of winter gives way to the promise of spring. For now, all Miller, Gibson, and the Johnnies can do is work toward that new state of mind.

A victor’s state of mind.