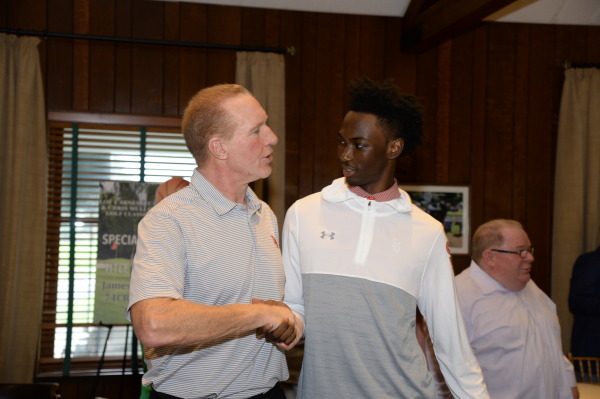 After St. John’s was ousted in the second round of the Big East Tournament last spring by Villanova, the biggest question surrounding the program was whether or not point guard Marcus LoVett would leave to play professionally.

By the time  LoVett tweeted on April 1 that he would return to St. John’s, many other changes in Queens were already in the works.

Three days earlier, Darien Williams and Malik Ellison left the program. Williams is now a graduate transfer at Nevada, while Ellison will have to sit out a year and will have two more years of eligibility after transferring to Pitt.

As Zach Braziller of the New York Post reported, Ellison left because of his perceived lack of playing time. With 6’5 Arizona transfer Justin Simon now eligible and Bashir Ahmed returning, Ellison’s minutes were likely to diminish.

Shortly after LoVett’s announcement, German stretch-forward  Richard Freudenberg left the school to pursue a pro opportunity in Europe. Freudenberg averaged less than ten minutes per game, and converted on just 20 percent of his threes.

Like last summer, Head Coach Chris Mullin and his staff were very active in the transfer market. St. John’s signed former Quinnipiac combo guard Mikey Dixon back in April. Dixon, the MAAC Rookie of the year and the Bobcats’ leading scorer,, finished twelfth among freshman throughout the nation in scoring with 16.5 points per game.

Transfer signings continued in June after sharpshooter Federico Mussini left to play in Europe, opening up another scholarship. The same day Mussini left, the school announced that Sedee Keita, a 6’9 power forward fresh off a run to the Final Four with South Carolina, would be joining the program.

A former four-star recruit (and AAU teammate of Dixon), Mullin noted that Keita’s ability to run the floor can help the team in seasons to come. It’s no secret that Mullin runs a pro-style offense based off getting stops and running out in transition, so a player like Keita, mixed with athletic forwards Kassoum Yakwe and Tariq Owens, fits right into the picture.

The offseason drama concluded in late August when four-star recruit Sidney Wilson decided to transfer, just three months after he had committed to the team. The Bronx native cited personal reasons for leaving.

Wilson’s commitment was seen as a huge get for Chris Mullin’s attempt at keeping the best players from New York City at home, much like sophomore guard Shamorie Ponds, a native of Brooklyn.

“Being in the city was more of a burden,” Wilson’s father told Rivals.com.

The day before Wilson decided to leave the school, however, former 2018 signee Boubacar Diakite reclassified to enroll early at St. John’s and will redshirt while he recovers from a significant leg injury. Diakite’s commitment leaves St. John’s with one open scholarship for the upcoming season.

According to Zach Braziller of the New York Post, the Johnnies are interested in UNLV graduate transfer Dwayne Morgan, who will graduate from school this December and will have one-and-a-half years years of eligibility remaining immediately. Braziller also said that Morgan will take an official visit campus the last weekend of September.

With the revolving door of players moving rapidly throughout the summer, the most overlooked move of the offseason could prove to be the addition of three-star shooting guard Bryan Trimble. Trimble was originally committed to play for Leonard Hamilton at Florida State, but after the Seminoles signed another freshman, McDonald’s All-American M.J. Walker, Trimble asked to be released from his letter of intent.

“[Trimble] is a versatile player with great character who we believe can make an immediate impact,” Mullin said. Trimble has reportedly been making great strides in the offseason, and could be a key  scoring option behind Ponds and LoVett. Alongside Ahmed, Simon, Tariq Owens, and now eligible Michigan State transfer Marvin Clark, the Red Storm should be able to spread the wealth offensively.

The one area of the court where the Johnnies were unable to make any progress was an immediately eligible big man. Last year, after center Yankuba Sima transferred to Oklahoma State, the front court included only Yakwe, Owens, and Williams. St. John’s often had to play small ball when any of those three got in foul trouble.

Owens and Yakwe both showed spurts of brilliance last year. Yakwe’s 14 points, six rebounds and three blocks against Marquette showed what he was capable of, and Owens battled down low for a double-double against Seton Hall’s Angel Delgado and Ish Sanogo , and secured a key offensive rebound late in last year’s upset win over Butler.

The team tried to address this through signing Derrick Walker, a 6’9” power forward who is good friends with Marvin Clark, but he eventually signed with Tennessee.

The team also returns Amar Alibegovic, a player capable of taking his opponent into the post or spotting up from three. With the additions of Simon, Clark and Trimble, plus the return of Ponds, LoVett, and Ahmed, the Johnnies could surprise many in the Big East.