Red Storm Roundup: Back to Work for Fall Teams 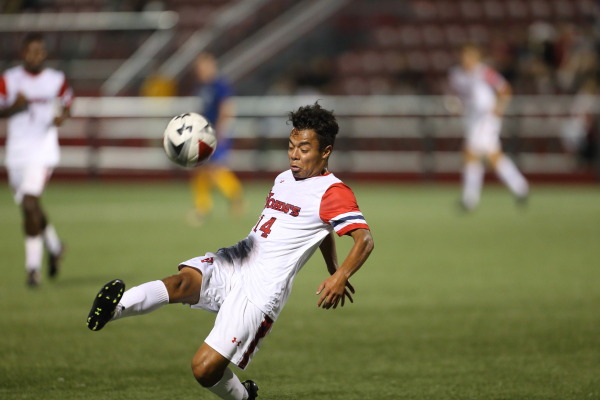 Volleyball Finishes Second in Albany Tournament
The St. John’s Volleyball team spent last weekend in Albany for a two day non-conference tournament. On Friday, the Red Storm beat the host school Albany 3-0, led by sophomore Erica Di Maulo. Di Maulo had 34 assists and 10 digs, her third double-double on the year. On Saturday, the Johnnies split with a loss to Temple in straight sets, and a win against the previously undefeated Colgate. Senior Julia Cast had a big day, leading the Red Storm with a team high 13 kills at a .303 hitting percentage vs. Temple, and 15 kills with a .350 hitting percentage vs. Colgate. The Johnnies come out of the tournament with a 5-2 record on the season, finishing second overall in the tournament.
Women’s Soccer Loses Heartbreaker to Harvard
The St. John’s Red Storm fell to the Harvard Crimson 1-0 in double overtime at the CCSU tournament in New Britain, Connecticut. Harvard scored in the 105th minute of the game, handing the Johnnies their first loss of the year and dropping them to 3-1-1. Shea Connors led the game with three shots for the Red Storm. Redshirt freshman keeper Jordan Kamp made a pair of saves.
Men’s Soccer Draws Hofstra
After 110 minutes of scoreless play, the Red Storm ended the game vs. the Hofstra Pride in a draw. Despite no scoring from either side, the two teams combined for 35 shots and 13 saves at Belson Stadium in Queens. The Johnnies best opportunity came 99 minutes in when sophomore Alistair Johnston drew in two defenders and passed the ball to a wide open Matt Forster, but the Hofstra netminder made an aggressive challenge and took the angle away from Forster. The Red Storm is now 1-2-1.
Men’s Golf Finishes 10th at Bethpage Red
The St. John’s golf team made its debut at Bethpage State Park Red Course in the Doc Glimmer Tournament with a five man veteran team. After two rounds, the Red Storm were 10th overall, and ended up carding 582 with 21 birdies on the day. The Johnnies struggled at first, but rebounded in the second round to jump four spots. The late charge was led by Gerald Mackedon and Andrew Baek who both carded a 142 (+2) on the day. On Sunday, St. John’s carded a 293, resulting in a three day total of 875. This placed them in a tie for 10th place, led once again by a low round from Andrew Baek who carded a two under 68.