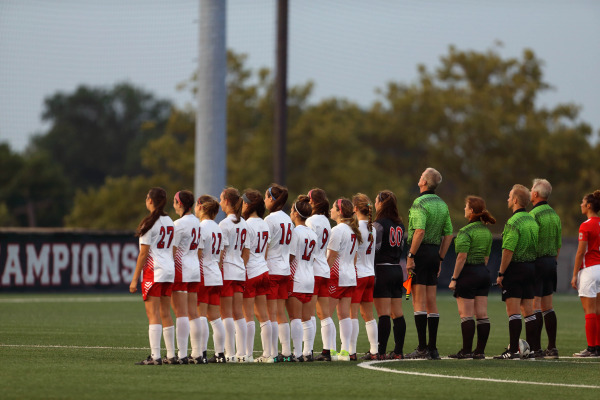 Soccer is back in action at Belson Stadium again as the St. John’s men’s and women’s soccer teams have begun a new season.

The women’s team is ready to storm back from their heartbreaking Big East semifinals loss last season. Six new Johnnies were added to the roster over the offseason and are ready to help continue the team’s winningest four-year stretch in program history.

They’ve started 4-1-1 (as of Sept. 10), with strong victories over Marist and Fairfield, followed by an exhilarating win over UConn  in the first match of the CCSU Tournament. Their first match of the season however, a drawn out double overtime grind at La Salle that was delayed three hours and forty-seven minutes due to poor weather, was an exhausting beginning to the season for the Red Storm. They’ve capped off their start with a 2-1 victory over Loyola.

Their sole loss so far came at the hands of Harvard in the second bout at the CCSU Tournament in a heart-wrenching double overtime battle in which the Crimson scored the lone goal in the 105th minute.

Head Coach Ian Stone, however, thinks the team is off to a good start as a whole.. “This team always had potential,” said Stone. “We have a lot of goal scorers. The confidence level feels good right now.”

He thinks that even in their loss to Harvard, the effort was there and the players fought. The game at La Salle was difficult in Stone’s eyes because of the delay. SJU led before the game was paused due to rain, which Stone believes led to a  loss of steam or energy naturally after reentering following the long break.

Stone believes the veteran leadership on the team makes a big difference and is one of the bigger reasons for their early success. Seniors like Allie Moar, Mariela Jacome, and Mikhaila Martinov have taken on strong leadership roles, set examples, and step up on a daily basis in practice.

“We’ve been able to compete with anyone we’ve played against,” said Stone. “All of the games have been even games. We beat UConn (a highly nationally ranked team), which was a pleasant surprise. A lot of it comes down to the seniors. They know not to give other teams too much respect, which was a problem in the past.

“We can’t be intimidated by the big teams. The past few years, we seemed to have lost in every which way. I think with our seniors now having experienced that, and seeing how we cope with situations like that, it will be different this year.”

As for the men’s squad, they have gotten off to a 2-2-1 start. They dropped two close matches with Loyola (Maryland) and Fordham, each game ending 1-0. Against Loyola, St. John’s let up an early goal in the first half, digging a deficit that they were unable to fight back from despite a second half surge of impressive play.

When they hosted Fordham, the Johnnies let up a goal from reigning Atlantic-10 Offensive Player of the Year Janos Loebe in the 68th minute and couldn’t get their own offense going again in time to spark a comeback.

In their first match, they took down Drexel in Philadelphia with a dominant performance ending in a 3-0 result. Senior Harry Cooksley assisted on two goals from Alistair Johnston and Matt Forster, along with scoring his own.

In the matchup vs. Hofstra, the two teams ended in a draw after two overtimes. It was a long physical match that resulted in a scary injury to Harry Cooksley, who did not play in their most recent contest, a 2-0 victory over Temple.

The Red Storm look to bounce back after a shaky season in 2016 (6-7-4) that ended in a bitter loss to Providence at home in Belson Stadium. With Cooksley, the team’s most skilled scorer,  sustaining a potential serious injury scare this past game, the team may need to rely upon other midfielders and forwards to step up in his place to make up for a possible offensive hole.