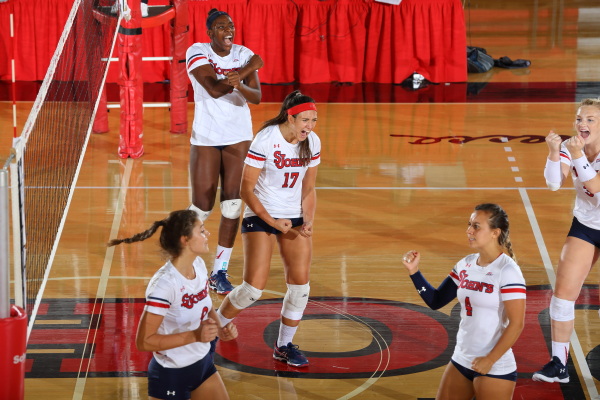 With the 2017-2018 volleyball season well underway, it’s about time to take a look at what can be expected from St. John’s this year.

The Red Storm  faces a difficult schedule this season, going up against five teams which reached the NCAA Tournament last year, three of which went on to win their Conference Championship and one who reached the NCAA quarterfinals.

More than half of the players from last year’s roster have come back  to take eight of the thirteen spots on this year’s team. Familiar names include seniors Julia Cast and Delaney D’Amore, graduate standout Danisha Moss and sophomore Erica DiMaulo. The team also welcomed freshmen Claudia Lopez, Jordan McCalla and Kayley Wood, as well as Martina Carosso, who redshirted her first year with the team.

The Johnnies took a running start at The Jack Kaiser Volleyball Classic in August, going 3-1 en route to claiming the title for the second straight year.  At the Albany Invitational this month, The Red Storm controlled the weekend, finishing, 2-1, bringing their overall record to 5-2. This weekend was another big one for the team, as it claimed its second non-conference tournament title of the season in the Cornell Invitational. Wood was named MVP of the event, while Moss and Di Maulo received all-tournament honors.

As of Saturday, the team held  a record of 7-3 with less than two weeks from the start of Big East play

St. John’s will kick off conference play with back-to-back road matches at DePaul and Marquette beginning September 22. A set of three consecutive home matches against Providence, Creighton and Villanova will begin a week later. The Red Storm will finish the regular season at home versus Butler on November 18. The Big East Tournament will start on November 24 in Milwaukee, Wisconsin at Marquette’s Al McGuire Center.