Freshman Wood No Stranger to Success

The freshman from Texas is a rising star on the court, leading the Red Storm to an undefeated record the Cornell Invitational 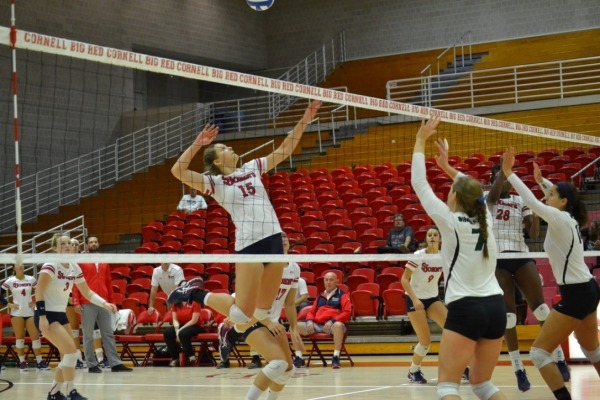 She obliterated the volleyball record books at John Cooper High School in The Woodlands, Texas. By the time she graduated last year, Wood held the records for most blocks in a season (115), most career solo blocks (282), and most career blocks (379).

She was named one of the best freshman volleyball players in the country in 2013. In the summer of 2016, Wood’s club volleyball team, Houston Junior 17 Elite Volleyball, ranked second nationally.

Now in her freshman year on the St. John’s Volleyball team, she is picking up right where she left off. Wood won MVP honors of the Cornell Invitational after the Red Storm won the title, prompting her to be named to the Big East Weekly Honor Roll.

“My biggest thing is that when I make a mistake, I’m not freaking out on the court,” said Wood about her early successes.

Wood attributes this lack of pressure to the environment that the upperclassmen have created in the locker room.

An important part of Wood’s superb start is that for her, Queens feels like home, so adjusting to college life was never a problem.

After being recruited to play at schools like ACC powerhouse Duke and fellow Big East rival DePaul, when she stepped foot onto the St. John’s campus, it immediately felt like her hometown in the Lone Star State.

“Everyone I met, the coaches, the players, and just random people I talked to her, they just made me feel like I was at home,” Wood said.

As if that wasn’t enough to make Queens feel like home, Wood’s roommate, freshman outside hitter Jordan McCalla, is also from Texas. The early relationship that they built before they came to New York went a long way for Wood.

Even after the awards this early in the season, Wood still describes herself as her own harshest critic.

“As an athlete, you’re always hungry for more. My shot selection and the way I have been seeing the court are two things that I still need to work on,” Wood said.

Wood stated that the Red Storm upperclassmen have helped her transition from high school sensation to determined college phenom. She noted that they’ve helped her with adopting to a new environment, from time management to preparing for classes and work, all while also making sure that everyone on the team is putting in the work to carry prolong their season as long as possible.

“When the upperclassmen are picking people up if they make a mistake, it’s hard not to feel comfortable playing with them.”

The strong sense of leadership is one of the reasons why Wood thinks that this could be a very special season for the team, a Big East championship in mind.

“The thing that I’ve been most impressed with so far is the work ethic of the team,” she said.

She thinks that the relentless work that she’s seen from her teammates is something that will go on long way when the postseason comes around. The Cornell Invitational Tournament showed Wood what Coach Joanne Persico’s team was made of.

The volleyball team opens up conference play on September 22nd at DePaul, one of the schools that heavily recruited Wood.