With the announcement of their conference contests, the Red Storm now have their full schedule lined up 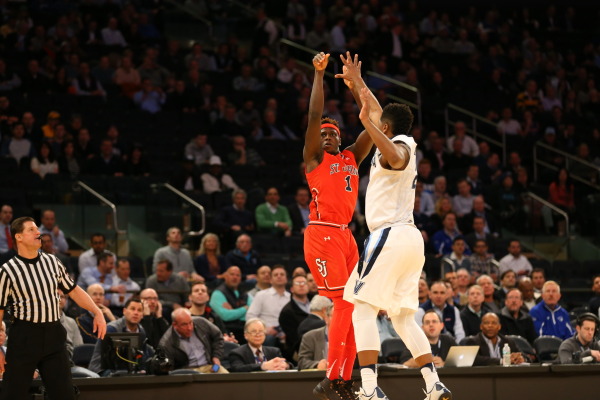 A Red Storm schedule release is a basketball fan’s version of Christmas and New Year’s Day wrapped into one.

The campaign kicks off on November 10th with a home against the University of New Orleans. The Big East portion of the schedule then opens up on December 28th with Providence paying Carnesecca Arena a visit.

The Red Storm will take over Madison Square Garden five times this regular season, including January matchups with Georgetown and Villanova, plus a February 3rd bout with Duke.

With the Big Dance in reach, Mullin will need to lead his men through some trying early-season non-conference foes, plus the perennial difficulties that the Big East schedule brings about.

It goes without saying that wins over top-notch challengers like Duke and ‘Nova would look terrific on the Red Storm tournament résumé. Quality adversaries are scattered throughout the St. John’s schedule, however, and it is performance in those matchups that will either solidify a team’s postseason hopes or pop its tournament bubble.

Here are some matchups that could make-or-break the 2017-18 Johnnies’ NCAA Tournament chances…
11/16 vs. NEBRASKA
The first power-conference opponent on the schedule, the Cornhuskers could prove to be an early trap game. Coach Tim Miles’ crew saw its fair share of struggles in the 2016-17 season (12-19 overall, 6-12 in Big 10 play), but the addition of transfer guard James Palmer (Miami) and forward Isaac Copeland (Georgetown) has the ‘Huskers hopeful for a rebound this winter. St. John’s is certainly the better team on paper, but this squad from a tough Big 10 Conference could bring early trouble to Carnesecca Arena.
12/17 vs. IONA (at Madison Square Garden)
As 2-time defending MAAC Tournament champions, the Gaels (22-13 overall, 12-8 in MAAC play) have been selected for the NCAA Tournament in each of the past two seasons. Although the Metro-Atlantic Athletic Conference has not customarily housed basketball powerhouses, Iona is most definitely a formidable foe for the Red Storm. They did lose leading scorer and Jamaica, Queens-native Jordan Washington to graduation, but a win in this mid-December matchup could go a long way in helping get the Johnnies some mid-March action.
2/24-3/3 vs. SETON HALL, BUTLER, PROVIDENCE
Any Big East game is a big game, but this three-game stretch to end the regular season could prove crucial. All three of these squads qualified for the NCAA Tournament in 2016-17, and all three will be competing for the Big East Conference title this season. Victories in just two of these contests could catapult the Red Storm to a tournament bid.