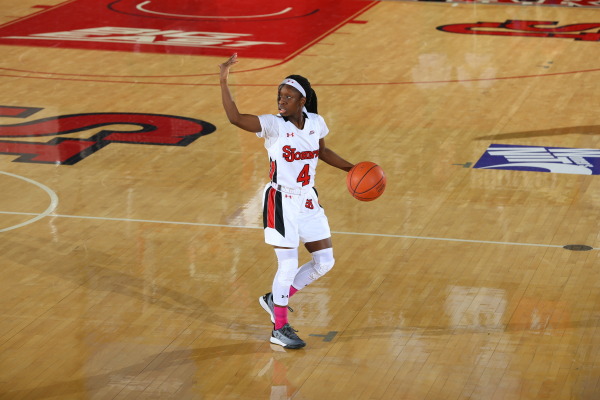 How far would you go to chase your dream? Would you endure a transatlantic flight, brave the unrelenting Scandinavian winters, and move to a city that few can locate on a globe just to pursue what you love?

Some, including former St. John’s basketball player Aaliyah Lewis, will do whatever it takes.

Lewis, who graduated last May after a stellar career in red and white, signed a deal with Forssan Alku of the top women’s league in Finland on Sept. 14. The terms of the contract have not been disclosed.

Lewis wasted no time accepting the offer to play in Finland when her agent received word. “I was dying to get back on the court and play,” she said.

ICYMI: Aaliyah Lewis signed a pro deal with a team in Finland. Check out some highlights from the 2016-17 season #SJUWBB pic.twitter.com/zBqMU8dp1b

A Staten Island, N.Y., native, Lewis has spent her whole life thriving in New York City’s five boroughs. She was a standout at the now-closed Bishop Ford Central Catholic High School in Brooklyn and played four years for the Red Storm in Queens, helping the program win its first Big East title in 27 years during her junior season.

As a senior, Lewis averaged over 37 minutes per game and finished third on the team in scoring, checking in at 11.1 points per contest. She also led the conference in total assists and steals and earned Big East Co-Defensive Player of the Year Award at the conclusion of her career.

Now, she’ll bring her signature energy and hustle across the pond, where she hopes to make an immediate impact on her new teammates.

“I want to make the team better, starting with them trusting me at the point guard position,” Lewis said. “I want to take advantage of my strengths and become one of the top players in this league and end with being one of the top teams in the league.”

In fact, she’s already ingratiating herself with her brand new teammates. Lewis said that her teammates are helping her re-adjust to a more quiet life in Finland while also teaching her a new basketball system that she believes can be a formula for success.

“I like my team,” Lewis said. “They’re very helpful on and off the court. They make sure I’m good with everything. We could be a good team if we buy into the system and trust one another.”

She won’t have much time to get comfortable, though. Forssan Alku begin their season at the end of this week, so Lewis might have to take a crash course in Finnish culture, which is undoubtedly different from the hustle and bustle of the city that she’s called home for so long.

“It’s nothing compared to what I thought it was going to be,” Lewis said. “I’m in a small, quiet city and I like it because it’s the total opposite of home, so it’s something new. I’m adjusting slowly and I’m glad the people here speak some English.”

Lewis has traveled thousands of miles, and is adjusting to a completely new team and culture, to chase her dream of playing professional basketball. And this may only be the beginning.

“I want to make a name for myself and explore all around Europe,” she said. “Every team I played for we won a championship and I would love to get one at the professional level. I’m experiencing something new and very different. This is the beginning of something special.”