The St. John's softball team uses an abbreviated fall schedule to tune up for its spring season 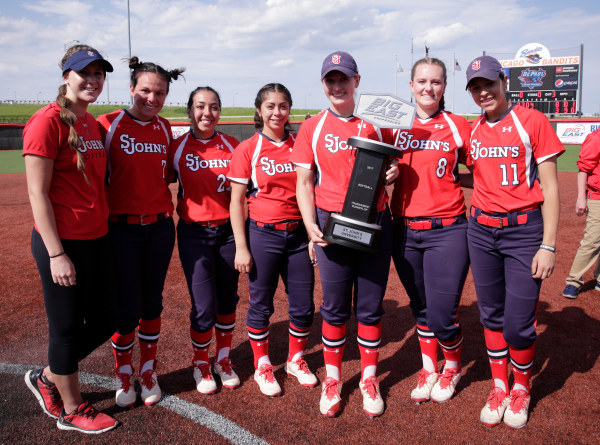 After a run to the conference finals last year, the Red Storm softball team uses their fall schedule to gear up for another long spring (Photo Courtesy/Athletic Communications).

Spring may still be six months away, but that hasn’t halted the action on Red Storm Field this fall. The St. John’s softball team began their fall season last Saturday at home, hosting Fairleigh Dickinson in what ended up being a blowout 11-1 win for the Johnnies to get the shortened autumn schedule going five months after their most recent game, a loss in the Big East championship contest.

Fall softball tilts may seem trivial or insignificant to the casual fan, but for the team, it’s an important time of the year to develop and grow in preparation for the traditional season. The Red Storm will play just a handful of games to try to be as prepared as possible before the winter freeze sets in.

“One of our key focus areas this fall will be centered around team chemistry and acclimating our large freshman class into the St. John’s softball program’s culture,” Head Coach Amy Kvilhaug said. “We have a young, but talented base that we are looking to do great things not only this year but in years to come. The improvements will come in the form of learning and experience.”

Kvilhaug stresses that integrating the five-player freshman class is vital for building momentum into the spring season, as all the members of the team will be able to adjust to one another, their playing styles, personalities, as well as strengths and weaknesses that will aid in the ironing out the lineup.

It’s especially difficult to make lineup decisions when this Red Storm team is looking particularly talented and versatile. In fact, Kvilhaug’s squad has won all four of its fall contests thus far, picking up doubleheader sweeps at Red Storm Field in two consecutive weekends. But every team can use improvements and along with being a tool for team cohesion, this fall season can also act as a “barometer for what we need to work on moving forward,” according to Kvilhaug.

The coaching staff is able to use the experience of the fall season, analyze their struggles and areas in need of improvement, and then use the winter to hone in on specific skills in practice, whether in the weight room or in indoor practice. Kvilhaug. also likes seeing the upperclassmen of the team taking the newcomers under their wings as a sort of mentorship that can begin in the fall during these games and grow over the winter.

As a whole the team is able to build their chemistry early in the year for an entire semester before the real season begins. Many students don’t even realize the preparation that is going on for the softball team around this time of year, but to grow to be a successful group in the spring when the games are more highly publicized, Red Storm Field hosts matches in the early fall on a regular basis.

The next home game for the Johnnies is October 7 vs. Queens College.