The Red Storm played an exhibition match against Zhejiang 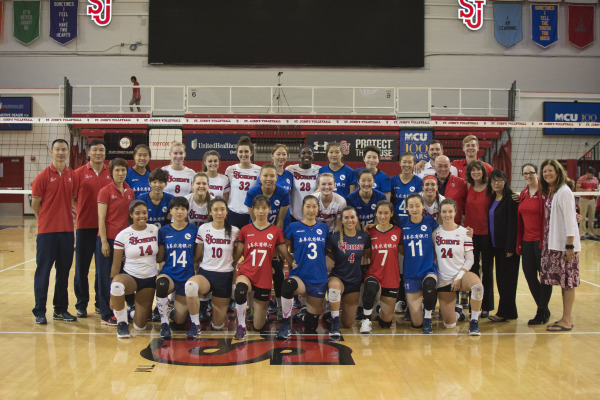 It was their first exhibition match against a Chinese professional team thus far this season.

“It was terrific for our players to understand that [Zhejiang] play a very quick game, they play a very disciplined game, and they play a very systematic game,” said Persico, who expressed her appreciation towards the Chinese professional team following the match.

In addition, Zhejiang finished as one of the top teams in the CVL with a perfect regular season record of 10-0, proving that they’re a team to beat in their league.

The exhibition match was an incredible opportunity for the St. John’s volleyball team to display their skills and leadership against some of the top volleyball players in the world.

They were being tested for their hard work, especially for a team as noble as Zhejiang. Although they lost 3-0 in their match against the Chinese professionals on Wednesday night, Coach Persico shined some optimism for her players.

“I thought we played a good match,” Persico said of her team’s performance. “I thought we were together, offensively we balanced the ball better…we had moments that we played really strong which would’ve catapulted us to a victory.”

Coach Persico also mentioned some factors her team needed to improve on and what she deemed essential for their path to more victories.

These factors include consistency and the ability to close out sets and close out matches.

She believes that the team needs to learn and understand what it means to enforce their will on an opponent throughout a match.

Two rookies, Jordan McCalla and Kayley Wood, were incorporated into the team’s offense, especially toward the last set of the match. They have potential to be the key pieces that the team needs for more victories, according to Persico.

“Obviously the score didn’t reflect the hard work they’ve been doing in the gym. But it was good for them to get some experience, because in the Big East, it’s difficult to make substitutions, so it was good that we put some players out there to see how they perform under pressure, especially the third set.”

The match does not count against the Red Storm’s record, so heading into the final two months of the season, the team still sits at 9-10 after a straight-set loss to No. 14 Creighton on Sept. 30.

After facing Villanova on Wednesday, the Johnnies will take a two-game road trip to take on Butler and Xavier this weekend.

At 1-3 in the conference, the Johnnies have some work to do before worrying about the Big East Tournament. This matchup helped highlight the work that needs to be done.