After a fast start in non-conference play, the Red Storm have work to do to catch up in the Big East 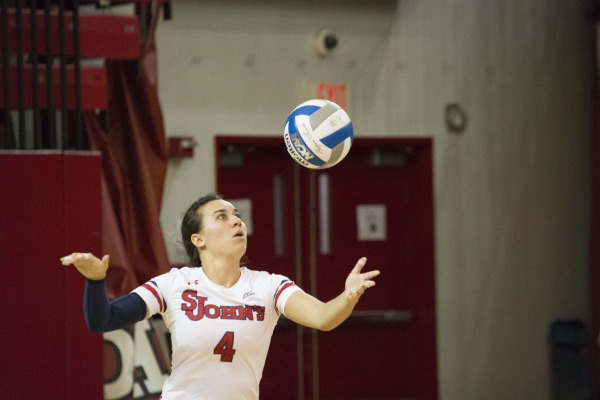 After starting the season 4-1, the St. John’s Volleyball team is at a crucial part of their season.

With a record of 9-11 and conference play now in full swing, the theme in those losses has been consistency.

“We just haven’t done enough to separate from teams,” Head Coach Joanne Persico said after the team’s exhibition loss to Chinese professional team Zhejiang. She said that the team has played some really good sets, but the team has also struggled in some, resulting in that lack of separation.

With the team currently in the midst of a pivotal conference homestand, Persico said that the team needs to play with a much more balanced offense. Now in her 24th season as head coach, the Queens native knows how unforgiving Big East play can be.

“We need to string good sets together and come out with a win,” Persico said.

Stringing those good sets together prevents games from going decisive fifth sets, something Coach Persico knows the team needs to avoid. In the team’s three matches that have went the full distance, the Red Storm are currently 0-3.

Their three-game home stretch included a three-set sweep against Providence last Friday and a disheartening loss to No. 14 Creighton, 3-0, the next day. It concluded with a loss to Villanova on Wednesday night.

Providence and Creighton both left Queens above .500 in conference play, while St. John’s fell to 1-3. The Friars took the nation by storm after starting the season 11-0, but they are only 2-4 in their last six matches and won their first two Big East tilts before losing to the Johnnies. Creighton is undefeated in conference play.

The Red Storm haven’t faced a ranked opponent in Queens since 2005.

The team also dropped a match to Villanova on Oct. 4. Danisha Moss recorded her 400th career block for the Johnnies, but the Wildcats pulled away late in the final two sets to seal the victory.

The team must rely on their ability to turn defense into offense to with players like Delaney D’Amore and Amanda Sanabia, who ranked near the top of the conference in digs.

Ross had a team-high eight kills in the second conference game against Marquette, while Wagner’s hitting percentages is .392, good for second in the conference.

In the middle of the conference schedule, St. John’s played that match against Zhejiang. Despite losing in straight sets, the team looked relaxed and gave the professionals a good fight despite a misleading scoreboard.

The first set ended with a score of 25-22, and the second set ended 25-19. It was not until the third set that Zhejiang was able to pull away.

Persico thinks that the fifth sets always favor the underdog. One thing she hopes to improve upon is finishing teams in the third and fourth sets, preventing the match from being decided by chance in the fifth set.

Despite the tough stretch for the team, Coach Persico is remaining optimistic.

“The senior leadership has been great in the past few weeks like it has the entire season,” she said. Senior leadership is always a vital part of a team’s success heading into conference and postseason play.