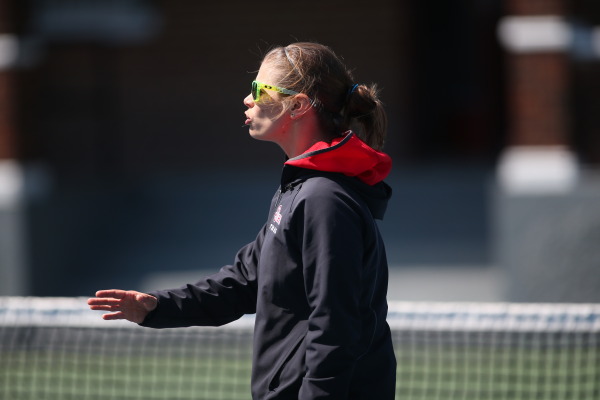 When St. John’s tennis Coach Lauren Leo arrives on campus, there is little time to rest. Upon checking in, her day begins with checking on the women’s strength and conditioning schedule, some paper work in the office and stringing rackets … all before going to practice.

“[I’m] just managing everything so everything runs as smooth as possible,” Coach Leo said. “So all the kids have to worry about is coming in and playing tennis.”

This year, there are a lot more athletes she’ll oversee. Coming into the season, Coach Leo was named the interim men’s tennis coach after longtime leader Eric Rebhuhn left the University last spring, all while she continues to be the active coach for the women’s  squad.

As if managing one successful Division I team wasn’t enough, Leo’s days just got a little longer. “Long hours,” she replied. “But they are rewarding hours.”

With so much to do in seemingly so little time, coaching two teams presents a brand new challenge for Leo. She believes that she is the right person for the job, showcasing already has a strong resume that includes a 14-5 record in her first season as a coach at St. John’s back in 2015. She credits the University with providing her help to make sure both teams get the attention they deserve.

“It is a juggling act, but it’s doable,” she said. “I have to prioritize and manage my time well.”

The men’s tennis team started the season with a perfect weekend at the Army West Point Shootout, a great way to start Coach Leo’s tenure with the team. However, Leo attributed the success to the group of guys that are already there, and assistants who oversee most of the on-court responsibilities.

“The group of guys that we have are hungry to get better and compete,” she said. “They have the right attitude, which is important.”

The women’s team has already had success as well, picking up right where they left off after a stellar 18-4 season last spring. Star sophomore Jessica Livianu reached the quarterfinals of the Oracle/ITA Masters last month, and the team picked up the Doubles B Flight title at the Cissie Leary Memorial Invitational on Sept. 24 in Philadelphia.

Leo is a St. John’s alum, playing for the women’s tennis team from 2003–07. She posted an impressive 48-29 record in both singles and doubles play during her playing career before getting into coaching. Leo knows what it’s like to have success on the tennis court, and tries to get the same from her players. She said it all starts with working hard in practice.

“I like to keep it simple,” she said. “Success doesn’t just happen, you have to work towards it. You have to put in the work in order to be successful.”

The men’s tennis team picked up 14 singles wins over the three-day Farnsworth Invitational from Oct. 6–8, while the women’s tennis team doesn’t travel to Philadelphia for the ITA Regional Championships until Oct. 18.

As the season goes on, Leo looks forward to how the two teams progress, but most importantly, how they fare in big east play.

“The men had success over the years in the Big East conference, and the women were gaining success each year,” she said. “So I’m kind of curious to see if we’re putting in the work now, and we continue to put in the work, where we’re going to end up at the end of the year.”