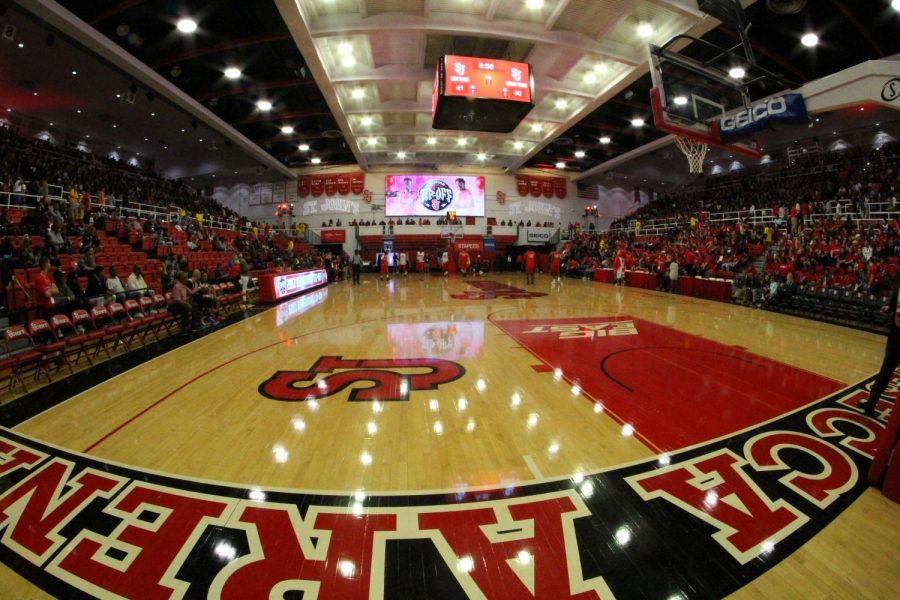 Heading into the season with plenty of hype surrounding St. John’s basketball, fans got their first glimpses of what to expect from the men’s and women’s hoops teams Friday night at Carnesecca Arena, when the University held its 10th annual Tip-Off Event.

The evening opened with the program’s first Alumni Game, with former Johnnies such as Anthony Mason Jr., and Boo Harvey playing to warm receptions from the crowd. Then, fans were introduced to all players from this year’s men’s and women’s teams that will be representing them on the hardwood this winter.

“This is the best event of the year,” senior forward Amar Alibegovic told RedStormSports.com after the event. Women’s guard Tamesha Alexander echoed that sentiment, saying that it means a lot knowing how much the fans support the teams.

Check out our full coverage from tonight’s #RedStormTipOff festivities:

Redshirt sophomore guard Marcus LoVett’s introduction stole the show. LoVett entered from the crowd dressed as a king, complete with a robe, crown, and a scepter. LoVett, along with sophomore and Brooklyn native Shamorie Ponds, emerged as one of the nation’s best young backcourts last season, finishing the campaign as the second-highest scoring freshman duo in the country.

Following all the introductions and performances by the St. John’s Dance Team and Cheer Squad, the men’s team played a lighthearted intrasquad scrimmage, which revealed a lot about some of the newcomers and how the team will operate this season.

The first thing is that Justin Simon is freakishly athletic. Although there was  little defensive competition, Simon glided up and down the court, showing off his bounce and throwing down some very impressive alley-oops and put-back dunks.

Freshman Bryan Trimble and returning starter Bashir Ahmed both looked very smooth from behind the arc. Ahmed was very streaky last year, shooting around 35 percent from deep, but he appears to have removed the hitch from his jumper and produced consistently positive results. Trimble, a player who has gone under the radar this preseason also looks to be very comfortable and could be a key secondary option for St. John’s.

In addition to all of this, a star was born Friday night: “Hoodie Ponds”. After playing pickup basketball in Manhattan during the summer with NBA star, and former New York Knicks forward, Carmelo Anthony, Ponds took notes on his fellow Brooklyn native, wearing a hooded undershirt akin to what the 10-time All-Star wore in many of his offseason workouts. Twitter exploded when Anthony wore a hoodie during workouts and looked unstoppable, spawning an alter ego, “Hoodie Melo.”

When Ponds donned the hoodie during the scrimmage, he pulled up from the St. John’s logo at Carnesecca Arena, well beyond the 3-point line, and drained it without hesitation.

After Desiigner’s raucous performance at Tip-Off last year, when he told students to rush the court against Public Safety’s will, East’s performance proved to be relatively calm. However, in the middle of his 25-minute performance, East urged students and fans to join him in a moment of protest against President Donald Trump. He asked students to hold an obscene gesture in the air, a request to which many obliged.

East, born David Brewster Jr., played a mixture of songs off his new album, “Paranoia: A True Story,” and some of his older albums like “Kairi Chanel”. A native of Harlem, East’s performance resonated well with the hometown crowd.

The two Red Storm basketball teams open up their seasons on the same night at Carnesecca Arena. On Friday, November 10th, the women start their campaign at 4:30 P.M. against St. Francis of Brooklyn, while the men tip off at 7:00 P.M, against New Orleans.