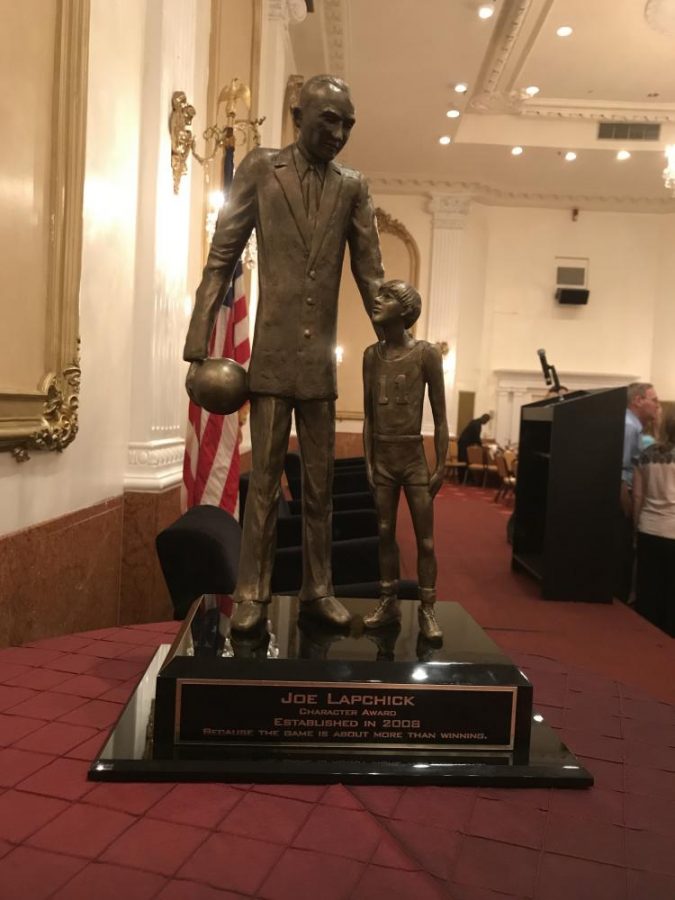 The Lapchick Character Awards were created over 10 years ago to honor courage and integrity in basketball. Now, the University plans to honor the Hall-of-Fame coach with a statue outside Carnesecca Arena (Torch Photo/Derrell Bouknight).

St. John’s University will honor its rich history yet again, as the university will unveil a statue of Hall-of-Fame coach, mentor and pioneer Joe Lapchick later this year.

The statue will be unveiled in a ceremony on Dec. 2, according to St. John’s alumnus Kevin Reed, who has spearheaded the project over the last several years. It will be placed in the courtyard between Taffner Hall and Carnesecca Arena.

Fundraising efforts were not completed in time to stay with the original schedule, though, and plans were pushed back until now. On Oct. 6, Alfieri announced the new launch date and lauded Reed for his persistence at the Lapchick Character Awards Luncheon in Manhattan. The Lapchick Character Awards honor legends in the basketball world who exemplify the integrity and commitment to excellence that were staples of Lapchick’s character.

“A lot of people worked very hard to make [the statue] a reality,” Alfieri said as he addressed the crowd of 250 people at the luncheon. “The unveiling of this statue is something that a lot of us have waited quite a while for. Kevin [Reed] worked very hard to raise a lot of money.”

Before his coaching days, the 6-foot-5 Lapchick was widely regarded as the greatest center of his generation, playing for the Original Celtics and the Cleveland Rosenblums in the 1920s. He won four American Basketball League championships in that span.

On top of a stellar playing and coaching career, Lapchick was known for his courage and inspirational leadership. He signed Nat “Sweetwater” Clifton, who became the second African-American player in NBA history, to harsh criticism around the country, and also displayed honesty and humility on the sidelines.

“By all accounts, Joe Lapchick was a Hall-of-Fame coach and a Hall-of-Fame person,” Reed told the University in 2013. “I began to wonder: ‘Why are there no prominent monuments on the Queens campus honoring Lapchick’s legacy?’ And that’s precisely how this statue idea got off the ground.”

The University did not immediately respond to a request for comment on the statue.