Catching up on the last week in Red Storm sports 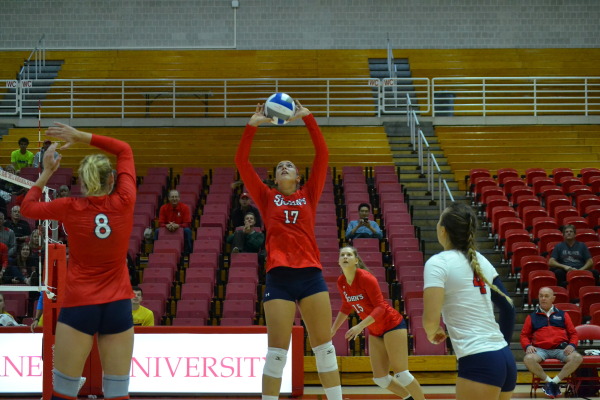 The Red Storm’s men’s golf team finished in an 11th-place tie in the Connecticut Cup. The two-day event took place October 9 and 10.

Junior Andrew Baek shot a combined score of 74 in the first and second round. He finished with a score of 75 in the final round, which featured consecutive birdies on par four and five.

Sophomore Gerald Mackedon posted a 71 (team-low) on day two and finished with an overall score of 224. The sophomore was one of three out of 90 golfers to make an eagle in the final round, which he did on the par-five 13th hole.

Junior Matthew Sweeney tallied a 76 followed by an 81.

The duo of sophomore James Smoot and Ross Moore had an overall combined final day score of 154 and 155.

Jonathan Spicci had an overall score of 158 in individual competition.

The Red Storm concluded play with a team score of 900 (+36). The host team, the University of Connecticut, finished first out of 15 teams.

Sanchez had four birdies on the second, while sophomore Kaitleen Shee was one-over 72 entering day two. Junior Lydia Kim managed a 77 (+6) on day one, and sophomore Sofie Huseby was one eight-over 79.

The second and final day of the Brown Bear Invitational ended with the Red Storm finishing in second place overall.

For the Johnnies, Kim had a score of 78, with both Sanchez and Huesby posting 83.

“I was very pleased with our play this weekend,” Head Coach Ambry Bishop said. “Even though we had a break in our schedule, we worked really hard and continued creating competitive environments during practice over the last few weeks to help make us even stronger at the Brown event.”

The duo of Hanna Wagner and Jordan McCalla combined for 12 kills and four blocks.

Hanna Wagner had nine kills and a hitting percentage .571 to go along with two blocks. Danisha Moss tallied six kills and two blocks.

St. John’s next match is against Creighton on October 20, followed by Providence two days later. They have nine matches left until the Big East Tournament, which begins Nov. 24 in Milwaukee.