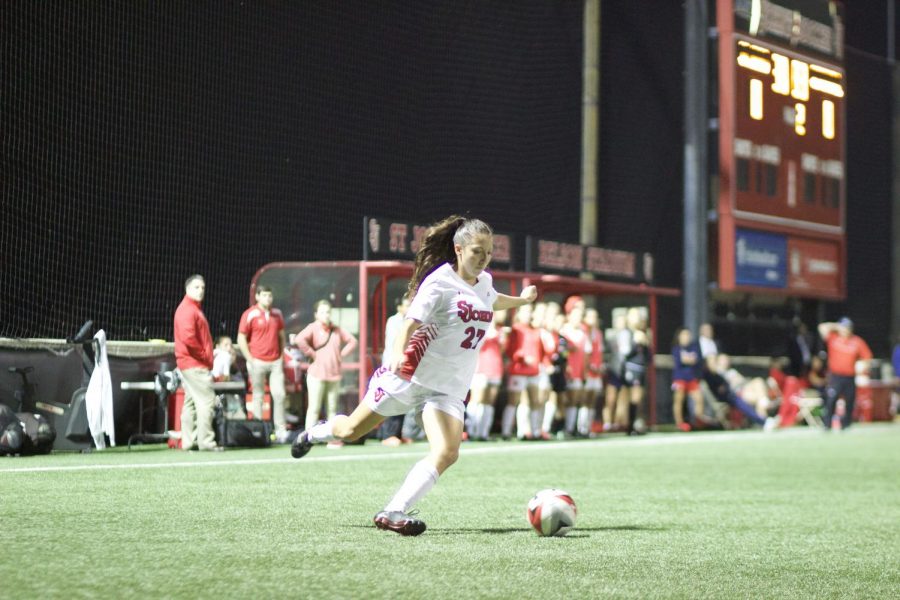 Senior Allie Moar, shown here against Seton Hall on Oct. 14, was one of six seniors honored during the team's 1-0 victory against Xavier on Oct. 22 (Torch Photo/Nick Bello).

The St. John’s women’s soccer team snagged a 1-0 double overtime win on Saturday over Xavier. The match was the final home game of the season for the team, marking Senior Day for the graduating players. The six seniors on the squad (Sarah Chaides, Mikhaila Martinov, Shea Connors, Jesse Schaefer, Mariela Jacome and Allie Moar) all played their final game at Belson Stadium in what turned out to be an exciting victory for the Red Storm.

The game was actually decided on an own goal coming from a Xavier defender who attempted to clear the ball wide of the goal but missed and shot it right on the inside of the post, past her own goalkeeper and into the back of the net.

40' | Jordan Kamp makes a huge save to keep this game scoreless pic.twitter.com/roOzDBLIDC

The Johnnies went for eight shots on goal, four of which were from Christina Bellero, and 12 shots total, six of which from Bellero. Jordan Kamp made six saves and grabbed her seventh win and fourth clean sheet of the season.

The back-line defense of Moar, Schaefer, Martinov, Christine McBeath, and Mecara Bruce played the whole game, including both overtime periods, and held the Xavier offense back tightly.

“Xavier is a very good team,” Head Coach Ian Stone said after the game. “It’s no coincidence they have the record they have so far this season. I thought, in the first half, they took it to us a little so we had to change some things up at halftime. Then it was just a matter of fighting, digging deep on our home field on Senior Day to get the result.

“We had some pretty good chances and didn’t capitalize on them but we just kept pushing forward and believing and eventually found a way,” he continued.

The team has rebounded nicely after a four-game losing streak early in September, posting a 4-3 record since Sept. 28. They’ve won three matches in a row to move into a tie with Marquette for fifth place in the conference with 12 points.

Nationally-ranked Georgetown leads the conference with a 5-1-2 conference record and 17 points.

This game comes after last week’s announcement  that Schaefer was named Defensive Player of the Week in the Big East, the first such honor of her career.

Schaefer anchored the Johnnies’ defense in what was, at the time of the announcement, four shutouts for the season. That is now five after Saturday’s win over Xavier.

Bellero, a junior, and Jordan Kamp, a redshirt freshman, were also named to the Big East Weekly Honor Roll last week. Bellero ranked third in the conference in goals scored with six and fourth in points with 15 at the time of the announcement.

Kamp was in the  top 10 in the conference in goals against average, save percentage and saves at the same juncture.

St. John’s will take on DePaul in Chicago on Thursday to end its regular season, then will play in Big East Tournament on Oct. 29.