St. John's holds on to make the Big East Tournament for the first time since 2012 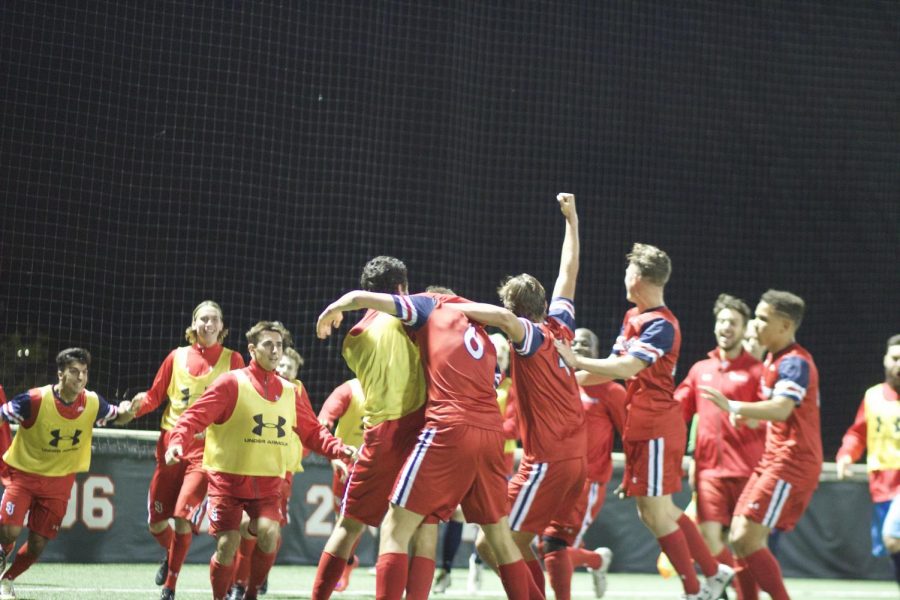 David Enstrom (6) celebrates with the team after scoring the decisive goal in the Red Storm's 1-0 win over No. 10 Georgetown on Oct. 28 (Torch Photo/Nick Bello).

When teammate Harry Cooksley lined up to take a free kick in the 31st minute against Georgetown on Saturday night, he envisioned the end result before the ball was even put in play.

“Harry has great set pieces, and [Johnston] is great with his head on the ball, and I just thought that he’s going to win the ball and I’m going to be on the far post and head it in,” Enstrom said.

Enstrom timed his break perfectly, meeting the ball at the far post just after Alistair Johnston flicked Cooksley’s feed back toward the scrum in front of the Georgetown net. With a single whip of his head, he gave St. John’s a 1-0 lead that they would not relinquish, giving St. John’s one of the more iconic victories in the storied history of the men’s soccer program on Senior Night.

In beating the 10th-ranked Hoyas, the Red Storm captured their biggest upset in four years, clinched a spot in the Big East Tournament for the first time since 2012, and gave Head Coach Dr. Dave Masur his 400th career victory.

And it was fitting that Enstrom led the way as the team honored its eight graduating players before the game. The senior found his way to Queens this summer after his former school, Buffalo, unexpectedly cut their men’s soccer program as one of four teams to be slashed after the spring semester.

Not only that, but the strike was Enstrom’s first in red and white, coming in the last regular-season home game of his collegiate career. The storylines seem almost too good to be true.

“We’ve had a lot of close games over the last couple of years,” Masur said after the game. “Georgetown’s a big team. Everybody was really ready with a lot of energy before the game, and a lot of people rallied around the seniors.”

It was too good to be true for the Red Storm in the first half, as they controlled the game while making Georgetown unusually uncomfortable in its offensive third. The Hoyas came into the game banged up, missing multiple key players that have helped them earn that No. 10 ranking, including sophomore Dylan Nealis, a stabilizing presence in the middle of the field.

The Johnnies took advantage of that early on, using Cooksley to push possession down the middle of the field. He took the team’s first two shots of the game, missing high and wide on two lasers from beyond the box.

The Hoyas couldn’t get comfortable in the attacking third of the pitch for most of the first 45, coming up empty from the middle of the pitch on several occasions. Their attempts from the wings were well-taken, though, getting close to finding glory on a couple of crosses.

In the 25th minute, a Christopher Lema corner kick nearly put the Hoyas ahead when it led to not one, but two solid Hoyas chances. The Red Storm broke the tension of a messy situation when the ball ping-ponged around the box, finding Jacob Montes and Declan McCabe, whose shots were both blocked just seconds apart.

On the other end, some six minutes later, Lema’s takedown of Cooksley as the Red Storm were charging ahead set up a set piece angled some 30 yards outside the box. The ensuing free kick led to the only goal of the game from either side, setting up a 60-minute defensive battle for St. John’s.

The second half was exactly that, with the Red Storm desperately trying to not to crack even after spending most of their energy taking control in the first half. By the 65-minute mark, the Johnnies had unintentionally employed the “bend, don’t break” defensive philosophy, relying on one of the nation’s best back lines to haphazardly stop Georgetown’s advances at the last second.

That back line suffered a big blow just minutes after halftime, when senior defender Jordan Shankle went down with an injury. Thomas Mickoski, who started all 16 games last year but found himself in a reserve role for most of this season, was inspiring as Shankle’s replacement, reinvigorating the St. John’s defense on the wings with fresh legs and an obvious hunger for victory.

“After the first half, we probably had better opportunities than they did,” Masur said. “We gave a little bit away in the second half.”

Masur earns his 400th win. #SJUMSOC gets to the Big East Tournament. Kids get autographs. What a night. pic.twitter.com/b1ANKhTkNX

Georgetown thoroughly dominated the second half, taking the game’s final six shots and coming just about as close as possible to drawing level in the 77th minute. Following a yellow card on Wilhelm Nilsson, McCabe rifled a curling free kick on net that hit the woodwork, right where the post meets the crossbar.

Had it gone through, it would have been one of the most spectacular goals of the season in the Big East, deflating the Red Storm’s chances at an upset and sucking the rest of the life out of an already-gassed squad. It didn’t and the Johnnies marched on.

All told, St. John’s blocked five of Georgetown’s nine shots in the second half, simply being battered with a hailstorm of chances on possession after possession and looking more and more like the struggling team that they had been over the prior three seasons.

Yet somehow, almost inexplicably, they survived. That team that won a total of five conference games from 2014–16 and lost four of their last five matches before Oct. 21 is heading back to the postseason with a coach that became the 19th in Division I history to hit the 400-win mark.

The win was the team’s first against a top-10 squad since defeating the Hoyas 1-0 in 2013 when they were ranked fifth in the country.

“You don’t have much time to really think about it,” Masur said of his 400th win.  “I think my job is to coach the team to win every game.  So that’s my focus and that’s what I want to do every time I coach.  I’m happy it happened on a day like today against Georgetown in such an important game and I’m glad the team really came through.”

After the game, when asked to describe the night considering all he’s endured and the struggles the program has had in recent times, Enstrom was at a loss. He paused, smiled and uttered a single word: “Amazing.”