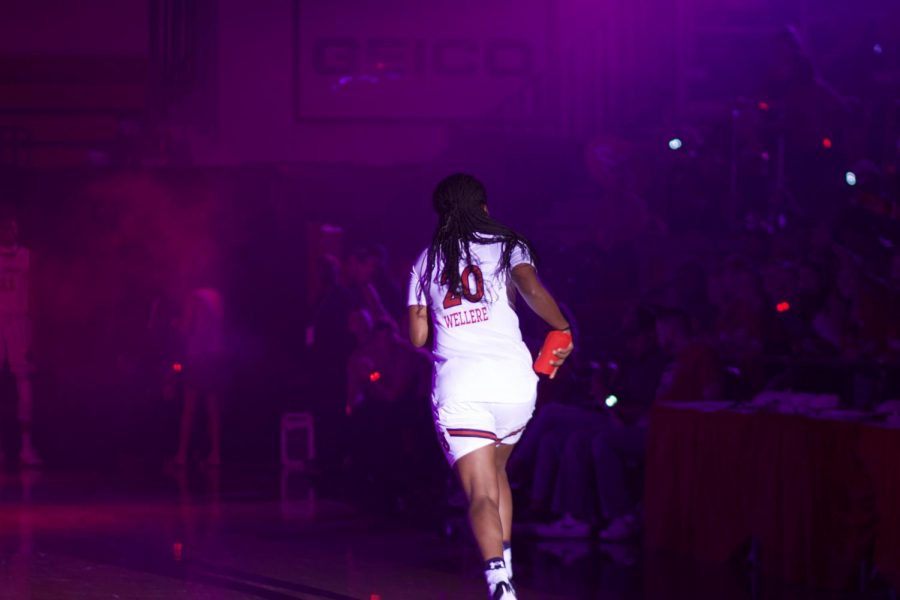 The Red Storm will rely on its contingent of returnees, such as Akina Wellere, to lead them back to the postseason (Torch photo/Nick Bello).

With four seasons of more than 20 victories and five postseason appearances under his belt, St. John’s women’s basketball coach Joe Tartamella has a keen eye for quality talent. So when he excitedly spoke of his roster for the upcoming Red Storm basketball season, it justified the buzz around the historically consistent team.

“Players see the opportunity we present within our league, at our university and in the way that we play,” he said. “What these young ladies have seen is that they wanted to be a part of what we were doing. And not just be a part to rebuild, but a part to reload.”

The Johnnies return eight players from last year’s 22-win team that reached the round of 16 in the National Invitational Tournament, one of the premier postseason contests in college basketball.

Of the six letterwinners that St. John’s lost, only two were starters: last year’s Big East Co-Defensive Player of the Year Aaliyah Lewis and a former All-Conference First Team honoree Jade Walker, both of whom have signed professional contracts.

Replacing that dynamic duo is no small task, but Tartamella is no stranger to retooling the Red Storm roster.

He relied on Lewis and Walker to be on-court leaders after two of the program’s best players, Aliyyah Handford and Danaejah Grant, graduated.

Handford is the only woman in St. John’s history to cross the 2,000-point mark in a career and Grant won the 2015–16 conference scoring title at nearly 20 points per game.

“We’ve just had really good players and great staff,” Tartamella said. “We’ve been able to show a track record of being able to [send players to the pros, including four WNBA Draft picks since 2013].”

Now, he’ll look to stalwart returning players, such as senior Imani Littleton, whose season ended prematurely last season thanks to knee and shoulder injuries, sophomore Andrayah Adams and junior Akina Wellere, who was second on the team in scoring with almost 12 points per contest.

“[Littleton] is just a really great kid,” Tartamella said. “She played hurt, probably many times. We’re glad to have her back, and she’s just really starting to come into her own. She’s gonna do a lot for us. She’s a quiet kid, but she’s a tough sucker.”

The Red Storm have an interesting crop of newcomers to go along with the plethora of returnees, including senior transfer Curteeona Brelove, but the 38-year-old coach said he’s been very impressed with his two freshman, 6-foot-3 forward Kayla Charles and Staten Island native Qadashah Hoppie.

“She’s just long as hell,” he said of Charles, a Far Rockaway native. “I’ve never had a kid who can protect the rim like she does, and she doesn’t even know how good she can be.”

Tartamella is so comfortable with the depth of his roster that he’s experimented with quite a few different lineups. And the Red Storm begin the quest toward their 16th postseason appearance, Tartamella’s ingenuity will be key.

“We’ve got a lot to rotate in, so I feel pretty good about the flexibility we have,” he said. “There’s some good stuff there to be able to stretch the floor, especially with our bigs, because then someone has to guard them.”