St. John’s Downs Creighton in Opening Round of Playoffs 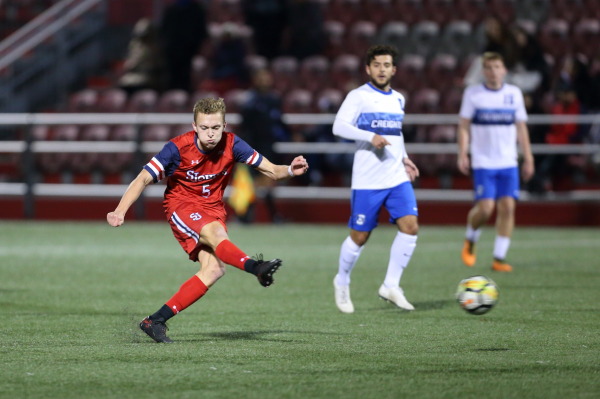 Alistair Johnston attempts one of his four shots on the night, two of which resulted in goals (Photo Courtesy/Athletic Communications).

It only took seven minutes for Alistair Johnston to feel the game shift in St. John’s favor.

It was solidified when Harry Cooksley dribbled towards the left side of the box and kicked the ball over to Matt Forster, who scored the Johnnies’ first goal three minutes earlier. Johnston ran down the middle of the field, threw his right hand in the air, and skied for a header on a pinpoint pass from Forster.

His goal put the Red Storm up 2-0, a critical one that gave the team momentum and led to a 3-1 win over Creighton in the first round of the Big East Men’s Soccer Tournament Saturday night at Belson Stadium.

“We knew that as soon as we get our goals in ahead, we feel comfortable,” Johnston said after the game. “We feel like we can win any game, especially when we get a lead. I just felt like once we got those two goals, we knew we were in the driver’s seat.”

St. John’s was aggressive from the opening kick, attacking the heart of the Bluejays’ defense and not allowing them a chance to match up. Forster’s goal came following a beautiful pass from Cooksley, the All-Big East First Team selection and Midfielder of the Year. He led Forster, whose kick sailed over the arms of Creighton goalkeeper Michael Kluver and into he back of the net.

As the pace of the game slowed, the Bluejays capitalized and took advantage. Big East Co-Offensive Player of the Year Ricky Lopez-Espin scored off a deflection 21 minutes into the half, cutting the St. John’s lead to 2-1. Creighton’s offense made up for the two early goals, establishing a rhythm and firing a barrage of shots, many landing wide right off the foot of Lopez-Espin.

Despite the goal and the pace favoring Creighton for several minutes, St. John’s Head Coach Dave Masur was still proud of the way his team fought without letting up.

“After they scored and we got reorganized at halftime, I thought we had a little more aggression and a better second half,” Masur said. “It culminated with a really good ball from Harry to Alistair for the third goal, which put the game away. We defended really well, we played hard, and everybody contributed, so I’m happy to see that.”

The second half of the game emulated the first, with both teams getting past the defense and in close on several shot attempts. Creighton had many opportunities to score, but the Red Storm’s defense escaped without surrendering another goal. Kluver’s three saves on the night all came in a 13-second span during the 69th minute. Several St. John’s players found themselves near the net but unable to get past Kluver and the scrappy defense trying to save their season.

Four minutes later, Cooksley’s free kick from outside the box led to Johnston’s second goal of the night. From there, Creighton was unable to establish any momentum, securing a St. John’s trip to D.C.

“He’s the most talented player in NCAA soccer,” Johnston said of Cooksley’s performance. “There’s just no one like him in the game.”

Saturday night was also a historic one for St. John’s. According to redstormsports.com, Cooksley became the first Red Storm player since Tadeu Terra in 2010 to record three assists in one game. It was also the team’s first win in a tournament game since capturing its ninth conference title in 2011, and their first time scoring three goals in a conference tournament game since defeating Rutgers 3-0 eight years ago.

Less than two weeks after defeating the then-No. 10 Hoyas 1-0 at home, St. John’s looks to carry momentum from Saturday’s contest into the semifinal round. Masur knows that in order to win, his team will have to execute on many levels.

“We made a couple of big blocks, a couple of big plays,” he said. “We’re going to have to continue to do that…Along with our intensity, our defensive organization, and our ability to connect balls forward.”

Kick-off for Wednesday’s game is 1 p.m. at Shaw Field.