Chris Mullin and Patrick Ewing will face off on the hardwood yet again, this time as young head coaches 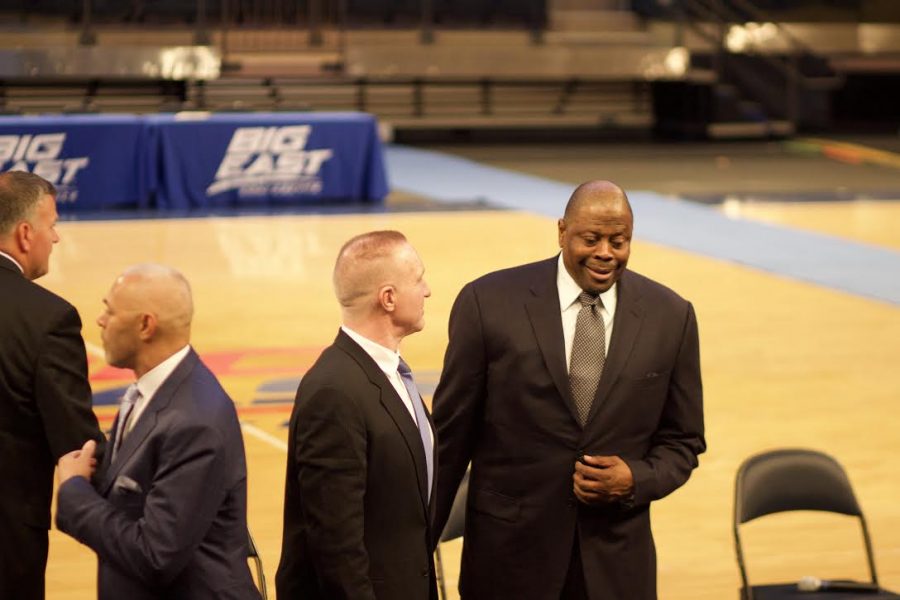 They were back to where the rivalry first started, the two friends who were introduced as enemies 36 years ago, separated by cameras and a few hop steps. In The World’s Most Famous Arena — the same arena where Ali lost to Frazier and Billy Joel can’t stop breaking his own records — the two laughed and joked and reminisced while mics and tape recorders hovered around their beaming faces.

What a sight it was at Madison Square Garden in mid-October: Chris Mullin and Patrick Ewing at Big East Media Day, speaking of the glory days of Big East basketball and the rivalries that once were.

For what seemed like an eternity, as shutters sounded and the scrums expanded, as smiles and slight jabs were exchanged, they discussed Georgetown and St. John’s and the renewal of a storied antagonism between two of the Big East’s premier programs. At times, the basketball legends acted like it was nothing, but in truth, the animosity never took a hiatus.

Just over seven months ago, a Madison Square Garden crowd felt the tension between the schools. The Hoyas and Red Storm faced off in the Big East Tournament, the players getting testy after a foul.

For about two minutes, it felt like 1985 all over again.

Then Mullin began to make his way to the media area. He strolled with calmness, his hands in his pockets, pulling his suit jacket back just enough to showcase the entirety of his royal blue necktie.

Jus a couple of old pals getting together. #SJUBB pic.twitter.com/znF5vOO9Hd

He stopped just underneath the basket, the one furthest from Ewing’s No. 33 hanging in the rafters. He took a barrage of questions, ranging from his star-studded backcourt and newcomers to whether he’s in favor of the one-and-done trend that dominates college basketball.

Then one came about Ewing, with whom he had posed for photos and hugged earlier in the day.

What’s it like to have him back in the Big East?

“I think it’s great for Georgetown,” Mullin said of Ewing’s hire. “They made a great choice. I think he’s going to get them back on top. The Big East will flourish from that, and I think college basketball in general. With a guy of Patrick’s stature, with the respect that he deserves and garnishes, it’s irreplaceable. It’ll be fun.”

The last time the two faced off on the court was March 2001, when Mullin’s Golden State Warriors played Ewing’s Seattle SuperSonics. Mullin only appeared in 20 games that year, last seeing action in February. Ewing started and scored 12 points, grabbing six rebounds with three blocks in 30 minutes of playing time.

But it was during the pinnacle of Big East and NBA hoops in the 80s and 90s when Mullin and Ewing first came to know one another.

“When we played [Georgetown], it was just different,” Mullin said. “Because it was, quite frankly, Patrick Ewing. That’s what it was all about. He was vicious, he was a competitor. People don’t understand that when Patrick was in college, he averaged 16 points per game. He could’ve averaged 40 if he wanted to.”

Despite the fierce competition, there was always respect and admiration between them. Their basketball careers have taken them to new heights, both saying that they never imagined being college coaches, especially at their alma maters. Ewing said it gave him goosebumps. Mullin called it surreal.

Then came the 1992 Olympics. Ewing and Mullin won two gold medals together, but their friendship both on and off the court peaked as members of the Dream Team. Mullin spoke of how games didn’t take place until 10:30 p.m. local time, giving players a full day of leisure. When they were allotted gym time, it was almost always Ewing and Mullin who went together, sometimes by themselves.

“We were going every day, just to kill time and get out of the hotel,” Mullin recalled.

Patrick Ewing talking about his relationship with Chris Mullin. pic.twitter.com/yKxpwqRpIp

36 years after the rivalry began, one’s career has been a near reflection of the other’s. Each were top-10 selections in the 1985 NBA Draft and were later inducted into the Naismith Basketball Hall of Fame. Mullin won three Big East Player of the Year Awards, while Ewing won two. They shared the honor in 1984 and 1985, the latter year being when Ewing’s Hoyas defeated St. John’s in the Final Four before winning the NCAA title.

Now, with both coaches tasked with bringing their respective teams back to prominence, expectations range across the board. St. John’s was picked to finish sixth in the Preseason Coaches’ Poll, and Georgetown ninth, even with a talented roster.

Despite what record the teams conclude with, a consequential reminder of the Big East 80s will compete with one another on the sidelines at least twice this season, Jan. 9 and 20. This time as coaches.

Just as Ewing got up for television interviews, leaving the Garden floor and heading up the tunnel, Mullin was asked about whether he believes the rivalry between the two programs is coming back to life. Earlier, his new coaching counterpart didn’t hesitate to voice his thoughts. “There’s always going to be tension,” Ewing said sharply.

Mullin, standing tall in the house of the greatest Knick to ever play in the Garden, leaned back and smiled, hands still in his pockets. Twice a year, fans get to watch as he and Ewing battle.

They’ll always remain friends, they’ve come too far to terminate their friendship. They knew of each other in high school, played one another in college, went to the NBA together and dominated on their respective franchises for years. That won’t change, but perhaps for 80 minutes on game days this coming January, they’ll be enemies.

So, is the rivalry coming back? Will fans see a revival of the glory days? Only time will tell. Both coaches are in unique stages, with Mullin having the best roster during his three-year tenure and Ewing settling into what he calls the “CEO” role of Georgetown basketball.

More than a decade after the conclusion of their playing careers, their admiration of each other hasn’t faded away, a sight to see when the 6-foot-7 Mullin and 7-foot Ewing come together to exchange hugs, just as they did moments before Big East Media Day began.

But Mullin’s response to the question was his last. It was candid, a short one that will evoke the memory of those who yearn for a reborn tug-of-war between towel-wearing Thompson and sweater-sporting Louie.

“Yeah,” Mullin said of a restored rivalry potentially brewing, Ewing’s silhouette still casting an elongated shadow in the tunnel to his right.