COURTSIDE: The Long Road Back

After a knee injury derailed her freshman season, Tiana England wants to prove herself all over again for St. John's 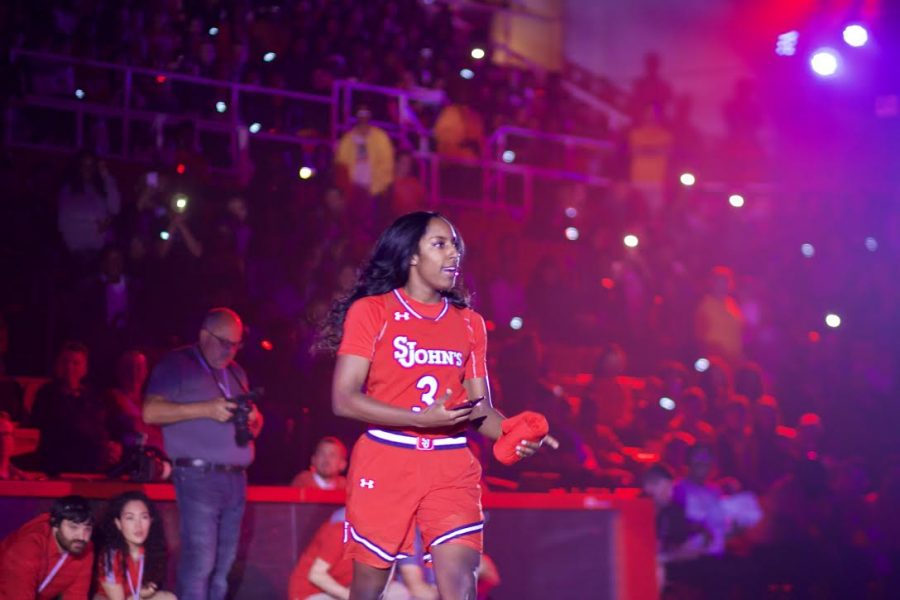 Last October, women’s basketball Head Coach Joe Tartamella delivered the sobering news that highly-touted freshman Tiana England would miss the season due to a devastating knee injury suffered in practice. She missed all of last season as her team finished with a record of 22-12 overall record and an 11-7 mark in the conference, finishing fourth in the Big East.

England, however, is back on the court for the Red Storm, and she’s looking to make up for lost time.

“I’m feeling really great,” England said. “Been working really hard to try and get back and the recovery went really well.”

2016–17 was another solid season for the Red Storm, but Tartamella said that England’s absence was felt as the team stormed to the NIT Sweet 16.

“Tiana has progressed extremely well off her injury,” Tartamella said. “She looks great, she looks back to where she was before the injury…[her] development will be a big part of how we play this year. Athletically, she’s as gifted as Aaliyah Lewis…and she shoots the ball better. We’re excited to get her on the floor.”

England was a two-time All-Fairfield County Interscholastic Athletic Conference and All-State selection for the Stamford Black Knights in high school. In addition, she averaged 18.9 points, 5.2 assists, and 4.1 steals per game, while surpassing the 1,000-point career scoring mark. England was known by her teammates as an upright and humble teammate, separating herself from the spotlight of the game in order to focus on winning for her team.

She said that the most difficult part of missing last season was watching her teammates battle every game from the sideline, confined to simply cheering them on instead of helping out on the court.

“At first it was pretty hard,” England said on her injury. “I was ready to go out there and play, but in reality, it was a blessing. To sit back and learn, and get stronger…watching Aaliyah Lewis last year, a great point guard, being able to get taught by her is great. She had a great career here at St. John’s.”

It is no wonder why Lewis was a strong role model for England. During her senior year, Lewis ranked third on the team with 11.1 points per game and led the Big East in assists with 6.2 per contest. She set a new program record for most career games played with 134 after seeing action in every game last season.

In addition, Lewis earned an All-Big East Honorable Mention  and was named the league’s Co-Defensive Player of the Year.

Lewis was an electric player to watch, with her speed and quickness inspiring the rest of the team. She displayed her through her efforts to compete hard every game, including her fearless attitude in attacking the basket as a 5-foot-5 point guard. England, standing at 5-foot-7, can help replace Lewis’ contributions.

If she learned one thing from her mentor last season, it’s that nothing should be able to stop her from winning and competing, no matter the severity of the obstacle.

Lewis was always tabbed as a scrappy guard that’s too small to play professionally, but she proved pundits wrong by signing a professional contract in Finland earlier in the fall. England, like Lewis, can rely on motivation from her teammates to complete her comeback and shine for St. John’s this winter.

“Being so successful in high school, it made me want to do the same at the higher level,” England said. “Playing here, it’s a blessing to get here, but now I have to keep working to get to the top. That’s what I love about this team. We stick together when we’re down.”