COURTSIDE: Back in the New York Groove 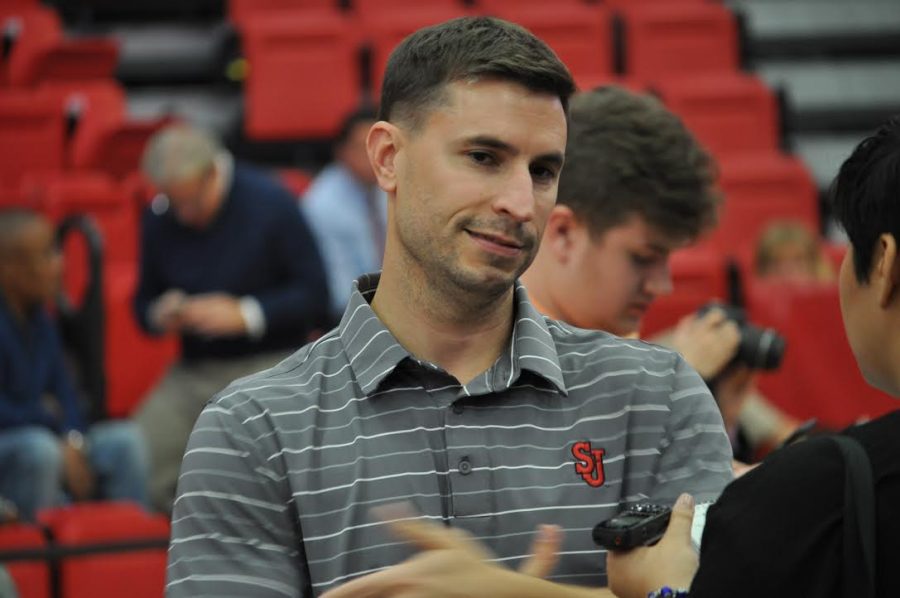 Rory Kuhn says that one of the main attractions of his new role as an assistant coach of the women’s basketball team is simple: St. John’s is synonymous with home.

“Being from New York, the allure of St. John’s is just something that’s huge…If you’re a New Yorker, you associate it with basketball,” Kuhn, who signed on in early September, said. “Being able to come back and work at St. John’s, in the basketball world, is pretty special.”

Kuhn is from Long Island, where he coached high school basketball for nine years before becoming an assistant coach for the Northwest Florida State College Raiders in 2013.

He said that his experience on Long Island formed the foundation of his career.

“That’s where I got my feet wet,” Kuhn said. “I started off coaching girls originally for three years then I switched over to coaching boys, did that for six years.”

Throughout Kuhn’s tenure as assistant coach for the Raiders, he helped guide the team to the 2014 National Championship and a 111-19 record.

Of his time with the Raiders, Kuhn said that it was an exciting transition to work with “high-level” players.

“There were adjustments to be made from coaching at a high school level, but I mean it was all for the better,” Kuhn said. “It was growth…Being exposed to different things, learning from different coaches, different philosophies, taking from that and incorporating it into your own coaching strategy — and obviously being effective in winning games down there helped a lot.”

For Kuhn, the similarities between coaching high school and college basketball still greatly outweighed the differences. “At the end of the day,” he added, “it’s basketball.”

Kuhn cites working under Head Coach Joe Tartamella — who he considers a mentor — among the benefits of his new position.

“[Tartamella’s] somebody I’ve known from my days here coaching in NY, so now to come back and reconnect with him and it’s all kind of like, full circle to be able to see him coach and learn from him,” Kuhn said. “I’ve already learned so much from seeing the way he handles everyday things…You can see why he’s successful by the way he approaches each day.”

“[Kuhn] has brought some really good things to us early in his start here,” Tartamella said in his opening statement at St. John’s Media Day on Oct. 26.

The Red Storm’s first game is on Nov. 10 against St. Francis Brooklyn and many players are already feeling Kuhn’s presence on the court.

According to redshirt freshman guard Tiana England, while the team has not yet played a game and therefore not fully experienced Kuhn’s approach, it is clear that he is making an effort to know the team.

“We haven’t seen much of his coaching style just yet, it’s pretty early,” Littleton said. “In practice, he’s definitely vocal, he’s always trying to pick us up and help us be where we need to be.”

Kuhn believes his experience and accomplishments in Florida, as well as the new energy he brings, will lend itself well to his new role.

“If you’re confident in yourself as a coach and you’ve had some success winning games, just bring it over,” Kuhn said. “Try to learn a little bit more under somebody new, grow a little bit and just continue to win games.”