COURTSIDE: Legend in the Making 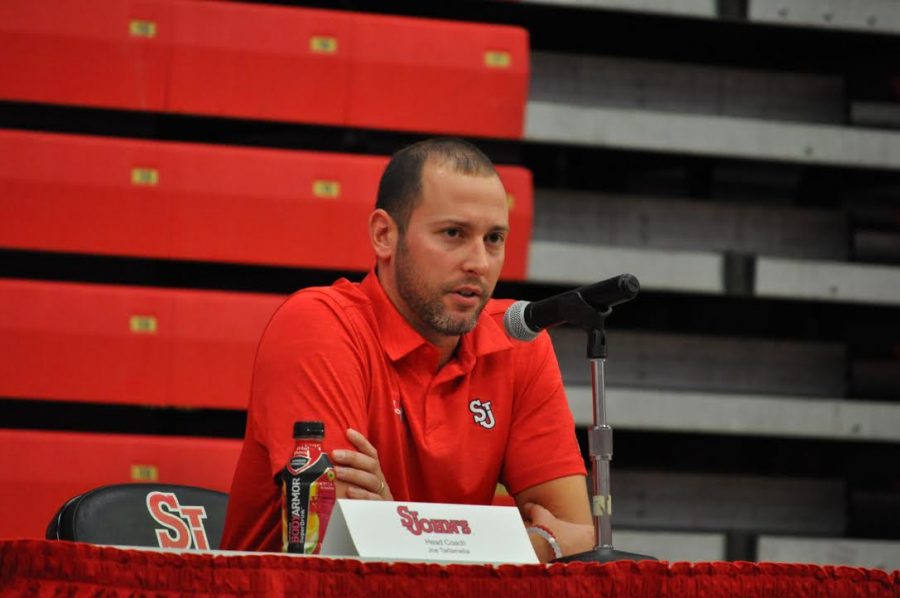 A coach’s success can be defined in a number of ways. One may start by looking at the banners hanging in the rafters, or in the case of Carnesecca Arena, on the walls.

Women’s basketball Head Coach Joe Tartamella has left his mark on those concrete stanchions. Five seasons have passed since he took the reigns as head coach of the St. John’s women’s program — a daunting position for the then-32 year-old career assistant.

The Johnnies were coming off five straight postseason bids under then- Head Coach Kim Barnes Arico. Expectations were sky-high for this dawning age of Red Storm dominance. Tartamella did not disappoint.

His first year saw its ups and downs. A slow start for the preseason 14th-ranked Red Storm, coupled with the loss of guard Eugeneia McPherson to injury, had the new lead man on the rocks.

But what truly defines a leader is his ability to climb up from the doldrums of defeat. The waters settled, and by the end of the 2012 season, the Johnnies were in the NCAA Tournament for a fourth straight year. They have not looked back since.

Four 20-win seasons, two more NCAA Tournament appearances, two WNIT bids and a Big East title later, Tartamella and his players are in the midst of a Red Storm renaissance.

And yet, Tartamella looks beyond the win-loss record as a mark of his accomplishments. He sees a much bigger picture in defining his program’s success.

“For us, it’s really trying to see how good we can be as a group,” Tartamella said about preparing for the coming campaign. “We define our success in a number of areas, it’s not just about getting to the postseason. Certainly that’s one of them. We really are looking for growth, from the end of our [previous] season till we finish [this year].”

Before taking the lead role in Queens, Tartamella was a member of the supporting cast as an assistant under Barnes Arico for ten seasons. His first year as a graduate assistant, 2002, saw the Red Storm accumulate eight wins. By the time he graduated to assistant coach in 2005, the Johnnies were in the NCAA Tournament Round of 32 with a 22-8 mark.

Tartamella knows how to best motivate his squad, putting them on the path to make the most of their time donning the red and white.

“Success for us, really, is wanting to make sure we get the best out of our team,” Tartamella said. “We don’t want underachievement; we want to be able to overachieve.”

He has helped turn players’ dreams into reality. Four former St. John’s players have gone from Tartamella’s program to hearing their names called at the WNBA Draft, most recently Aliyyah Handford and Danaejah Grant in 2016.  The genuine care for his players does not go unnoticed by the women he leads in battle each season. They know how much he knows, how much he motivates and how much he cares.

“He teaches us basketball — he teaches us life through basketball,” said junior forward Maya Singleton of Tartamella’s person-to-person coaching style. “Every day in practice he just demands the most out of us, and that’s what we try to give him in order to be great.”

Beyond his personal nature, his full-on understanding of the game has kept him at the forefront of the Big East coaching scene for the past five seasons.

“When we break down film, you get to see how much he really understands the game,” said senior guard Tamesha Alexander. “He’s great at breaking it down for you so that you’re able to understand.”

Fifteen full seasons around the women’s game will provide such an expertise. And yet, even with a wide range of experience, Tartamella constantly finds himself adapting in an ever-changing basketball landscape.

“In 15 years I’ve seen a lot, but I haven’t seen it all,” he remarked with a smile. “Certainly we’ve had our challenges.”

His evolution as a coach is apparent to his players as well. To some veteran eyes, he has developed a bit of a sweetness.

“He’s a softie now,” Alexander said with a chuckle. “He has a little baby girl…He doesn’t yell as much and he has a little more patience now.”

An overturning roster, an evolving game and an expanding size of the family car. Yet one thing has remained constant through the years: a victorious tradition.

“I’ve learned so much. I’ve changed a lot as a coach,” Tartamella said, always remaining humble.

And with an entire slate of games ahead, the basketball junkie is ready to absorb some more.