What can All-Big East guards Shamorie Ponds and Marcus LoVett do for an encore after a stellar freshman season? 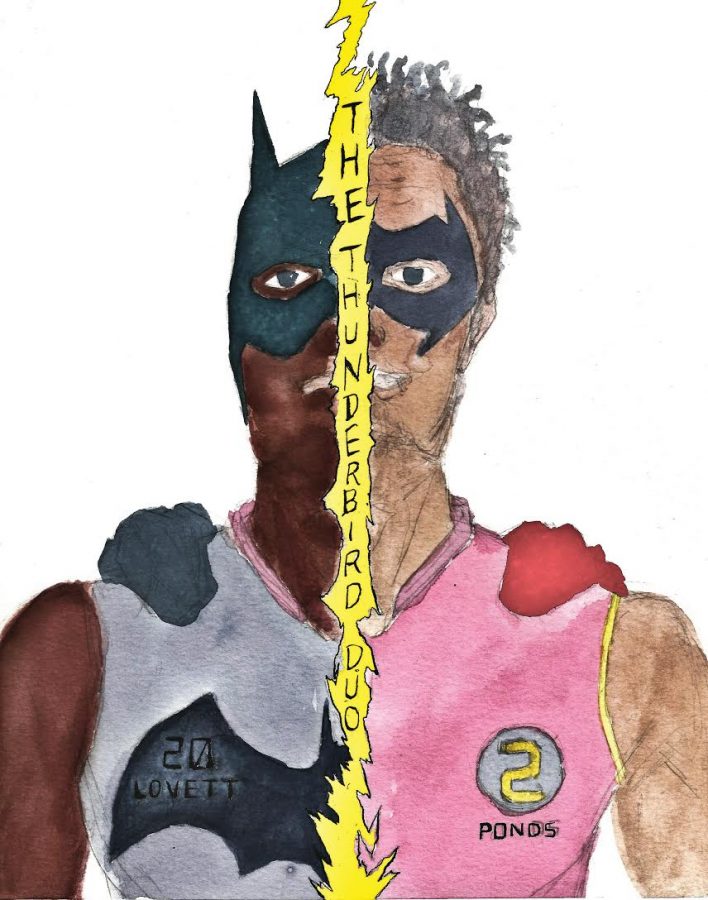 Abbott and Costello. Simon and Garfunkel. Heck, even Lucy and Ethel. History is littered with iconic pairs that set the world ablaze in one way or another.

St. John’s basketball is no exception, with heroic duos such as Joe Lapchick and Lou Carnesecca, Chris Mullin and Walter Berry and D’Angelo Harrison and Sir’Dominic Pointer gracing the floor in front of generations of Red Storm fans.

And now, a whole new twosome is dominating the floor in red and white, putting the college basketball landscape on notice. Shamorie Ponds and Marcus LoVett exploded on the scene last winter as dynamic scorers with quick hands, fast feet and room to grow.

They ended the regular season as the second-highest scoring pair of freshman in the country, just behind Kentucky stars Malik Monk and De’Aaron Fox, who were both taken in the top 15 of the most recent NBA Draft.

“It’s just the chemistry we have,” LoVett said at St. John’s Media Day on Oct. 26. “We just dug off of that [last year]. Stuff happens on the court for us because we’re always looking for each other.”

Together, they were simply phenomenal, crossing the 20-point mark 20 times and earning All-Big East Freshman Team honors in a season punctuated by a win over No. 13 Butler that featured the perfect combination of the duo’s electrifying attributes.

On that memorable night at Carnesecca, Ponds scored 26, including 11 in the final 11 minutes, and LoVett drained a game-tying stepback jumper with less than a minute to go in the 76-73 win.

They also led the full-court press that threw the Bulldogs off balance and led to, for now, the signature win of Mullin’s coaching career.

“He’s a really phenomenal player, but he also has that [calm and cool] personality,” Mullin said that night of Ponds. “That is his demeanor on and off the court. He doesn’t really show a whole lot of emotion, but yet he’s a fierce competitor.”

And although they teamed up at very different points in their basketball careers, they’ve become fast friends in addition to star teammates. Ponds is the kind of homegrown talent that the Red Storm have tried to court year after year with uneven success. He came out of Thomas Jefferson High School in Brooklyn as a top-40 high school player in the country.

LoVett, meanwhile, was ruled ineligible by the NCAA in his freshman season, confined to practicing with the team while they lost over 20 games in Mullin’s first year. Now, however, the duo is unstoppable and inseparable.

“We always talk to each other, eat together, stuff like that is important,” LoVett said. “We’re always texting each other. Stuff like that, that’s going to make our relationship and things on the court better for our team.”

Last year was a superb start to their collegiate careers, but Ponds and LoVett are striving for more.

With former four-star prospect Justin Simon added to the mix, the two should get plenty of different looks as Mullin will reportedly try to employ different lineups to feed his small, but mighty, monsters.

Mullin has said numerous times this offseason that Simon will relieve the partnership of ball-handling duties, allowing them to excel at the catch-and-shoot game that they developed with each other around the perimeter last season.

“[We’ve worked on] just leading our team to where we’re trying to get to,” LoVett said. “Just being facilitators, finding the open gaps and finding our teammates.”

Staying one step ahead of opposing defenses should get a little easier now that they’re both entering their second year on the court. And with just two seniors, Amar Alibegovic and Bashir Ahmed, on the roster, the sophomores are ready to lead, which is vital for Mullin and the squad if at least one of them will be on the court at all times.

“There’s no substitute for experience,” Mullin said. “[Ponds and LoVett] both had a lot of minutes on the floor. I’ve asked them this year to do a little bit more, like help us on the board and become catch-and-shoot players…So far in practice they’ve been great.”

Unfortunately, most great duos, at one point or another, meet their demise. Abbott and Costello hit hard times in the late 1950s. Simon went down by the schoolyard, while Garfunkel stayed 99 miles from L.A. Lucy and Ethel got the axe after six seasons.

Yes, it’s true that Ponds and LoVett won’t be around forever, especially when the pro ranks come calling in the near future. But they’re here at a program-defining moment in time, with the Red Storm ready to roll back into the spotlight, and they want to be the ones to take them there.

“We know we can play with anybody in the country on a given night, and we can get beat,” Mullin said. “That’s a good thing. You always have your guard up. That’s why you rehearse. That’s why you practice.”

And that’s why you need a duo like Shamorie Ponds and Marcus LoVett.