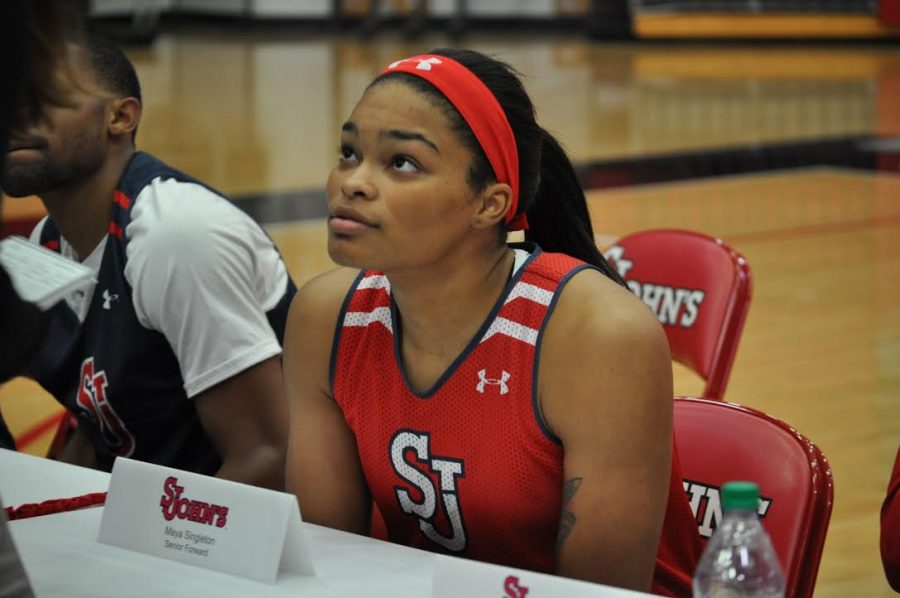 St. John’s Media Day on Oct. 26 provided a snapshot of what’s expected this season from the storied women’s basketball team. Following the departure of All-Big East First Team member Jade Walker, the Red Storm look to the return of senior forwards Imani Littleton and Maya Singleton to be major threats in the post this season.

After suffering an injury last season, Littleton returns for her fourth and final year playing for St. John’s. Last season, she averaged 5.1 points and 5.7 rebounds in 25.6 minutes per game.

Playing in nearly every game last season, Littleton’s favorite matchup was the Dec. 21 contest when they defeated James Madison.

“My favorite was definitely the kid’s day game,” Littleton said. “We played James Madison University and it’s always fun to have the gym filled with kids and they’re screaming and cheering for both teams. Great day. I just plan on continuing to work hard, continue to be a leader for my teammates and make sure that they can follow my example.”

Littleton was also asked about her main motivations that helped her prepare for this season.

“You know, it’s never fun being hurt, especially in the biggest part of season I guess,” she said. “Over [the] summer I just worked on getting back with the team. By like June-ish I was pretty much back with the team. But, my motivation was just this is my final season, so I just want to be ready, ready to leave my mark.”

When asked about how she and Singleton plan to maintain dominance in their position, Littleton said that they have trained hard and long for the upcoming season, improving and expanding their defensive abilities.

Singleton, a forward, proved her dominance and strength at the position last season. She finished the year averaging 5.8 points and 5.8 rebounds in 19.5 minutes per game. As one of St. John’s and the Big East’s most reputable rebounders, Singleton became the first Red Storm player since 2015 to record 20 rebounds in a single game during her first career start for SJU.

Singleton is eager to begin the season and aims to be more of an offensive threat for the Johnnies. “I’m honestly just excited for the season to start,” she said of her expectations for the season. “You know, it’s been a long journey for me to get to this point, so I’m just overall excited.”

“She is becoming a great leader on this team. We certainly look at her as someone who is going to play a big part. I know she is excited for our team and we are excited to have her here.”

As for her plan to command authority, Singleton revealed that staying aggressive on both ends of the floor is key. “When I see the ball come off the rim, it’s me versus you and it has to be mine,” she said. “That’s how I see it.”

Due to Walker’s departure, the two stand-out forwards have big shoes to fill. But with their hard work, dedication, athleticism and skill, they will be formidable to the team’s success this season.