COURTSIDE: Will They Kneel?

The hotly-debated form of protest has taken hold in some collegiate programs. Is St. John's next? 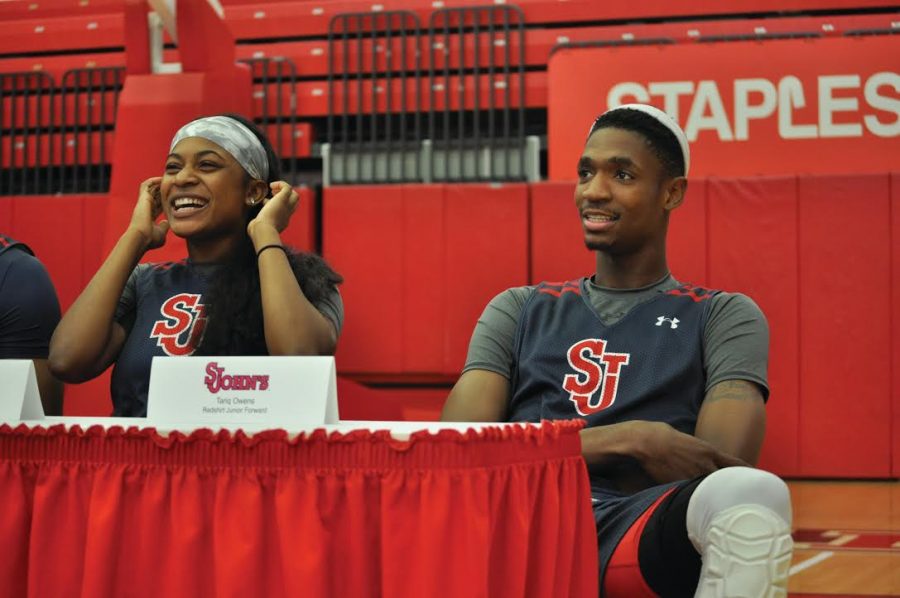 Perhaps one of the questions in the backs of spectators’ minds as the St. John’s basketball season quickly approaches is: Will the athletes kneel during the national anthem?

Ever since former San Francisco 49ers quarterback Colin Kaepernick began kneeling during the national anthem in 2016 as a form of protest, there have been many instances of players following in his footsteps, as well as some who have condemned it.

Due to the nature of the protest, it’s simple to understand why this subject continues to be one that is hotly debated — not only in the world of sports, but also more recently in politics.

During St John’s Media Day on Oct. 26, forward Tariq Owens said he could not speak on behalf of his team on the issue, stating that they have not come to an agreement just yet.

Michigan football players raise their fists up in protest during the National Anthem, before an NCAA college football game. #AnthemProtest pic.twitter.com/LikKDDklCV

“I know some guys feel like we should, and I know other guys are not opposed to it, but some just haven’t stepped up and said, ‘Yeah, I’m willing to do that,’” Owens said. “[At] the end of the day that’s a big thing to do, no matter what level you do it or who’s watching.”

However, he added that there is a possibility he would take his own stance on the matter.

“It’s the national anthem, something that gives our whole country pride, but the reasons for doing it I believe are right,” Owens said. “Personally, I would want to just because, like I said, I believe in the reasons why people are doing it and the true purpose behind it.”

Kaepernick explained his reasons for kneeling for the first time in an interview with NFL Media in August 2016 in which he said: “I am not going to stand up to show pride in a flag for a country that oppresses black people and people of color. To me, this is bigger than football and it would be selfish on my part to look the other way. There are bodies in the street and people getting paid leave and getting away with murder.”

Forward Imani Littleton similarly said that the women’s basketball team has not discussed the possibility of taking a stance; but that, “Obviously it’s a really important issue, but I don’t have a comment as to how we would go about it.”

As a result of President Donald Trump’s tweets calling for a boycott of the NFL on Sept. 23, more professional football players and teams began to kneel during the national anthem in the previous months.

Trump’s tweets that sparked the latest series of protests were in direct response to Golden State Warriors’ guard Stephen Curry declining an invitation to visit the White House as well as the Commissioner of the National Football League Roger Goodell’s statement justifying the NFL athlete’s First Amendment rights to protest.

“If a player wants the privilege of making millions of dollars in the NFL, or other leagues, he or she should not be allowed to disrespect our Great American Flag (or Country) and should stand for the National Anthem,” Trump tweeted. “If not, YOU’RE FIRED. Find something else to do!”

Earlier this fall St. John’s Director of Athletics Anton Goff issued a statement to the Torch in which he said student athletes are free to express their opinions on “social issues.”

“At St. John’s, we recognize that freedom of thought, expression, and speech are intellectual pillars of our University community and key parts of our Vincentian mission to serve those in need both locally and around the world,” Goff said. “In particular, we encourage our student-athletes to openly discuss their views on social issues after careful consideration of the impact they can have as leaders within the University community and in society as a whole.”

He added, “It is our obligation as an institution of higher learning to promote reflection and informed conversation when supporting causes, both publicly and privately.”

Forward Kassoum Yakwe said that the men’s team “probably will take a stance.”

On the other hand, other players were not as sure as Owens and Yakwe about the possibility of publicly taking a stance during the national anthem. Qadashah Hoppie, one of the guards on the women’s basketball team, reiterated that their team has yet to come to a decision on the matter.

“As of now we haven’t really talked about doing anything but we are aware of the situation,” Hoppie said. “But like my coaches say, if you’re gonna stand for something, you better know what you’re standing for and if you truly believe in it.”

Marcus LoVett echoed Hoppie’s comment, as he said, “At some point we will talk about it and discuss it, and see what we do as a team collectively.”

Among the men’s and women’s basketball team, this was the consensus at St. John’s Media Day.

Forward Amar Alibegovic said, “Everyone’s aware of what’s happening and everyone has their own opinions, I know we have a lot of different opinions, so we’ll keep it at that and we’ll see what we decide as a team.”

However, not all of the players seem to be interested in making a statement. Some of the players on the women’s basketball team believe they will not participate in this protest. Forward Maya Singleton said she does not intend to take a stance on this particular issue.

“Honestly I don’t watch NFL so I really don’t know what’s going on with that,” Singleton said. “I don’t pay too much attention to it.”

Tiana England, a guard on the women’s basketball team, said that as of now, “We don’t plan on doing that.”

It is plain to see that on both the men’s and women’s teams, there is no definitive answer on the controversial topic — which, among other things, will make for an interesting season.

“I’m pretty sure that’s something that will be mentioned soon. We shall see,” guard Bryan Trimble Jr. said.

Forward Justin Simon said that although he is not sure if the team will participate in some form of protest during the national anthem, “It’s interesting to see how those NFL teams and owners handled all that, it’s inspirational to watch.”