Red Storm Pull Away in Second Half to Defeat St. Francis Brooklyn 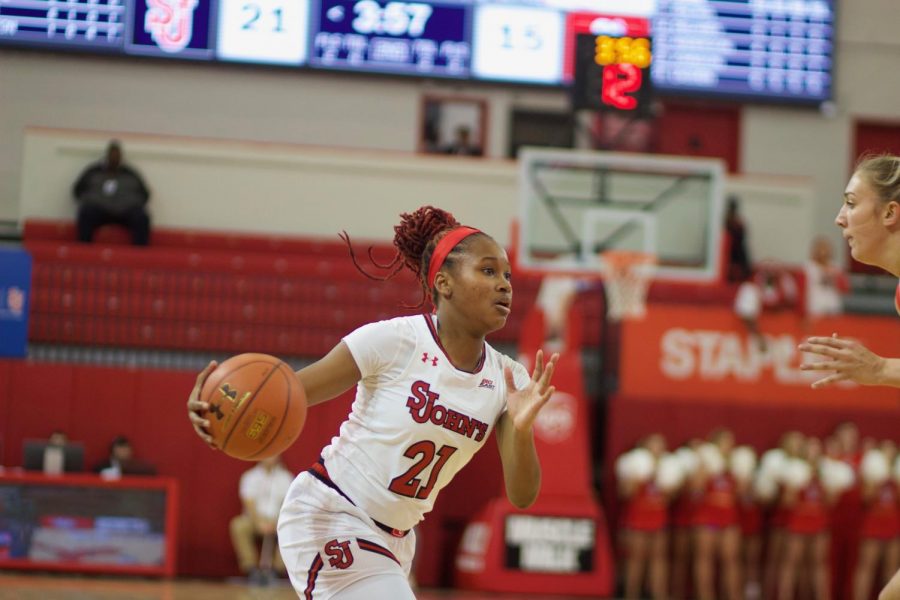 Tiana England attacked the middle of the floor, a defender in the paint, two teammates on either side. Just as she crossed the free throw line, the redshirt freshman guard looked left but passed right, hitting Qadashah Hoppie on a no-look pass that she caught in stride before finishing with an and-one layup.

It was England’s fifth assist on the night, the play coming late in St. John’s 73-49 season-opening win over St. Francis Brooklyn. It was England’s first regular season game after sitting out her freshman year with a torn ACL. She finished with 12 points in 30 minutes and found opportunities around the basket later in the game after turnovers plagued her early on.

Hoppie and guard Andrayah Adams each scored 16 points off the bench. Senior Maya Singleton recorder her first double-double of the season with 10 points and 11 rebounds to go along with five blocks. As a team, the Red Storm blocked a program record 14 shots, according to redstormsports.com.

Despite a 25-20 halftime lead, St. John’s shot 28% from the field in the first half of play and only recorded five points off of 15 forced turnovers. Head Coach Joe Tartamella said postgame that his team cleared some mistakes after the break and executed better in the second half.

“I thought we played a much better second half,” Tartamella said. “I wish we had played the game like we had played the fourth quarter…Certainly happy with how we finished, and we’re going to try and carry that over as we get ready for William & Mary.”

The Terriers out-rebounded the Red Storm 23-17 in the before halftime and forced seven turnovers. Mia Ehling hit two three-pointers and Abby Anderson contributed four points to keep the score close despite the turnovers, many of which came from St. John’s playing passing lanes and getting steals off of the full-court press.

After an Alex Delaney three tied the game at 25, the Red Storm went on a quick 8-2 run to go up 33-27 following an England layup. A transition bucket by Hoppie put the team up 46-34 late in the third quarter. Going into the fourth, the Johnnies led 49-37.

In the middle of the fourth, the Red Storm started to pull away. Two consecutive shots from England put them up 56-45 and ignited a 17-4 run down the stretch. Preseason All-Big East Team selection Akina Wellere converted a three-point play before drilling a three, putting St. John’s up 66-49 with just over two minutes to go.

Moments later, England found Hoppie on the nifty pass to put the team up 19, sealing a victory for St. John’s in their season opener.

“I think coming off the bench and energy,” Hoppie said of her performance and how she can impact the team. “That can spark the team up and keep things going. And contribute in any way possible.”

St. John’s will face off against William & Mary next Friday at Carnasecca Arena, a team that the Red Storm defeated on the road 73-57 last season. And after a first game with many areas in which they can improve, Tartamella believes his team will learn from their first game and correct mistakes as the season progresses.

That bounce back is important,” he said. “We talk about forgetting mistakes, making sure that we’re doing the things we need to do mentally to stay positive in our minds because the mental toughness piece is important.”