The Red Storm have plenty to look forward to next fall, even after heartbreaking loss in the Big East Semis to Georgetown 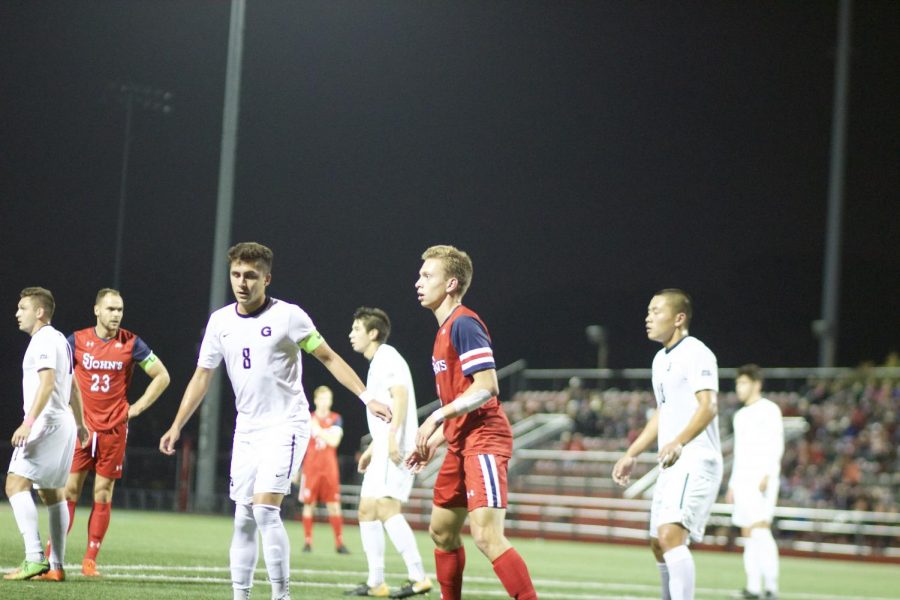 Alistair Johnston, who tied for the team lead in points, will return to a Red Storm squad that exceeded expectations in 2017 (Torch Photo/Nick Bello).

The Red Storm renaissance wasn’t going to be an overnight process. Still, the sting of defeat throbs like an open wound as the St. John’s men’s soccer team lost in the Big East semifinals to Georgetown, 2-1 last Wednesday.

“I thought we played better in this game than we did the day that we beat Georgetown,” said Head Coach Dr. Dave Masur. “We had more quality chances. We broke them down in transition. They’re a real dangerous team.”

All season long, the Johnnies were not offensive juggernauts. The squad ranked seventh in the Big East in goals scored over the course of the campaign, so falling behind Georgetown 2-0 early on in that postseason showdown might have seemed daunting.

But this Red Storm squad was no stranger to adversity. Three straight losing seasons had them in the basement of the preseason rankings, predicted to finish eighth in the conference by Big East coaches far and wide.

“The guys have really worked so hard and have learned how to really push together and battle for each other, run for each other and sacrifice for each other,” Masur said. “When you put a lot into something, it hurts when it doesn’t go your way and we saw that today.”

There was early-season hope in a defense that surrendered just two goals in those first four matchups.

This stingy back-line play, naturally assisted by the peak performance of star goalkeeper Andrew Withers, set the tone for a defensive-driven transition toward success. Leaning on the defense, the Red Storm were led by scorer’s like midfielder Alistair Johnson, whose six goals led the club. The offense did its best to reap the benefits of a stalwart defense.

Aided by a flurry of Johnson goals, the Red Storm pulled off four wins in a row following the slow start, gliding to the top of the Big East with an upset 3-0 victory over Xavier toward the end of September.

The Johnnies were flying high, reminiscent of the dominant Queens clans of the 1990s and early ’00s.

Just as the boys were hitting their stride, the slog of a full soccer schedule began to hit. A 5-2-1 record quickly turned into a 5-6-2 mark and the nightmares of recent seasons past began to resurface. Bad luck began to strike, shots were not finding the back of the net, and it seemed like every defeat was as gut-wrenching as the last. Those four losses all came with a one-goal margin.

Once more, it appeared the Red Storm would be on the outside-looking-in at the battle for Big East supremacy. True to the roller-coaster ride that was this season, once more the pessimistic outlook flipped.

Withers solidified into a brick wall in goal, capping the season with a 0.71 goals against average mark and the law of averages began to shift toward the boys of Belson Stadium.

After dropping those four one-goal matches, the Johnnies pulled out three straight one-goal wins of their own, headlined by a thrilling 2-1 double-overtime win over Villanova at the end of October. Following a 1-0 upset victory over 10th-ranked Georgetown, Coach Masur’s 400th win in the collegiate ranks, momentum was carrying the Red Storm over the final hill into the postseason and their first Big East Tournament appearance since 2012.

The roller coaster rose and rose through a first round victory over sixth-seed Creighton. But what comes up, must come down. Harry Cooksley brought the Johnnies within one after a 77th minute score. But the eventual Big East Champions proved stout. The roller coaster ride settled. The Red Storm season was over.

The defense cracked, ever so slightly, and the offense was unable to pick up the slack. And yet, rays of hope shine through Belson once more.