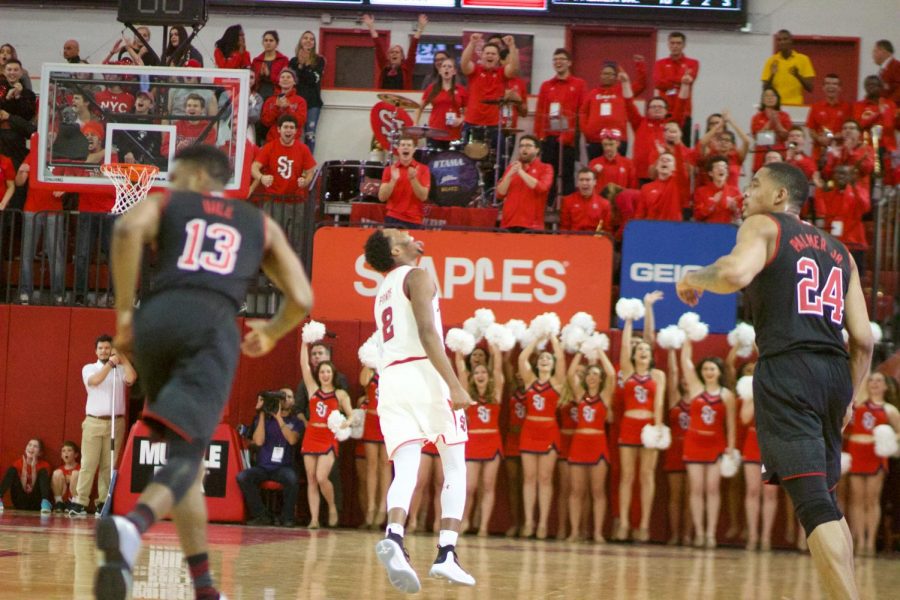 You could hear the celebration from down the hall.

That’s how loud the Red Storm men’s basketball team was after they dismantled Nebraska, 79-56, in front of a rambunctious crowd at Carnesecca Arena on Thursday night.

“We knew coming into this game that it was going to be big for us,” Marcus LoVett said. “We wanted to come out here with a lot of energy. Our fans gave so much energy out there for us to exert more energy. It was beautiful just to be in that environment.”

The excitement was warranted for the Red Storm as they conquered their first high-major opponent in the Cornhuskers, who play in the storied Big 10 Conference. St. John’s had beaten New Orleans and Central Connecticut in its first two contests, but Nebraska also came in with a pair of victories under its belt.

‘I feel like this game was a big test for us,” Shamorie Ponds said. “I think this was our toughest game so far. It tested our heart, our defense, our communication, and we just needed this win.”

It was a slow start for both teams, though, with the Johnnies fighting their way through a sloppy first four minutes. They regrouped at the media timeout, though, and the result was a 9-0 run that turned a 5-2 deficit into an 11-5 lead, punctuated by a three from Justin Simon that injected some juice into the late-arriving crowd.

Ponds came alive near the end of the first, scoring six consecutive Red Storm points with about five minutes to go. And revitalizing an offense that trended toward the conservative for most of the first 20 minutes. LoVett’s circus layup to beat the buzzer had a similar effect, sending the Red Storm to the locker room amid a chorus of cheers.

The Red Storm defense was nothing less than stifling, holding Nebraska to just 24 first-half points and forcing 11 turnovers. St. John’s could have pushed their advantage even further had they not botched a few fast break opportunities in the first half. Still, they maintained a 13-point advantage at the break.

“Tonight was the first time I saw our defensive quickness and athleticism show,” Head Coach Chris Mullin said. “We didn’t really get into a groove offensively, but our effort was tremendous.”

Marcus LoVett showing off the handles. He put the defense on skates on back-to-back possessions, here is the first. #SJUBB up 15-8. pic.twitter.com/l14B3Xyao3

After shooting a pedestrian 40 percent in the first, St. John’s came out with guns blazing to start the second. They converted their first six attempts from the floor, but Nebraska hung tough, draining a pair of three-pointers to stay within striking distance.

As is expected with two teams from historically tough conferences, the game was chippy. There were 11 combined fouls in the first seven minutes of the second half, some of which were questionable calls.

There was no definitive turning point that handed the Red Storm the victory. Instead, St. John’s simply ran Nebraska ragged, shifting into their extra gear and getting the 4,600 fans in the seats to respond. Slowly, the Johnnies pushed their lead back up to 15, then 18, and by the time the Cornhuskers really dug deep into their bench, the game was essentially over.

Even foul trouble couldn’t slow down the Red Storm offense, though, as they shot 47 percent in the second half and shaped up in transition. They outscored the Cornhuskers 10-2 on the fast break in that frame, highlighted by Ponds’ and LoVetts’ ice-cold skillsets. The sophomore duo combined for 47 points, including a game-high 22 from Ponds.

Justin Simon finished with his second-straight double-double, tallying 13 points to go with 12 rebounds. Kassoum Yakwe finally got into the scoring column, registering his first two points on a pair of free throws halfway through the final 20 minutes to give St. John’s a 20-point lead.

Four Red Storm players hit double figures in points, and they outrebounded their opponent for the second consecutive game, a surprising factoid from an undersized squad.

Here's the first of two superb alley-oops that have the Carnesecca crowd chanting "start the buses." #SJUBB pic.twitter.com/6qtcoysFvt

As was the case with the Red Storm’s first two tilts, they cruised in the final five minutes, exploding for a pair of alley-oops, making the crowd swoon and drawing the infamous “start the buses” chant directed towards the Cornuskers.

But unlike the first two games, Mullin saw a complete effort from his squad, one that could spring them into the national conversation for the first time in the head coach’s tenure.

“Tonight’s the first time I saw [the team’s athleticism] on both sides,” Mullin said. “I don’t know if we win a game like this last year.”