St. John's wasn't perfect, but they're coming back to Queens 6-1 after two key victories 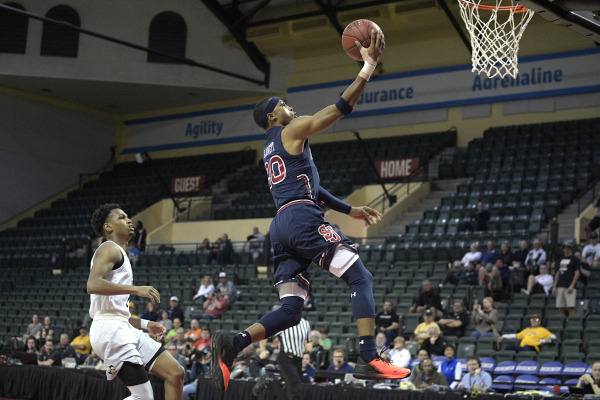 The St. John’s men’s basketball team wanted a challenge, and their wishes came true this weekend at the AdvoCare Invitational. After picking up four wins in four tries with relative ease to begin the season, the Red Storm were ready to see how their high-flying philosophy and alpha-male confidence stacked up against a few very good Division I teams.

They came out of the tournament with a 2-1 record, bringing a third-place finish back to Queens that culminated in an ugly 46-43 victory over Central Florida after a win against Oregon State in the opener and a loss to Missouri in the semifinals.

“It is definitely something that is on our minds and something we think about,” Marvin Clark II said of his team’s desire to play top-tier competition following the Red Storm’s final tune-up last week against Molloy. “We feel that we can play with anybody, but it is just a matter of coming out and bringing it from the jump.”

If there’s one thing that St. John’s did not do consistently in three games, it was playing with intensity at the beginning of the game. The team held the lead for 30 seconds through the first 19 minutes of the game against the Beavers on Thanksgiving, a 9-7 advantage some five minutes into the contest.

They faltered similarly against a very good Missouri team the next day, falling behind by 16 with over six minutes left in the first half. Unlike the first game, though, the Red Storm couldn’t hold on after their furious comeback gave them a 50-44 lead in the second half.

“They went 14-of-27 from three, so you have to give them some credit,” Head Coach Chris Mullin said following the 90-82 loss that ended his squad’s season-opening five-game win streak. “ I thought we got off to a bad start. They pounded us on the boards.”

Against Oregon State, the Red Storm buckled down defensively in the second half, a testament to the adjustments that Mullin and his staff made at halftime. As the offense picked up their points from the free throw line, St. John’s held the Beavers to just four field goals from inside the three-point line.

Shamorie Ponds finished that tilt with 26 points, making all of his 15 tries from the line, then scored a career-high 31 against Missouri.

St. John’s lost the rebounding battle in the first two games, but the 38-34 margin was much more manageable against Oregon State, especially since they corralled 15 offensive rebounds and forced 21 turnovers.

In the knock-down, drag-out fight of a game against UCF on Sunday, the Red Storm corralled one more rebound than the Knights, an impressive feat considering the opposition had 7-foot-6 mammoth Tacko Fall. Fall had just six rebounds and fouled out in 18 minutes of action.

Marcus LoVett fouled out for the Red Storm, accounting for five of the 40 total fouls between the two teams. Bashir Ahmed and Tariq Owens both picked up two fouls in the game’s first six minutes, but the Johnnies pulled away for the second time in three games, going up by as much as 10 with under six and a half minutes left.

“That was a great win for us,” Clark II said after the game. “We need those kind of gut-wrenching wins. That’s a tough team and we were able to pull it out. It wasn’t the prettiest basketball, but I’m happy that we were able to win a game without making a bunch of shots or with our best scorer not having his best night.”

Clark II finished the finale with 11 points and seven rebounds after fouling out of the contest against the Tigers. His absence was felt, as Missouri sank bucket after bucket to put the game on ice.

The Red Storm were prone to foul troubles and defensive lapses, but they still managed to compete in each game, all of which were against teams that had zero or one losses. The two wins are tempered by the fact that the semifinal matchup was winnable, but the positives can’t be overlooked. They shot well, flashed defensive intensity and showed resilience that simply wasn’t there a year ago.

“We dropped one against Mizzou that we felt like we should have won, so it was very pivotal. During our day off yesterday, we talked about making sure that we left Orlando with a 6-1 record. I’m happy we got to accomplish that goal.”