SJU Alum Charged with Series of Murders in Florida 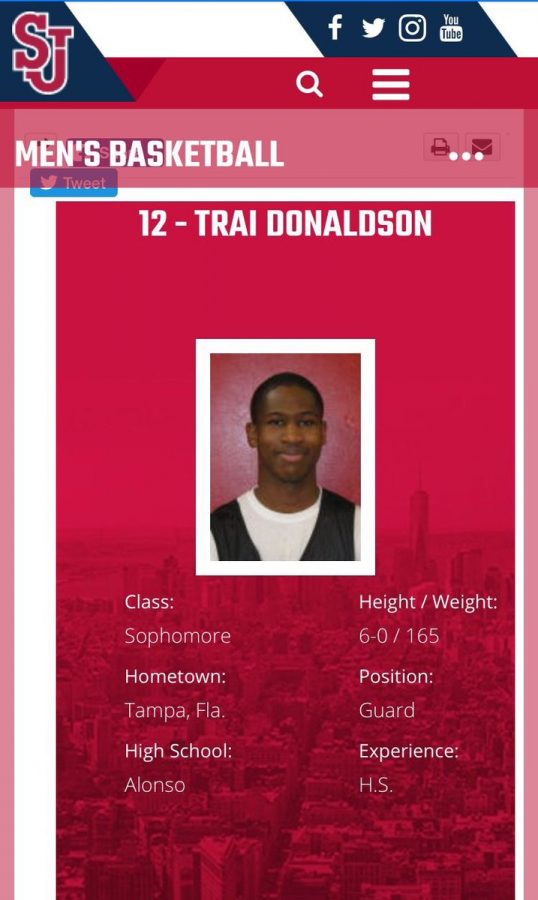 Howell "Trai" Donaldson III's profile on the University's athletics site, which has since been deleted (Torch Photo/Dylan Hornik).

A St. John’s University graduate and former basketball walk-on was arrested and charged with four counts of first-degree murder in Tampa, Florida Tuesday night, according to police.

In a press conference, Tampa Interim Police Chief Brian Dugan announced that Donaldson was taken into custody at a McDonald’s in Ybor City, Florida yesterday afternoon. Donaldson, who worked at the restaurant, was collecting a paycheck and handed his manager a bag with a gun inside. The manager then notified the police.

“Fifty-one days ago, I said this was a struggle between good and evil,” Tampa Mayor Brian Buckhorn said at a press conference yesterday. “Tonight, goodness has won… Tonight is the beginning of when justice will be served, and then the process will occur when this individual rots in hell.”

Donaldson admitted that he owned the gun used in the murders, but did not admit to the killings, according to the Daily News.

An SJU spokesperson confirmed that Donaldson attended the University beginning in 2011 and was a walk-on for the basketball team during the 2011–2012 season. He graduated in January with a degree in sport management.

Donaldson never appeared in a game, but a page containing some biographical information such as his height, weight and hometown appeared on the school athletics site. It has since been taken down.

Harrison, now a professional player in Turkey, called Donaldson a “hard-nosed defender” and said that the two of them would play on the recreational courts after practice.

“I couldn’t believe it,” Harrison said about hearing the news. “It’s a sad thing.”

According to sources, Donaldson was a member of a group of about five campus recreation frequenters who assisted the team with early morning practices for about a week. The walk-ons were removed from the program before basketball season, sources say, so Donaldson never suited up and did not have a locker in the St. John’s locker room.

In addition to attending St. John’s, Donaldson also worked for the University in several capacities, according to his LinkedIn profile. He worked for Campus Recreation from October 2013 to April 2014, where sources say Donaldson’s role with Conference Services from October 2013 to January 2015 and as a Student Marketing Assistant for the Athletics Department from September 2015 to May 2016.

The University said it cannot comment further on the situation as the investigation is pending.

He also worked for the New York Mets as a guest experience host during the 2016 season. Neither the Mets nor St. John’s Athletics has responded to a request for comment.

According to the New York Daily News, Donaldson was arrested once while he was in New York City, but the case is sealed.

After graduation, Donaldson moved back to Florida, where he worked for Ultimate Medical Academy, a nonprofit healthcare school, for five months, according to his social media profiles. The Academy responded to The Torch with a statement Tuesday afternoon in which they confirmed his employment and the reason for his ultimate termination.

“Ultimate Medical Academy recently learned of the arrest of Howell Donaldson III,” the statement says. “He was employed at UMA from February 13 to May 2, 2017 working in a customer support role. He was terminated for absenteeism. Per UMA hiring policy, Donaldson passed a background check prior to employment. UMA has reached out to the Tampa Police Department to offer our assistance. Like everyone in Tampa Bay, we are relieved to learn there has been an arrest in this case and our thoughts and prayers continue to be with the families of the victims.”

This story is still developing and will be updated as more information becomes available.