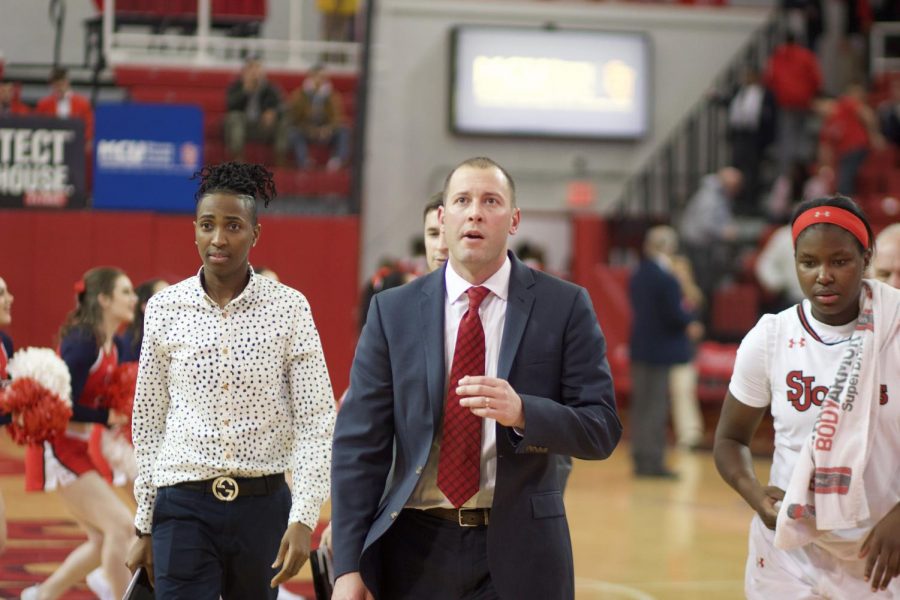 For the St. John’s women’s basketball team, all is well that ends well.

The Red Storm wrapped up their lengthy road trip with a 74-64 victory over Florida Sunday night, pushing their record to 3-2 over a ten-day span that snapped their season-opening three-game win streak but ended with a triumph over a solid Hurricanes squad.

Both St. John’s losses came at the hands of top-20 opponents — including defending national champion South Carolina — down in Estero, Fla., where the Johnnies reached the semifinal of the Gulf Coast Showcase tournament after a 76-48 drubbing of Western Michigan in the opener.

They shot extremely well against the Broncos, hitting just under 50 percent of their shots from the field, but struggled to take the lid off the rim in their tilt against the Gamecocks. They scored just 16 points in the first half, and did not hit a shot from the field over the last seven-plus minutes of the first quarter.

“This was a great game for us to build off of,” Head Coach Joe Tartamella said. “I thought we played as hard as we have early in the season and we need to continue to improve.”

Tartamella’s squad followed that clunker up with another loss against 17th-ranked South Florida. While the Red Storm never really made South Carolina sweat, the Bulls had to fight to pull out a 68-59 victory.

The Red Storm had an answer for almost every South Florida blitzkrieg, keeping the deficit around 10 or less for most of the game. They nearly had the last laugh when a 9-2 run cut the USF lead to 59-57 with just over two minutes left, but St. John’s 17 personal fouls finally caught up with them. The Bulls hit seven of their 10 free throw attempts in the final 2:13 to pull away.

After two tough battles, the Red Storm’s matchup against Albany should have been considerably less stressful. It would have been even more so if it wasn’t for Andrayah Adams. She finished with a season-high 23 points and shot 80 percent from the floor off the bench.

The sophomore’s effort on the offensive end, coupled with freshman Tiana England’s 6-for-6 shooting night, helped the Red Storm grind out another back-and-forth battle that featured 10 ties and five lead changes.

It all concluded with another great offensive attack against Miami Sunday afternoon. Four Red Storm players hit double figures in scoring, the fifth time in seven games this season that St. John’s has accomplished that feat.

Maya Singleton was an absolute force inside against the Hurricanes, tallying 15 points and 17 rebounds, including six points during an 11-2 run that gave St. John’s a 31-20 lead. Akina Wellere put the game on ice in the fourth, putting on a dynamic 9-0 run by herself with a three, a mid-range jumper and a pair of layups.

“I really thought this was a complete game for us,” Head Coach Joe Tartamella said following the win. “I’m very happy for our players to get a hard-fought win against an ACC opponent on the road. We had some great plays down the stretch by Akina Wellere and Tiana England.

Next up, the Johnnies host Tartamella’s alma mater, James Madison, on Saturday. That game is the first of four consecutive matchups at Carnesecca Arena that take the Red Storm right through the end of the fall semester.