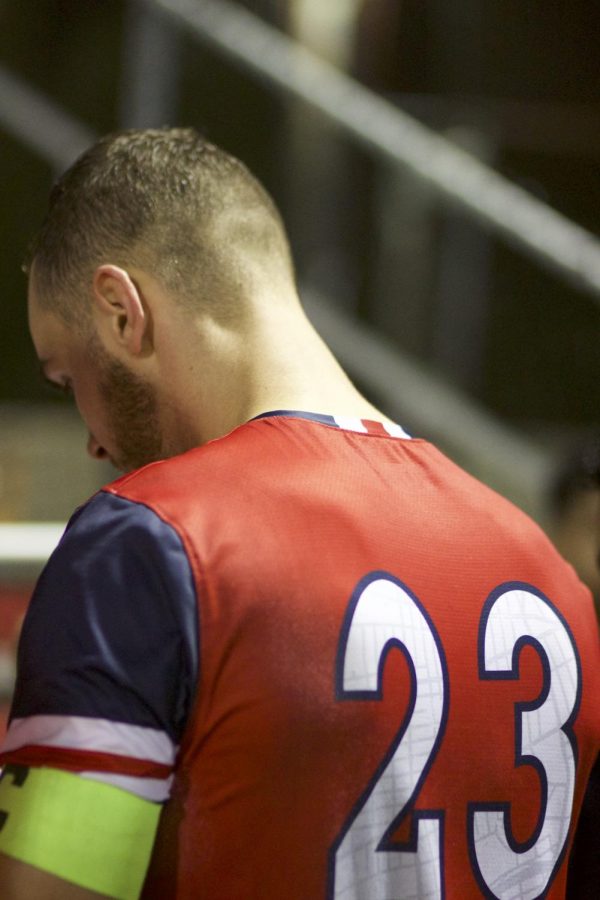 Losing stings. There’s no sugarcoating it.

One can work, grind, thrive, fall, rise again, cry, rejoice, hurt, win. Then it can all come crashing down, in the case of the St. John’s men’s soccer team last month, in just 90 short minutes.

For some, the work will continue into the offseason and next fall. For some, the road to a Red Storm renaissance ended on a November afternoon in our nation’s capital.

Senior midfielder Harry Cooksley took home the Big East Midfielder of the Year Award. He was a member of the all-conference first team. For the second consecutive season, he finished second on the squad in goals scored. It truly was a banner year.

“It’s lovely to get the awards and get the individual recognition,” he told The Torch last week.

And yet, his road comes to an end. So some disappointment prevails.

“At the end of the day it’s a team sport and it was a horrible way to lose it to Georgetown at the end,” he reflected. “We wanted to go a lot further this year,”

With a slightly writhing tone, the now-former hero of the Belson Stadium pitch recounted missed opportunities from the decisive Big East 2-1 semi-final loss to Georgetown, the eventual conference champions.

”I take every loss as my fault, and every win is a team effort,” Cooksley continued, “but every loss I put on my back, I feel like I didn’t do enough.”

Cooksley acknowledges that this St. John’s team was publicly met with low expectations. After all, an NCAA Tournament invitation had not been in their sights since 2013, a very peculiar position for Red Storm teams in the Dr. Dave Masur era.

And yet, discouragement did not pulsate through the Johnny locker room. They knew their abilities, and knew that they could make some noise in a powerhouse Big East conference.

“We were predicted to come eighth in the Big East this year, and to finish third and get to the semi-final, it was a great year for us,” the soon-to-be-graduate reminisced, “I think we could’ve been challenging for a Big East Championship if a couple of results went our way. But at the end of the day, it’s a great season.”

“We shocked a lot of people.” he beamed with satisfaction.

The London-native’s personal success certainly did not shock himself. Cooksley talks about easing his way into the Division-I game in his initial campaign with the Johnnies. But expectations for his second go-round were sky high.

“I set individual goals and that was my goal, to win Midfielder of the Year and to be an All-American,” he said confidently, “I never want to limit myself. I don’t see why I can’t do any of that.”

“I have the players around me to be great,” the Limestone College-transfer went on, always singing the praises of his ‘mates around him.

One would imagine that such praise is mutual. There’s no denying that Harry Cooksley works wonders for a team on the field, but his contributions do not stop at his fancy footwork.

The midfielder was struck by the injury bug in September, setting him out for a month-long period in the early portion of the new season. The team prevailed, winning four straight in Cooksley’s on-field absence, and the wise veteran found ways to contribute to the cause, even without lacing up his boots.

“[You do] everything you can. Most of all, being at every single practice with the boys and encouraging them,” he explained of his sideline assistance, “and they got the job done in the games I wasn’t there.”

A leader on the pitch, a leader off the pitch, and an accolade-awarded champion. Cooksley is indeed a graduating senior, and so his time as a Johnny has come to an end. For the men he is leaving behind, however, he believes this is just the beginning.

“Just carry on listening to Coach,” he says of the keys for future St. John’s success, “he’s been doing it for 25 years now. Take every bit he says on-board.”

“The MLS Draft is the 19th of January and the combine’s the 17th. I’ve been invited to that,” Cooksley said of his post-grad plans, “hopefully I’ll show well at that and I’ll be a first round pick in the draft.”

Of course, losing (temporarily) stings. But Harry Cooksley is a well-proven winner. Just take a look at his Red Storm résumé.

He’s ready to take the next step.