The Key to St. John’s Soccer Success? A Humble Freshman

Jack Shearer's play earned national recognition and sparked the Johhnies into the playoffs. 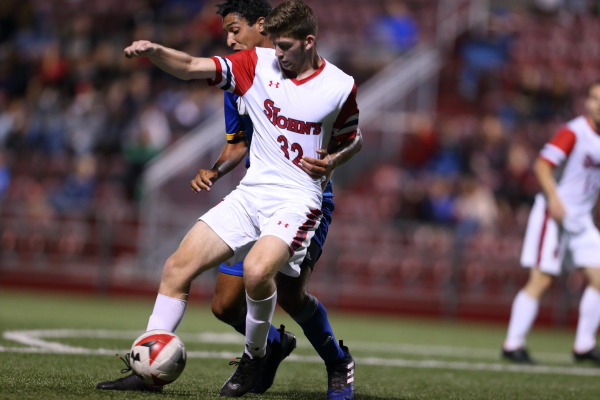 Heading into halftime scoreless  against Temple in early September, the St. John’s men’s soccer team was staring down a fourth consecutive game without a win. For much of the first half, St. John’s looked out of sync in the attacking third, and hadn’t scored for over 300 minutes.

Substitute striker Jack Shearer came in, and St. John’s looked like a much different team. Goals from Alistair Johnston and Matt Forster gave the Johnnies a much needed 2-0 win that night. But Shearer was just getting started.

“I didn’t think I was going to have a huge role, but I was extremely thankful when coach called my name and I made sure I was ready,” Shearer said.

He came in and played the role of a true striker, holding up possession for his team,and letting talented midfielders Harry Cooksley and Alistair Johnston play off him.

“It’s not just me, as a team we really bought into that style of play, chasing down loose balls for each other,” Shearer said. “We built a lot of early chemistry during the season.”

If you ask Shearer about all of his success, he gives all of the credit to his teammates.

“I knew heading into this season that this team was so talented,” he said. “I didn’t think I was going to have as much individual success, but I knew this team had a lot of potential.” In the team’s run to the semifinals of the Big East Tournament, he was instrumental. He added that it all came down to having his teammate’s trust, which allowed him to play free on the field.

All three of his goals came in conference play, including two game-winners, and he tied for the team league in points in conference play with seven, the same amount as Cooksley, this season’s Big East Midfielder of the Year.

His play was recognized nationally. In September, he joined senior center half David Enstrom on the Top Drawer Soccer National Team of the Week after Shearer scored both goals against then-ranked Xavier.

Later in the year, Top Drawer Soccer named Shearer to the Top 100 Freshmen list, ranking him as the 43rd-best first-year player in the country. Shearer’s three goals and three assists might not jump off the page, but the impact he had on this team doesn’t show up on the score sheet.

For a team that likes to be set defensively and play on the counter, having a forward that can hold up the ball and get his midfielders involved is one of the keys to Masur’s system.

Shearer will surely be a key part of the Red Storm’s offense next season, especially with Cooksley graduating. He’ll only be a sophomore, but after appearing in all 19 games for the team this season, he’ll return a plethora of game experience.

“I need to work on my left foot, and I need to get stronger and more fit,” Shearer said on what he needs to improve upon this offseason. “I’ll do anything for the team, and help with whatever coach needs me to do.”