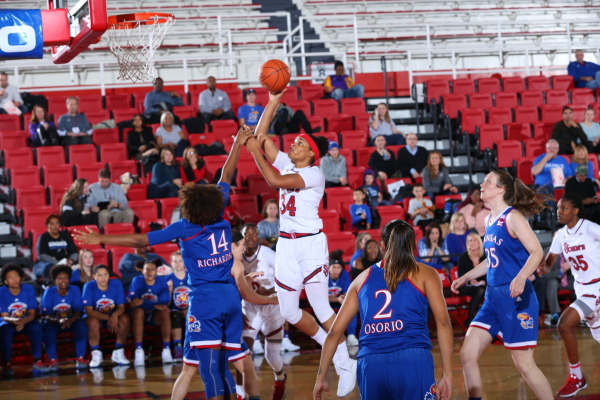 Maya Singleton laughed at the fact that she bobbled her final chance at a rebound in overtime.

She replayed the moment in her head, recreating it by watching an imaginary basketball fall from the rim as she guided what would have been her 25th rebound into her hands.

She said she had it, but it slipped and a teammate picked it up. Had she held on, Singleton would have broken a 41-year-old record held by Mary Doyle.

“I’m out there going against girls that are bigger than me,” Singleton said of her mindset when rebounding. “Just because you’re bigger than me doesn’t mean you’re going to get this rebound. It’s just that simple, honestly.”

Her 14 points and three steals complimented her historic performance on the boards, and all of it was needed as St. John’s and Kansas needed an extra five minutes to declare a winner.

It was the first time in program history that the Red Storm played consecutive overtime games, having lost in double overtime to Fordham last week. This week’s result was different, as the team used a 14-2 overtime run to defeat the Jayhawks 65-53.

The first half was highlighted by the troubles both teams had finding the basket. Kansas (8-2) shot just 33 percent in the first half, with the Johnnies at just 24 percent. 13 Kansas turnovers led to seven points for St. John’s, who allowed 16 of the 22 points they gave up to come in the paint.  Alisha Kebbe led the Red Storm with seven first half points as the teams went into halftime tied.

The pace of the second half picked up immediately. Singleton hit a layup to put St. John’s (7-3) up by two. Kansas junior guard Brianna Osorio scored six straight points to give the Jayhawks a 28-26 lead before Akina Wellere answered with a long three. Despite being over the foul limit for the final 4:22 of the quarter, the Red Storm kept Kansas off the line.

Two free throws from Singleton and another three from Wellere propelled St. John’s to a 42-40 leads going into the fourth quarter.

Quick buckets for the Johnnies to open the final ten minutes of play put them up 47-42. After Wellere hit two free throws, Kansas junior forward Austin Richardson hit a jumper to put the Jayhawks up 50-49 with 2:43 remaining.

A 10-second violation on Kansas with 44.2 seconds remaining in the fourth quarter gave the Johnnies a chance to take the lead. A missed three-pointer from Andrayah Adams forced the Red Storm to foul. Kansas’ Christalah Lyons made one of her two free throws to give them a 51-49 lead with 27.7 seconds remaining.

Out of a timeout and a play called by Head Coach Joe Tartamella, Singleton scored the tying basket with 22.1 seconds left. On the ensuing possession, Kansas lost the ball near the baseline. Imani Littleton fell on it for the Red Storm as time expired. After further review from the officials, .5 seconds were put on the clock and Kansas inbounded from under the basket. Richardson’s hook shot went in as her teammates stormed the court and greeted her, but the call was overturned.

“When that basket wasn’t counted at the end and gave us a second life, we took hold of that,” Tartamella said after the game. “And obviously you can see 14-2 in overtime…all of a sudden we regained the look that I’ve seen for the better part of nine games.”

The team started the overtime period with a 7-0 run. After Kylee Kopatich hit a pair of free throws to bring Kansas within five with 1:44 remaining, Wellere responded with a three to give St. John’s a 61-53 lead. Free throws from Qadashah Hoppie and Tiana England sealed the game.

Despite her shooting struggles on the night, Wellere said it was her teammates who encouraged her and kept her confident throughout the night, including her big shot in overtime.

“My teammates just kept telling me to believe in myself,” she said. “I know that I’m not going to make every shot, and sometimes I overthink things. So it was just to stay true to yourself, say ‘you’re going to be okay, and you’re going to knock down a big one.’”

Wellere’s 18 points led all scorers and her shots in the clutch propelled the Red Storm. But it was Singleton’s record-tying game that kept the energy alive, something that didn’t surprise her coach.

“I love that kid,” Tartamella said of Singleton. “I think she plays as hard as any kid I’ve ever coached…Fortunately for us tonight, it really paced us. I haven’t seen a number like that in my career.”

St. John’s will remain home to face Buffalo on Thursday at 11am. The Bulls are led by senior center Cassie Oursler’s 13.3 points per contest. Buffalo will travel to Queens with an 8-2 record, with both losses coming on the road to Arizona State and Niagara.