The World was Much Different When St. John’s and Duke First Played

St. John's once beat Duke 44-28. That was nearly eight decades ago. What has changed since then? 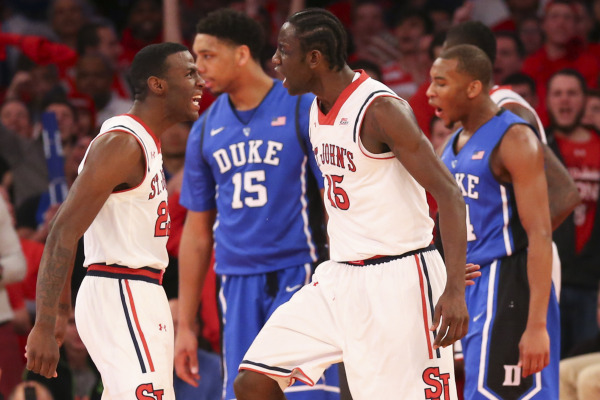 On Feb. 4, 1938 at Madison Square Garden, St.John’s and Duke squared off for the first time. The Johnnies, or whatever their nickname was back then, defeated Duke 44-28. That was 79 years and 364 days prior to their meeting on Saturday.

The world was a lot different back then. World War 2 hadn’t started yet and the United States was still in the midst of The Great Depression. FDR was only a year into his second term as president and Fiorello La Guardia was the mayor of New York City. The film Snow White and the Seven Dwarfs was released, oddly enough, on Feb. 4 and was a huge success. The music charts had big names like Fred Astaire and Bob Hope.

The game of basketball in 1938 also looked very different. The three point line was not invented yet, so games were very low-scoring compared to today’s standards. Player’s jump shots would cause any coach today to question the laws of physics, and shots close to the basket would make today’s fans cringe.

Players wore short shorts and shoes that looked like they were supposed to be used for ballroom dancing. Spectators wore nice clothes and you couldn’t buy your favorite player’s jersey in the concourse area, let alone a t-shirt with Johnny Thunderbird on it.

St.John’s was still located in Brooklyn and the Queens campus wouldn’t be built for years to come. College cost about as much as one textbook today. The students at St.John’s actually wrote down notes instead of typing them on their computers, and they weren’t distracted by their cellphones in class. You couldn’t pay St. John’s students of today to wear the fashion styles of the predecessors.

In 1938, legendary St. John’s coach Lou Carnesecca was only 13-years-old and probably hadn’t considered coaching basketball or even winning a National Championship. At this time ,Joe Lapchick, another St. John’s legend, was in his first season as head coach. Lapchick ended the season with a solid 15-4 record, something today’s St. John’s fans could only dream about.

The life of a college basketball was also probably a lot different. There wasn’t such thing as redshirt players until 1937. Scholarships weren’t given out, so players played just for the love of the game.

The debate of whether or not student-athletes should be paid or not was nonexistent. AAU basketball was nonexistent and the recruiting of players wasn’t followed as much as it is today. Players weren’t put in the national spotlight like today because their games weren’t televised, they didn’t have to worry about what they posted on social media because the internet wasn’t even an idea.

Times have changed immensely since the first meeting between these two teams. Hundreds of players have played for the two storied programs and both teams have combined for thousands of wins. St. John’s and Duke will meet once again on Saturday, where it all started 79 years and 364 days ago.

And it’s going to be a good one.