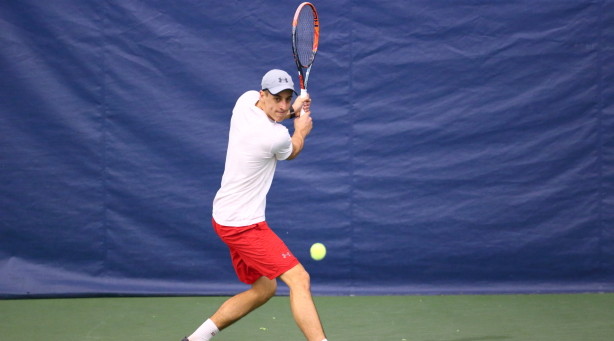 The St. John’s Red Storm tennis team came into this season with a new coach and new hope.

Head Coach Craig Schwartz was hired by the University in December of last year after being an assistant coach for the Appalachian State men’s and women’s programs.

While there, the teams earned numerous Sun-Belt All-Conference selections. Schwartz was a former NYCAC Player of the Year and ITA East Region Senior Player of the Year, and his  goal was to hit the ground running by helping his players on and off the court.

“I’m looking forward to creating a culture based off of hard work, discipline and respect at St. John’s,” Schwartz told Red Storm Sports.

Well, hit the ground running they did.

The team season started the season with much promise.

The Johnnies cruised to a 7-0 victory over Sacred Heart in their season opener at the National Tennis Center in Flushing Meadows.

It all started in doubles play when Luka Sucevic and Andrei Crapcenco won their match 6-1 from the number two position.

Dusan Vukicevic and Ognjen Trejgut also picked up a 6-1 win from the number three position. Singles play saw similar success thanks to Alan Nunez Aguilera dominating his match from the number two position with a pair of 6-1 sets.

It all culminated into a picture-perfect debut for Schwartz.

Since the hot start, much hasn’t gotten better from there.

The Red Storm have since lost three straight matches, and lost their first match at home this past weekend to Middle Tennessee State after being on the road for two straight matches in Hanover, New Hampshire.

Their second loss came against Dartmouth with a drubbing 4-0 defeat, highlighted by the pairing of Ognjen Trejgut and Alex Roszkowski rallying back for a 7-5 victory from the number two position.

The match against Buffalo to close out the trip was much closer, but showed the same result.

Trejgut gave the Johnnies a 2-0 lead after sweeping his opponent from the five position, but the Red Storm couldn’t hold on and lost 4-3 to the Bulls.

Despite their recent struggles, the Red Storm will turn to junior Luka Sucevic to guide them back in the win column.

Sucevic was named the Big East Men’s Tennis Athlete of the Week after their defeat of Sacred Heart, and earned the team’s first weekly award of the year. Sucevic, a junior from Serbia, attended Mississippi State prior to coming to Queens. He represented the Big East at the Oracle ITA Masters this past fall, playing the top seed to three sets.

St. John’s will have a chance to redeem themselves against Wagner on Feb. 9 at the National Tennis Center.

The Seahawks come into Queens with only one loss on the season, and a 3-1 record overall.