Lacrosse Looks to Rebound From Tough 2017 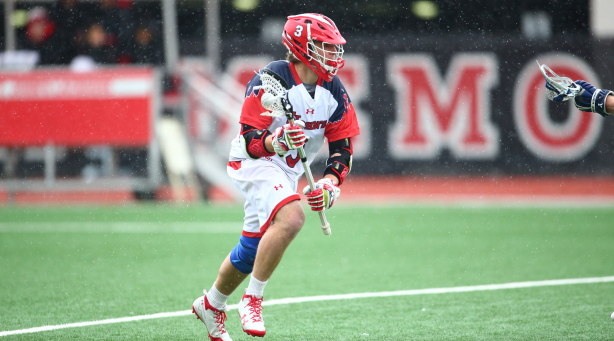 Pick your metaphor of choice. A clean slate;   a blank page; an empty canvas; they all lead back to one blissful concept: a new season.

And yet, the doubters rage on against Coach Jason Miller and the men’s lacrosse team. Six wins since 2014, just one last season and Miller’s fellow Big East coaches have the Johnnies pegged to finish dead last in the conference.

The underdog narrative might fit. And the Red Storm locker room is ready to take it in stride.

“We believe we can do things that nobody else thinks we are capable of doing,” said sophomore defenseman Pat Smyth.

Smyth, a preseason all-Big East selection, leads a collection of young talent that has impressed Coach Miller in offseason workouts.

But he wants them to keep pushing.

“All these young guys that came out and played for us last year, they don’t have to do something superhuman,” Miller said on the eve of the Red Storm season opener. “They just need to come out and be better.”

Sophomores Smyth, fellow defenseman Tim Kiel, and twin attackmen Joe and Mike Madsen lead the group of youngsters that Miller hopes can lead the Johnnies back to the top of the Big East heap.

Joe Madsen, who cashed in his first goal of the year in Saturday’s loss at 12-8 loss at No. 8 Rutgers, burst onto the scene as a freshman in 2017.

The Locust Valley native led the Red Storm in goals (20) and points (25), but remains hungry as a new campaign dawns.

“My shot and my stick skills are the two main things I work on during the off season,” he told The Torch. “There’s always room to improve in those areas.”

Madsen credits veteran leadership on the club as a key component of his banner freshman season, specifically citing senior attackman Jason DeBenedictis as a motivator in bringing the sophomore’s game “to the next level.”

When a squad struggles as recent Red Storm teams have, it is that leadership that can keep a team grinding on a daily basis, keeping a downtrodden attitude far away from the locker room.

Miller further sung the praises of what he called a “really good, hard-working” group of incoming seniors, aiming to carry the torch of Johnnie mentorship.

“The one guy that gets so overlooked because he doesn’t score a ton of goals for us is [senior midfielder] T.J. Marron,” Miller explained. “He’s our leader, he’s our energy guy, he’s our glue guy.”

It’ll be with players of Marron’s ilk that a St. John’s resurgence will come to fruition. It’s the little things that need to be honed in on, the toughness, the transitions, and maybe most importantly, the defense.

The Red Storm surrendered a nation-high 14.07 goals per game last season. The lead man down on defense, Smyth, expects that number to significantly dip.

“As a unit this year we’ve put a huge emphasis on communication,” he said. “It is impossible to be successful as a defensive unit if everybody isn’t on the same page. Some of that comes with experience playing with one another, but most of it comes simply by on-field communication.”

“If we can continue to grow in the communication department, our defense will put our team in a lot more favorable position,” Smyth added.

The road back to prominence will not be an easy one. High-profile match-ups with the likes of Denver, North Carolina and Hofstra lie ahead for the Red Storm. But Miller thinks the group is ready for the challenge.

“I wouldn’t want to do it any other way,” he confidently proclaimed.

Yes, they might be branded as the “underdogs.” But they’re not just ready to roll over.

The Johnnies are looking for some Red Storm redemption in 2018.

“If we just stick to our principles, continue to play for each other with a huge a chip on our shoulders,” Smyth concluded. “I think we will prove a lot of people wrong.”