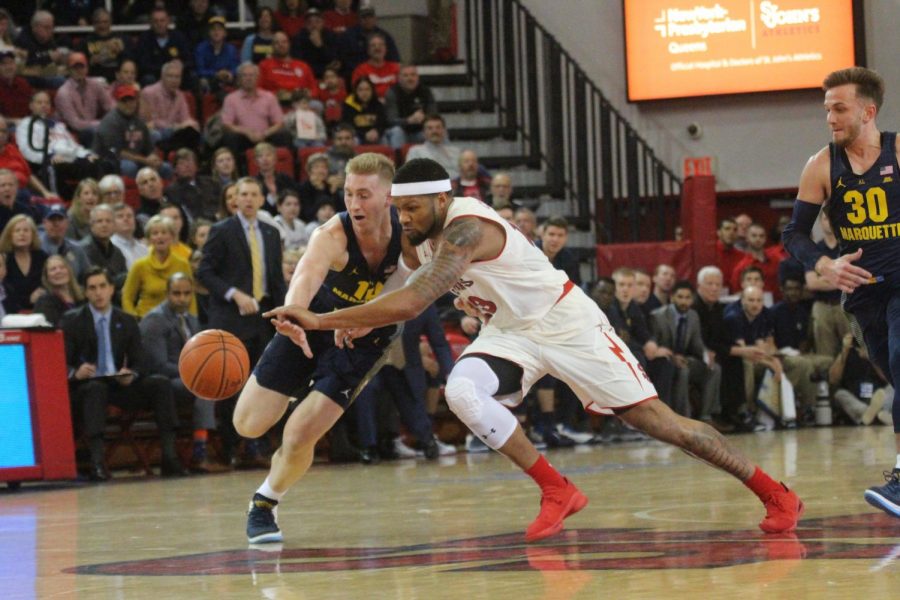 Head Coach Chris Mullin kept stressing to his team during their 11-game losing streak that all they needed was one game to go their way.

That one game happened to be a win over then-No. 4 Duke, and the Red Storm kept rolling this past week, taking down top ranked Villanova on the road, 79-75, and then returning to a sellout at Carnesecca Arena to beat Marquette, 88-76.

On Wednesday in Philadelphia, St. John’s controlled the tempo of the game, only trailing for under two minutes.

Instead of relying too heavily on the three-ball, as the team has done at times this season, they looked to attack the Villanova bigs  and get to the free throw line.

St. John’s only took 15 three-pointers during the game.

“I never walk into a game thinking that we have no chance,” Mullin said after the win. He also said that while the wins are important, he also admired the perseverance that his players have shown this season.

St. John’s went 19-24 from the charity stripe on the day, compared to Villanova, who only attempted 12 free throws. Despite a 26-point showing from sophomore guard Shamorie Ponds, it was far from a one-man show.

Clark converted a pivotal three-point play with 1:20 left to play to make it a four-pointgame as time winded down. Prior to Clark lay in, Villanova guard Jalen Brunson had engineered a 6-0 run by himself that had cut the St. John’s lead down to one.

Simon also contributed 10 rebounds, giving him his sixth double-double on the season.

Villanova was led by Wooden Award candidate Jalen Brunson, who finished with 28. Collin Gillespie also had one of his best games as a Wildcat, finishing with 12 points on 4-6 shooting.

After the team was greeted early Thursday morning by about 250 St. John’s students, they had two days of rest before taking on an explosive Marquette team in front of a packed Carnesecca crowd.

After a slow start filled with turnovers, St. John’s got going in the second half behind 44 points from Ponds, 27 of which came in the final 20 minutes to take down Marquette.

Ponds set the record for most points scored in Carnesecca Arena/Alumni Hall.

In the process, he became the first St. John’s player to eclipse the 40-point mark in a game since Marcus Hatten didagainst Rutgers back in 2003.

“It’s a blessing,” Ponds said of his performance after the game. “All the great players who came through this University, for my name to be up there, it is a dream come true.

“He’s been playing amazing basketball these past couple of games. I’m just like you. I get caught up watching sometimes,” Simon, who registered another double-double with 16 points and 11 rebounds, joked after the game.

The margin of victory for the game finished at eight, but the game was contested until the very end.

Every time St. John’s looked as if they were about to pull away, a string of Marquette three-pointers kept the Golden Eagles very much alive.

In the second half, the game within the game quickly turned into Ponds vs. Andrew Rowsey, who went toe to toe in scoring.

Rowsey finished the game with 26 points, while Sam Hauser and Markus Howard each finished with 18.

In addition to Ponds’ career day, Clark and Tariq Owens each contributed nine points, and Ahmed finished with eight.

St. John’s will look to make it four straight wins overall when they travel to the Windy City on Wednesday night for a must-win tilt against DePaul.

The Blue Demons came into Carnesecca Arena and dominated the Red Storm on Jan. 6, 91-74.