Two road contests with Villanova and Georgetown were split over the weekend. 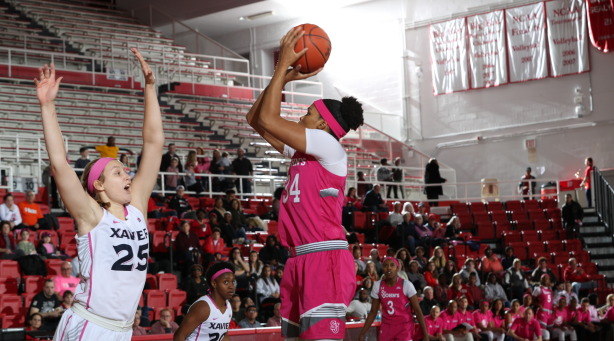 The St. John’s women’s basketball team headed into the weekend hoping to sweep Villanova and Georgetown in their final match-ups of the season, the Wildcats coming first on Friday morning.

The Red Storm entered the game with a 14-11 record, having already defeated Villanova 70-64 a month ago at Carnesecca Arena.

The game was close throughout, with the lead changing frequently until the fourth quarter. Going into the final frame up 41-40, St. John’s was outscored 29-11 resulting in a Villanova 69-52 Wildcat win.

St. John’s got off to the start it needed defensively,  holding Villanova without a bucket for the first five minutes of the game. Villanova kept pushing through in the start of the second quarter and eventually took an 18-16 lead, their first of the game.

Fresh out from halftime, senior forward Maya Singleton pulled in her 11th rebound, enabling Alisha Kebbe to put the Johnnies in front 34-33 with a put back.

But in the final 10 minutes, Villanova came out firing. They hit 10 of their last 12 shots from the field to secure the win.

Even with the loss, there were several notable performances.

As a team, St. John’s shot 40 percent from the field, but only converted just under 36 percent of their shots in the second half.

On Sunday, the Johnnies closed out the season series with Georgetown with a game at McDonough Arena. Kebbe fueled the St. John’s offense in the first ten minutes of play, scoring eight of the team’s 13 points to help the Johnnies open an eight-point lead.

The team kept the lead consistently throughout the game until the opening of the second half. The Hoyas were able to make it a one possession game on two different occasions.

Over the final 10 minutes of play, the St. John’s was able to run away from Georgetown, scoring 21 points. Singleton recorded another double-double, giving her the Big East lead with 15 on the season.

The Johnnies shot close to 50 percent from the field for the game. The team will come back to Carnesecca to face off against Seton Hall on Friday.