Despite 25 points from Shamorie Ponds, the Red Storm dropped its second straight game. 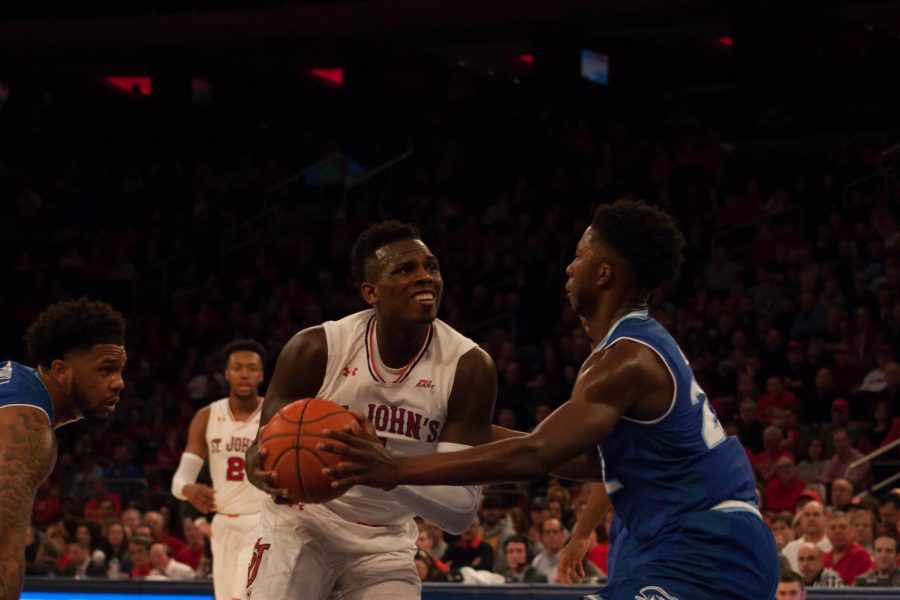 A packed crowd at Madison Square Garden Saturday afternoon watched Shamorie Ponds glide through the lane with 50 seconds to go. As the sophomore guard from Brooklyn took his two step gather, the home bench rose as he did.

A lefty layup from Ponds over Seton Hall Ismael Sanogo tied the game at 68. He hit two free throws 36 seconds later to send the game to overtime.

Then, the memories of an 0-9 January reintroduced themselves, much to the delight of the Pirate fans who made the trip from New Jersey.

In the extra period, Seton Hall outscored St. John’s 11-4 to secure their 20th win of the season.

“I just didn’t feel like we played with any pace or crispness all game,” Mullin said. “It showed more in overtime, but I thought it was a struggle to play with pace and some energy.”

The Red Storm (14-15, 3-13 Big East) lost its second straight game after a four-game winning streak saw them beat then-No. 4 Duke and No. 1 Villanova in a span of four days.

“We didn’t contain the ball too well early on,” Forward Marvin Clark II said after the game. “We started getting some stops…offensive rebounding kind of hurt us. That’s a group effort. On the defensive end, if we’re going to win games, that’s what we have to do to win.”

Clark scored 19 points and grabbed 10 rebounds in one of his best performances of the season. Ponds only had six points at halftime. 19 of his 25 points came in the second half.

“I was missing some good looks, [shots] fell a little short,” he said. “I was just missing.”

Five players finished in double figures for Seton Hall. Khadee Carrington led the way with 22. He scored six points in the final minute of overtime to seal the game.

“We knew St. John’s was playing good basketball,” Carrington said. “We had to come here focused. But we like playing [at Madison Square Garden]. It feels like home to us.”

Center Angel Delgado, who briefly exited after taking an elbow to the head, scored 14 points to go along with 13 boards.

After the game, both coaches addressed Friday’s Yahoo! report detailing the FBI investigation into the NCAA corruption scandal.

Brooklyn Nets guard Isaiah Whitehead, who played under Pirates Head Coach Kevin Willard for two years, was noted as to having received loans of $26,136 and $37,657 under former NBA agent Andy Miller. Willard  spoke of the situation, saying it has not been a distraction for his team.

“The only thing I’ll say is that we’ve already hired an outside law firm to come in and do an investigation,” Willard said. “As a staff and as the head coach, I am looking forward to having them come in. We’re going to be 100 percent open and honest.”

Mullin added that he never experienced any form of corruption during his time as a player at St. John’s, and that he doesn’t have anything to fear as the FBI continues it investigation.

“No,” he said of any possible worries before leaving the podium.

St. John’s will try to split the season series with Butler Wednesday night at Carnesecca Arena. The Bulldogs (19-10, 9-7 Big East) are coming off a 93-70 win against Creighton Tuesday night.