Alum Reflects on His Time at St. John’s and CBS Sports 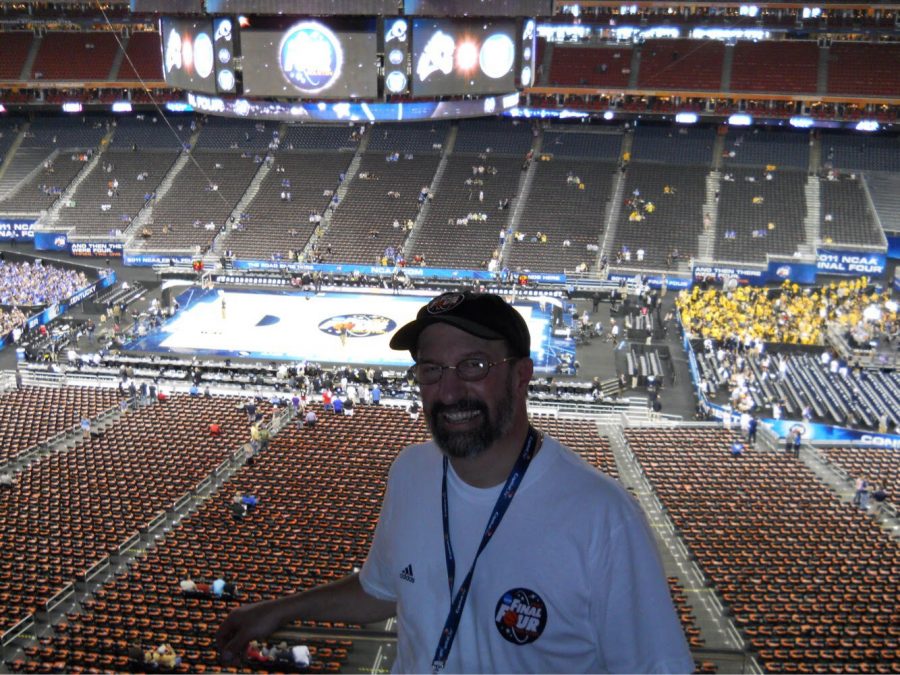 For St. John’s alumnus Vincent DeVito, sports has always been a vital part of his schooling, career and life in general. “I’ve always had a love of sports and playing it, but behind the scenes was more practical,” he said. “As a kid I’d watch football on Sunday and just sit there and watch all the games.”

DeVito chuckled as he reminisces on his past 40 years in the sports industry. A Hicksville, Long Island native, DeVito has always had a deep passion for everything sports,evident in his sport playing years throughout school, many hours as a sport watcher and times working in the sports booth at games in high school.

“If you were to check my batting average, you’d see that I wasn’t getting into school for sports anytime soon,” DeVito joked when  discussing his baseball career in high school.

Before he was a Johnnie, DeVito, like many current college students, was struggling to discover his path as to what exactly he wanted to do. “I was really good at math and science and did well on my tests,” DeVito said. So  my high school teachers said that I should become an engineer.”

DeVito attended University under the premise of being an engineer. “It wasn’t for me,” He said. DeVito discussed how he was going to class and realized that he wasn’t interested in what he was learning.

“Sometimes you realize that what you’re doing at the moment, isn’t what you want to do for the rest of your life, he said” With this decision to change career paths, DeVito decided to drop out of University and entered the work field.”

While DeVito was out of college, he still kept his love for sports, and his obsession with college sports also amplified. He discussed how the remembered watching a college basketball game and saw famed sportscaster Marv Albert talking about the St. John’s Basketball team.

“Marv Albert was the reason I went to St. John’s,” DeVito said.  “He kept talking about how great St. John’s was and I was so interested that I decided to go there.” He continued by adding that Albert’s raving about the basketball program is what got him interested in attending St. John’s.

After some much-needed thinking and searching for what he wanted to do, DeVito decided to attend St. John’s as a communications major at St. Vincent’s College, presently known as the College of Professional Studies. DeVito’s time at St. John’s set him on a path that led to his career in sports with CBS Sports and his success as an award-winning producer.

When asked why he wanted to get into media, DeVito noted his background in playing as a kid and finding himself involved in many ways.

“I’ve always been interested in sports and things like that,” he said. “I played baseball and worked the sports booth at games in high school, but never imagined I could do things like that as a job and in the future. It was all a dream of sorts. I always liked the possibility of being a broadcaster.”

He wasn’t always so sure about doing communications because of the busy career field. “You had so many people who were in industries like film and television, print journalism, and other media,” DeVito said. “But they didn’t know what to do.”

An active participant in student life at St. John’s, DeVito worked at the Sports Informational Desk and at WSJU, the university’s  radio station, as the sports director. He was also a sports writer for the Torch under the guidance of sports editor Howie Schwab.

DeVito got his start in sports media with notable companies like ABC and CBS through what he calls “total happenstance.”

“I was in the right place at the right time,” he said. DeVito discussed how he was working for the sports informational desk k at St. John’s when his boss got a call from ABC asking if anyone wanted to be a sports runner.

“My boss looks to me and asks, ‘Hey, do you know anyone who wants to work for ABC Sports?’” DeVito recalls. “This started my journey working with CBS Sports.”

Reminiscing about his time at St. John’s, DeVito said that the school opened doors for him in his professional career.

“St. John’s has so many great opportunities for me,” he said. “It taught [students] a lot about what we needed to know for the world outside.” He added that the education at St. John’s seems to be even more influential in how it helps to build connections.

“St. John’s has great resources,” he said. “You just have to use them to your ability.”

He stated that one of his most memorable moments at St. John’s was meeting his wife. DeVito met Joyce Boland-DeVito, now St. John’s Professor, during orientation. “We were in the same orientation group, we also worked together at WSJU.”

DeVito’s career with CBS Sports has been a long and remarkable one. He reiterated how he got his start with the company  as a sports runner and would collect information, stats and data to give to producers about college sports.

“It was the start of a real interest in college sports and the networks were scrambling to find people as well informed on them,” he said.

When asked what he did as a producer for CBS Sports, he explained the intricacies of his role, which may be seen by many viewers on television.  “I have to gear up the ad space and revenue and things like that,” DeVito said. “So when you see ad time and wonder how that moves so smoothly, that’s me.”

In a conversation with his wife, Boland-DeVito she joked that they caught a break during January’s big game. ,

“We were so glad he wasn’t working during the Super Bowl when there was that awkward 15-second delay,” she said.

DeVito’s time with CBS has taken him all over the globe. “I’ve covered pretty much everything,” DeVito said.  “Everything except for hockey and golf.”

DeVito’s impressive resume with CBS has included him working several fields, including baseball, March Madness and even the Olympics. “I worked four Olympics, summer and winter,” DeVito said. “I’ve done a few broadcasting things, but they will probably never be seen in the United States since they were international.”

At CBS Sports, DeVito is currently gearing up for March Madness and the final four coverage.

Sitting proudly in his home, DeVito has seven Emmy awards for his career producing at CBS. Each has had an impact on his career, but he doesn’t celebrate the same if he wins more.

“After you’ve won one, the shock goes away,” he joked. “You realize that a lot of people are given this award so it’s not a big deal.”

While the second, third, fourth or subsequent Emmy’s may not have been as impactful, DeVito praised on how his first Emmy is the most spectacular.

“The first one is always the most spectacular, I think it had to do with what I won it for.”

DeVito and his team won an Emmy for Special Programming in 1990 for a program where they took 12 young adults from ages 16 through 19 up Mt. Kilimanjaro. “We took these kids, with special disabilities and had them climb Mt. Kilimanjaro,” he said. “The effort and work that these young teens achieved made it worthwhile as they began the climb.”

DeVito remarks that through all his time with CBS Sports and his stepping stones at St. John’s, he is most thankful for his wife. “I love my wife,” he said.”  “She keeps me on my toes no matter what I achieve. Keeps me humble.”

Still a Johnnie at heart, DeVito watches Red Storm basketball any chance he gets. He too was very excited after the huge wins against Duke and Villanova in February. A big fan of Head Coach Chris Mullin, DeVito added that he wants to see the team get back to its glory days.

“I have hope that Mullin will get St. John’s to a higher tier with our basketball team,” he said. I know Chris can do it.”

Throughout the years in sports and media, DeVito notes how hard it is to get in the field., His final piece of advice was simple, something he has carried with him for many years.

“You know once you get your foot in the door, it’s up to you to get the rest of your body through.”