The Red Storm will host Marist Thursday in the NIT. 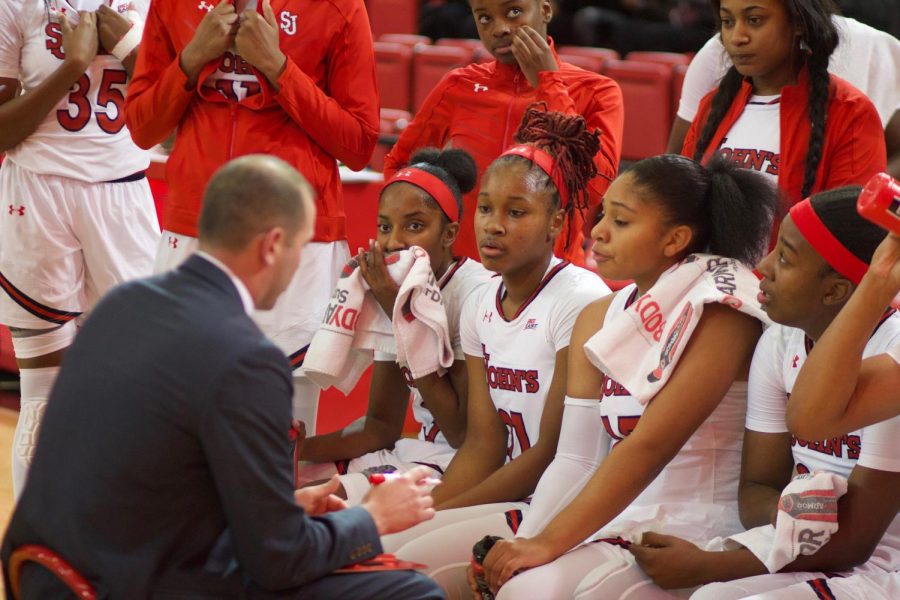 “This is a new feeling for us.”

Those were Joe Tartamella’s words after losing in the first round of the Big East Tournament for the first time since 2010.

Despite strong double digit scoring from three St. John’s players, it wasn’t enough to best Jaylyn Agnew’s 23 points for Creighton en route to a 66-58 win for the Blue Jays.

The game came down to offensive efficiency. St. John’s was struggling to score, only shooting 38% from the field during the game, including an underwhelming 1-6 shooting performance from beyond the arc.

On the other side, Creighton’s offense was clicking. The Blue Jays shot over 47% and converted 50% on their three-pointers.

“We didn’t do a good enough job, I thought, throughout the game, especially in the first half, of executing the things we had gone over throughout the week,” Tartamella said after the loss.

An eight-point halftime deficit was quickly erased after the Johnnies opened up the third quarter on a 9-0 run, anchored by Qadashah Hoppie, Maya Singleton, and Alisha Kebbe.

In Maya Singleton’s last regular season game in a Red Storm uniform, she finished with 18 points and nine rebounds, one rebound shy of what would have been her 17th double-double of the season.

After averaging 11 points and 11 rebounds throughout the season, Singleton earned a place on the All-Big East Second Team.

“Maya has brought energy, intensity, heart. She’s like the glue to all of us,” redshirt freshman guard Tiana England said after the game.

In addition to Singleton’s 18 points, England finished with 16 and Akina Wellere scored 11 points in her hometown of Chicago.

With this loss, St. John’s finishes play with a 16-14 (9-9 Big East) record. Much like the game of basketball itself, it was a season filled with runs and momentum swings.

The Red Storm finished non-conference play with 7-5 record, which included tough losses to top programs South Carolina and South Florida. They stumbled out of the gate in Big East play, losing their first three games before rattling off five wins in a row. They would go 4-6 throughout the duration of conference play.

A key trend for the Red Storm this year proved to be that they were much more comfortable playing at Carnesecca Arena. They amassed a 10-5 home record, including back-to-back home victories in early February against Xavier and Butler that were both won by more than 30 points.

Heading into next year without the dynamic frontcourt of Singleton and Imani Littleton, the Johnnies could possible rely on the backcourt for 2018-2019.

With Hoppie and and England both set to return after strong freshman campaigns, they will be major factors next season.

Hoppie was recently named the Big East Freshman of the Year and England was a unanimous selection to the Big East All-Freshman team.

The strong backcourt for next season will be aided by the return of three key contributors in Kebbe,  Wellere and Andrayah Adams. All three are players who aren’t necessarily volume scorers but can easily put up anywhere from 10 to 15 points a night to help balance the offensive attack.

“I think we’ve come a long way,” Tartamella said. “So I’m pretty happy with effort we give.”

St. John’s will host Marist Thursday night at Carnesecca Arena in the first round of the NIT.